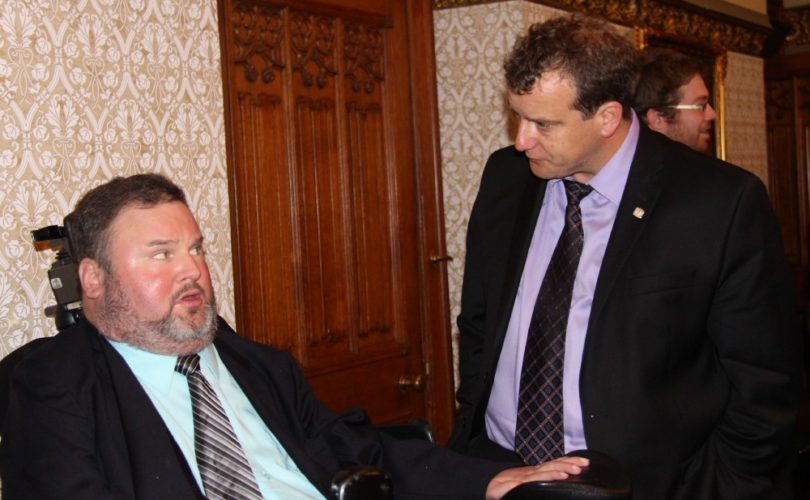 The head of Canada’s largest doctors’ group has called euthanasia an “appropriate” choice under certain circumstances despite the group’s official policy against the practice.

Dr. Chris Simpson, the new president of the Canadian Medical Association (CMA), said euthanasia must not be seen “as a first, or second or even third choice, but a choice that’s appropriate for people after all other reasonable options are exhausted,” reported Postmedia News Tuesday.

While stating palliative care must be made a priority, Dr. Simpson said that some suffering caused by cancer or Lou Gehrig’s disease, for instance, cannot be alleviated by even the best end-of-life care. “Those are some examples of things where, we would all agree if we were in that situation we would be looking for potentially other solutions,” he said.

His comments come one week after CMA’s general council voted 91 percent in favor of a two edged motion allowing physicians to follow their conscience in deciding to provide or withhold euthanasia to a patient within the bounds of legislation.

LifeSiteNews asked Dr. Simpson by phone and email to explain more precisely when he thinks it permissible for a doctor to kill his or her patient and how he would address the ‘slippery slope’ argument against legalizing euthanasia, but did not receive a response.

The CMA’s 2014 policy states that it “does not support euthanasia or assisted suicide.” The group urges its members to “uphold the principles of palliative care.” The current policy makes sense according to the current legal situation where the country’s criminal code prohibits euthanasia and assisted suicide and where offenders can be punished with up to 14 years in jail.

But Alex Schadenberg, executive director of Euthanasia Prevention Coalition, told LifeSiteNews the CMA is deliberately navigating itself into a “neutral position” regarding euthanasia instead of an “opposition position” so that it can adapt its policies to fit the legal landscape if it changes.

The CMA’s position on euthanasia is likely tied to the fate of a case about to be heard before the Supreme Court in October.

In 2012 Justice Lynn Smith in British Columbia struck down the prohibition against assisted suicide in the Carter case, arguing that since suicide is technically legal in Canada, the ban on assisted suicide is “unconstitutional.” The law, she argued, prevents the disabled from getting the help they may need to kill themselves. The decision was appealed by the Conservative government and wound up in the country’s highest court.

If the Supreme Court agrees with Justice Smith, it will have to reverse its 1993 decision in the Rodriguez case in which it ruled 5-4 that the state has a “fundamental interest in protecting human life” and an obligation to “protect the vulnerable.”

Now with this landmark case approaching and Quebec already poised to introduce euthanasia with the recent passage of Bill 52 that calls the practice “medical aid in dying,” doctors across the country are left with the impression that it is simply a matter of time before each will be faced with the personal decision to offer patients a hand that heals or one that also kills.

“Physician-assisted death is going to become legal in Canada in the very near future by one means or another,” wrote Dr. James Downar in a pro-euthanasia piece appearing in the CMA Journal in April. Downar sees that a pro-euthanasia ruling from the court will leave doctors in a legal vacuum regarding the practice and will have similar effects on the medical profession as the 1988 Morgentaler abortion ruling.

The majority of Canadian doctors, however, want nothing to do with the actual practice of prematurely ending the lives of their patients. A poll released this month of about 5,000 CMA members found that while 44.8 percent said physician-assisted death should be legalized, only 26.7 percent said they would be “likely or very likely” to participate if physician-assisted death was legalized.

Schadenberg said that many doctors still respect the traditional position that it is “incompatible with the role of a physician to kill your patient.”

He criticized Simpson’s position that a patient should have the option of euthanasia with safeguards as “living in a utopia.”

Schadenberg pointed to rampant abuses in Netherlands and Belgium where offering euthanasia as a legal choice almost a decade-and-a-half ago has only resulted in a rapid expansion of the categories of the killable to include not only those who experience non-fatal neurological conditions such as depression, but even sickly infants and teenage minors.

Theo Boer, a professor of ethics in Netherlands — who formerly supported the push to legalized euthanasia — is now warning countries to avoiding making his country’s mistake.

“Various safeguards were put in place to show who should qualify and doctors acting in accordance with these safeguards would not be prosecuted,” he wrote in a July letter. “But we were wrong – terribly wrong, in fact.”

Boer highlighted the “explosive increase” in euthanasia deaths since 2001. He noted the “shift” regarding who became eligible to be euthanized, a list that grew to include the “aged, lonely or bereaved.” He pointed out how public opinion went from viewing euthanasia as an “exception” to having it be considered an enshrined right, “with corresponding duties on doctors to act.”

“I used to be a supporter of [euthanasia] legislation. But now, with twelve years of experience, I take a different view,” he said. “Don’t go there. Once the genie is out of the bottle, it is not likely to ever go back in again.”