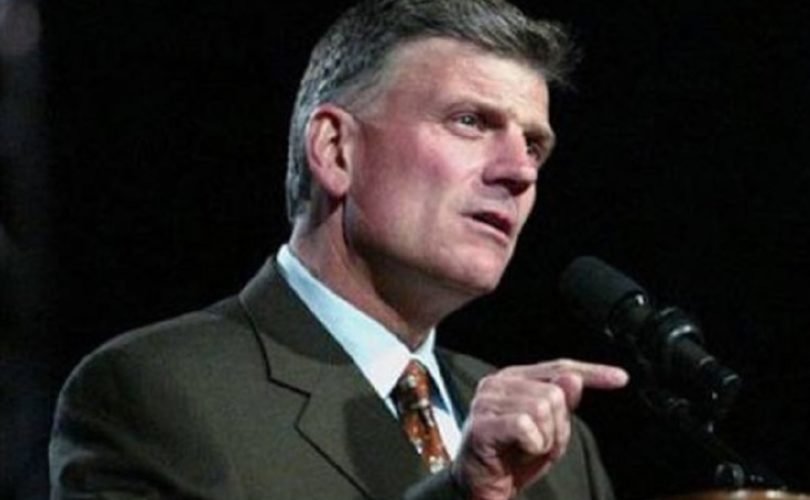 July 17, 2020 (LifeSiteNews) – Popular Christian preacher Franklin Graham stressed the importance of the November presidential election, arguing that “media powers are putting forth every effort to spin the story and sway the thinking of the American people.”

“In her resignation letter, she said that it was very difficult to get anything published that did not ‘explicitly promote progressive causes’ and if something was published, it could happen only ‘after every line is carefully massaged, negotiated and caveated,’” the preacher explained.

“That’s very telling,” he added. “The founder of the Media Research Center said that her resignation makes the point that journalism is dead at The New York Times and it’s been replaced by censorship that is controlled by radicals.”

Weiss had sent her resignation letter to Times publisher A. G. Sulzberger on Tuesday.

“Why edit something challenging to our readers, or write something bold only to go through the numbing process of making it ideologically kosher, when we can assure ourselves of job security (and clicks) by publishing our 4,000th op-ed arguing that Donald Trump is a unique danger to the country and the world?” she asked rhetorically. “And so self-censorship has become the norm.”

She also mentioned that the newspaper essentially used Twitter as “its ultimate editor. As the ethics and mores of that platform have become those of the paper, the paper itself has increasingly become a kind of performance space. Stories are chosen and told in a way to satisfy the narrowest of audiences, rather than to allow a curious public to read about the world and then draw their own conclusions.”

Her own experience of the corporate culture was thoroughly negative. “My own forays into Wrongthink have made me the subject of constant bullying by colleagues who disagree with my views,” Weiss revealed. “They have called me a Nazi and a racist; I have learned to brush off comments about how I’m ‘writing about the Jews again.’ Several colleagues perceived to be friendly with me were badgered by co-workers.”

According to a Rasmussen Reports poll, “most voters are eager to find fair and balanced media coverage but think the majority of news organizations these days are politically biased.”

Graham summarized the state of the media in this country by saying, “In years past, Americans were able to trust media; they were journalists reporting facts. But today many media organizations are biased, slanted, and extremely agenda driven. They are no longer trustworthy.”

Accordingly, he said to his predominantly Christian audience on Facebook, “we must be very careful about what information we believe. We have a very important election coming up, and media powers are putting forth every effort to spin the story and sway the thinking of the American people.”

Graham’s remarks came on the heels of another prominent evangelical leader, Jerry Falwell Jr., president of Liberty University, saying he believes support for President Donald Trump among evangelicals is even stronger now than it was in 2016.

Falwell had told Breitbart News Tonight host Matt Boyle that he suspects support for Trump within the evangelical community could be even higher than indicated by a recent Democracy Institute/Sunday Express poll that found that 90 percent of Evangelicals supported Trump’s re-election.

“Every Evangelical I’ve run into at every major event has (told me), ‘We were hesitant. We thought you were a little nuts for supporting (Trump) in 2016, but we are 100 percent behind him now,’” Falwell said. “It doesn’t surprise me a bit. It wouldn’t surprise me if it was higher than 90 percent.”

Falwell, who was one of Trump’s most prominent Evangelical supporters during the 2016 presidential campaign, also said he believes that large support from the African-American community for Trump at the election is “going to shock everybody.”

Falwell and Boyle discussed the possibility of there being several Supreme Court openings during the next four-year presidential term, which Trump would be able to fill with his nominees.

Only days ago, far-left Supreme Court Justice Ruth Bader Ginsburg, who supports even partial-birth abortions, was hospitalized for a short time. At 87 years old, Ginsburg is the oldest of the nine justices.

Falwell highlighted the significance of future judicial nominations for evangelicals, saying they are the “one place the president can make a difference on social issues.”

Both Graham and Falwell are members of the second generation of high profile, politically involved evangelical leaders. Graham’s father was Billy Graham, the most well-known among Christian preachers. Falwell’s father, also named Jerry, founded the Moral Majority, a political movement that played a key role in electing Republicans to the presidency in the 1980s. Falwell also launched Liberty University.