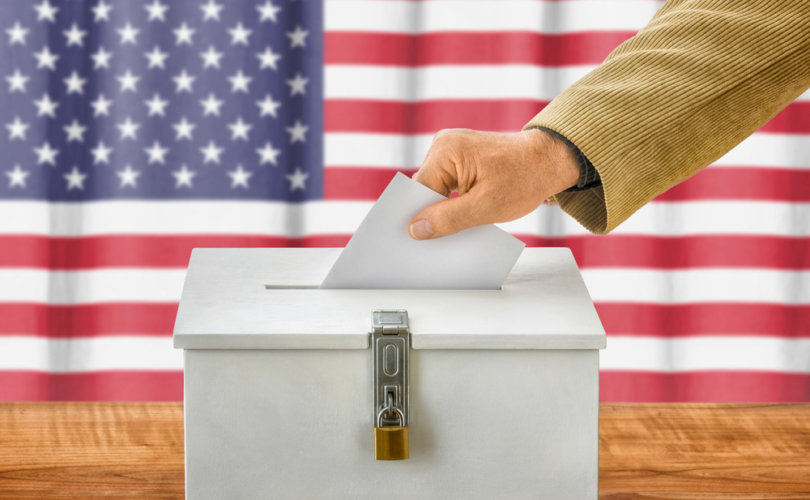 COLORADO SPRINGS, Colorado, Aug. 2, 2018 (LifeSiteNews) — An American evangelical powerhouse is urging Christians in the United States to make their voices heard at the ballot box or possibly face the same kind of losses to freedom as in Canada.

“We must vote, vote, vote to elect leaders who will defend what has been purchased with the blood of patriots who died to protect our liberty,” writes Dr. James Dobson, founder and president of Family Talk, in his August newsletter.

The highly-influential evangelical’s exhortation to vote comes as America gets ready to head to the polls for the Nov. 6 midterm election that will see all 435 seats in the House of Representatives and 35 Senate seats up for grabs.

Two years ago, Republican candidate Donald Trump took the White House in an election that saw only 55.7 percent of Americans of voting age cast their ballots. That was down from 62.3 percent of Americans of voting age who took part in the 2008 U.S. presidential election and far below the level of voter turnout in many other industrialized nations.

In Denmark, Belgium and Sweden, more than 80 percent of citizens of voting age cast their ballots in their last elections. New Zealand and Australia both had voter turnouts of more than 75 percent.

At just a tad above 62 percent, Canada’s voter turnout is close to that of its neighbor to the south.

And the political happenings in the Great White North should serve as a warning to American Christians, noted Dobson.

“Let me illustrate what can happen in a country that doesn't respect basic human rights as they have been understood historically,” he writes in his newsletter. “The Parliament of Canada, our neighbor to the north, passed an act into law on June 19, 2017. It is called the [transgender rights bill], and it imposes jail time and fines on anyone who uses inappropriate pronouns with regard to gender identity, gender expression, race, national or ethnic origin, color, religion, age, sex, sexual orientation, marital status, family status, genetic characteristics, disability or conviction of an offense for which a pardon has been granted.

“Forget laws protecting freedom of speech,” wrote Dobson. “Violations of this act are considered to be hate crimes in Canada's Criminal Code. Its passage has been lauded by Prime Minister Justin Trudeau as ‘another step toward equality.’ No! It is a step toward tyranny for our Canadian friends.”

Although Americans and citizens of other western nations are not yet facing similar tyranny, a growing political correctness in the mainstream media influences elections and can lead to the loss of much-cherished freedoms in West, warned Dobson.

“America and other western nations have for decades been losing their God-given rights that define us as a free people,” he wrote. “We are not experiencing Nazi-like tyranny yet, but we are steadily being expected to think, speak, write, and act in a prescribed manner in conformity with what is now called ‘political correctness.’ The mainstream media has become a tool to influence elections and spread this belief system.

“Sadly, the rights handed down to us by our forefathers more than 200 years ago are gradually being overridden, ignored, contradicted, or disregarded by the courts and legislature. Alas, we are less free now than we were even five years ago.”

Chiding the desperation of the political left in America for going so far as to mock Supreme Court of the United States nominee Brett Kavanaugh for such trivial matters as putting ketchup on his food, Dobson makes it clear that Christians must beef up their political clout.

“So far, President Donald Trump has nominated 44 judges who have been confirmed to the bench, and there are many others (88) in the pipeline,” wrote Dobson. “There is hope for additional conservative and common-sense decisions to be handed down in the future. This is a matter for sincere prayer among those of us who have longed for relief from judicial tyranny.”