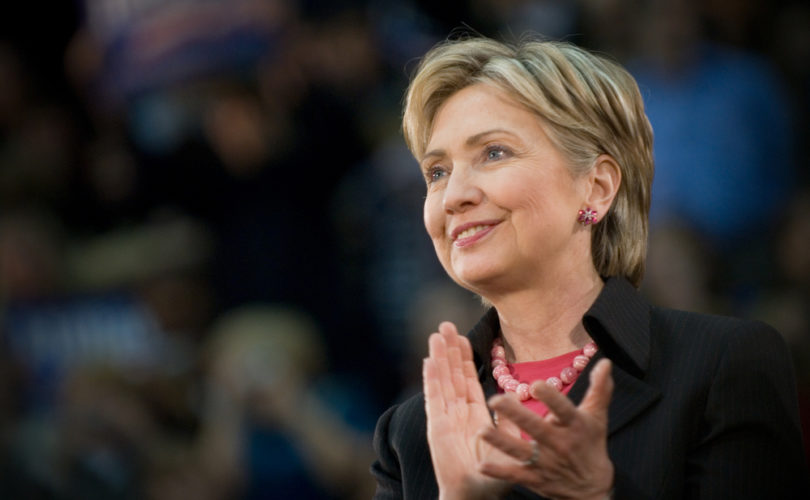 WASHINGTON, D.C., April 21, 2015 (LifeSiteNews.com) – A national evangelical Christian leader has written that his fellow believers should vote for Democratic presidential hopeful Hillary Clinton, because she will radically reduce the abortion rate.

Hillary, in whose campaign abortion industry lobbyists play a conspicuous role, favors abortion-on-demand throughout pregnancy. Yet Tony Campolo believes a second Clinton presidency will halve the number of abortions nationwide.

“Hillary Clinton is one of the few candidates on the political stage who has a plan for cutting the abortion rate in America by at least 50 percent,” Campolo, a sociology professor emeritus at Eastern University, wrote in a debate on Religion News Service on April 13.

His piece, entitled “Why Christians Should Vote for Hillary,” admitted that “some of my Evangelical friends raise questions about her views on abortion,” but that is misplaced.

“Abortions will not be ended through legislation,” he wrote. Instead, America needs a president committed to implementing interventionist economic programs and “diminishing the urgency that drives so many oppressed women into having abortions.”

Campolo, who acted as an adviser to President Bill Clinton following his affair with Monica Lewinsky, praised Hillary's faith and role as a committed wife.

“I know Hillary Clinton to be a committed Christian,” because she “was one of the most faithful attendees of the Senate’s weekly prayer meetings,” he vouched.

Her decision not to divorce Bill Clinton after his serial philandering went public, he said, “showed that the promises she made to her husband on their wedding day were binding through better and worse.”

On the subject of marriage itself, Campolo favors government-recognized civil unions for homosexuals. Hillary recently endorsed same-sex “marriage” as a constitutional right.

In the opinion piece for the liberal religious news outlet, Campolo extolled Hillary's public record from her days as first lady of Arkansas through her service as Secretary of State, calling her a “brilliant negotiator.” Although she was “by no means perfect in making policy decisions,” particularly her decision to vote for the authorization of the use of force to topple Iraqi dictator Saddam Hussein in 2002, she is committed to “progressive” policies, and “her future carefulness will keep her from making that kind of mistake again.”

“As a pro-life Democrat, I am encouraged by the possibility that Hillary could be our next president,” he concluded.

Hillary Clinton has attempted to present herself as an evangelical, saying last year that “the Bible was and remains the biggest influence on my thinking.” However, enthusiasm is notably absent from most Christian brethren, among whom Clinton polls poorly. Her record on abortion and other social issues contradicts their most deeply held views.

When Bill Clinton vetoed the partial birth ban, which passed the Republican-controlled Congress, he said that he and Hillary had prayed about it before killing the life-saving legislation. As a U.S. senator, she earned a 100 percent voting record from NARAL Pro-Choice America, including votes against the partial birth abortion ban, parental notification, and in favor of expanding embryonic stem cell research.

During her 2008 presidential campaign, the pro-life group Democrats for Life of America deemed her “pro-choice in all circumstances,” adding that Clinton was “not directly opposed to physician assisted suicide.”

In his rebuttal to Campolo, National Review writer David French also questioned her competence, dismissing her eight years in the U.S. Senate as “undistinguished at best, with no notable legislative accomplishments” and casting doubt on her tenure as the Obama administration's top diplomat.

“After the United States launched an undeclared air war to drive Muammar Gaddafi from power” in Libya, Obama and Clinton “so mismanaged the transition of power that the American ambassador and three other brave Americans were not only killed, but jihadists drove Americans from our embassy and later filmed themselves swimming in the ambassador’s pool,” he wrote.

“In Egypt, the United States actually backed the Muslim Brotherhood – the same organization that helped launch al-Qaeda and Hamas,” he added.

Clinton's tenure as Secretary of State was so light that she once boasted the U.S. Embassy “played an instrumental role in bringing Lady Gaga to Italy” for a gay pride concert in Rome.

Although she seems unlikely to have the same appeal among evangelicals that her husband did, Hillary is considered the likely 2016 Democratic nominee. Potential challengers including Martin O'Malley and Elizabeth Warren likewise favor abortion-on-demand, often at taxpayers' expense.

None of the declared or likely Republican presidential candidates support abortion.