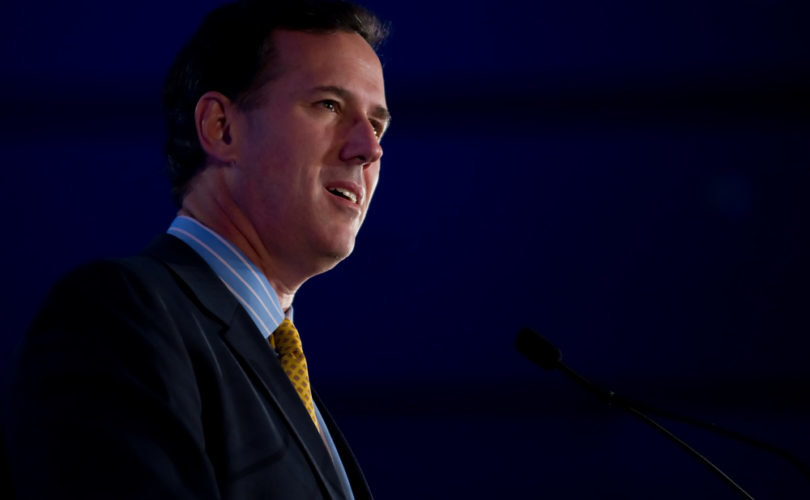 CABOT, PA, May 27, 2015 (LifeSiteNews.com) – Many questions surrounded today's announcement that Rick Santorum is running for the Republican presidential nomination, but none of them were about where he stands. Santorum, who is well known as a rock-ribbed social conservative, emphasized the value of life and family in a campaign kickoff that played up the senator's blue collar economic message.

Surrounded by his wife, Karen, and six of his seven living children, Santorum began by introducing “our sweet daughter Bella, who just turned seven a couple of weeks ago.” Bella, who has beaten the life expectancy of a child born with Trisomy-18, smiled broadly as the audience applauded her.

The senator still spoke about life and faith, issues that came to define him in 2012. “As president I will stand for the principle that every life matters – the poor, the disabled, and the unborn,” he vowed. Touting his record, he said, “I went [to Washington] to end partial birth abortion, and I delivered.”

Taking aim at Barack Obama's reduction of the First Amendment to a “freedom of worship,” Santorum said, “I will also fight for the freedom for you to believe what you are called to believe, not just in your places of worship but outside your places of worship, too.” The message comes amid a brewing controversy over religious business owners being forced to participate in homosexual “weddings” or be sued, perhaps prosecuted by the state. Some of his fellow Republicans have shied away from backing religious freedom legislation to ensure those rights.

The message was further driven home by the speech's backdrop. Penn United Technologies, an oil and gas manufacturing company, was founded as a “Christian company” and proclaims, “We exist to glorify God.”

Standing before his hometown of Cabot in western Pennsylvania, Santorum promoted “stronger families” through better schools. “Every child deserves her birthright to be raised by her parents in a healthy home,” he said. “The first step in that process is to join with me to drive a stake in the heart of Common Core.”

Yet everything about Santorum's message sought to broaden his support beyond social issues by placing economic populism at the heart of his message.

From a dais surrounded by industrial equipment, Santorum held up a large piece of coal and an American flag as symbols of the nation's one-time industrial might and her enduring freedom.

His grandfather emigrated from Italy to mine coal and seek freedom. “My dad grew up in a coal town, actually a company town, with no indoor plumbing,” he said.

Men like his grandfather “built this nation” through selfless toil. But the Rust Belt suffered “economic devastation…particularly in the area of manufacturing, as a result of the excesses and indifference of Big Labor, Big Government, and yes, Big Business.”

An outsourcing economy left American workers bloodied by a steady erosion of jobs, and “both parties left them behind on the economic battlefield,” he said. “They had no plan, and they provided no hope. And to that I say: No longer.”

He proposed an economic plan to revive American manufacturing, the heart of the middle class for much of the last century. He also pledged “to give America a simple, fair, flat tax.” He is scheduled to unveil his “20/20” economic proposal shortly.

The former senator from Pennsylvania opposes free trade agreements like the Trans-Pacific Partnership (TPP), backs policies to revive U.S. manufacturing industries, and supports a modest increase to the minimum wage.

To massive cheers, he also promised that, as president, he “will revoke every executive order and regulation that costs American jobs,” such as Barack Obama's carbon emissions standards, which threaten to shutter the nation's traditional, coal-burning energy plants.

As manufacturing jobs have been exported, low-wage workers have arrived on American shores to take the remaining jobs, he said. “Over the last 20 years, we’ve brought into this country – legally and illegally – 35 million mostly unskilled workers. And the result? Over that same period of time, workers' wages and family incomes have flatlined.”

“Hillary Clinton and Big Business” – names booed almost as harshly as Bella had been cheered – “have called for a massive influx in unskilled labor,” Santorum said. “Their priorities are profits and power. My priority is you, the American worker.”

Santorum's immigration plan calls for reducing legal immigration from the record-high level of one million a year to 750,000 annually. NumbersUSA, an immigration reform group, gave Santorum a B-minus for his overall Congressional record.

“We can't succeed unless we strengthen the first economy, the American family,” he said.

Santorum also burnished his hawkish foreign policy credentials. “As you've seen, commander-in-chief is not an entry-level position,” he said, underscoring his commitment to maintaining a close relationship between the United States and Israel. He has not feared to propose new wars, including sending 10,000 ground troops to the Middle East to fight the Islamic State (ISIS). Santorum said if Islamic fundamentalists “want to return to a 7th Century version of Islam, then let’s load up our bombers and bomb them back to the 7th Century.”

The emphasis, if not the issues, are different than his last race four years ago against Mitt Romney, when the 57-year-old won contests in 11 states and received nearly four million votes.

Despite a vote count marred by irregularities that included county vote totals mysteriously going missing, Rick Santorum actually won the 2012 Iowa caucuses by a razor-thin, 34-vote margin. However, the results were not announced for more than two weeks, which prevented him from becoming the anti-Romney candidate during the early weeks of the race.

“You gotta do well in Iowa,” Santorum told George Stephanopoulos today. “You gotta win on election night, as opposed to two weeks later.”

This time out, he will vie for their support against fellow Iowa caucuses winner Mike Huckabee, as well as Ted Cruz, Bobby Jindal, Dr. Ben Carson, and Rick Perry.

That backing will be vital, since the first GOP presidential debate will be limited to the top 10 candidates in the polls. With today's announcement, Santorum became the seventh Republican to officially announce that he is running for president. However, many others are expected – including an announcement on Thursday from former New York Gov. George Pataki, who calls himself a “pro-choice” Republican.

Although the Republican Party often rewards those who run a second or third time – such as Richard Nixon, Ronald Reagan, Bob Dole, John McCain, and Mitt Romney – Santorum's polling numbers leave little room for anything but improvement. Yet he rests with confidence in his positions, his hard-working campaign style, and in his Catholic faith.

The conclusion of his speech came full-circle, as he asked his supporters to intercede for divine guidance. “There's much that we can do, but first we need to pray for the same kind of Great Awakening that inspired our founders to come to this country, and heal our land,” he said.

“Karen and I have learned a lot in our lifetime. If there's one thing we have learned it is that man is limited, and God is not,” he said.

“The last race we changed the debate. This race, with your help and God's grace, we can change this nation.”