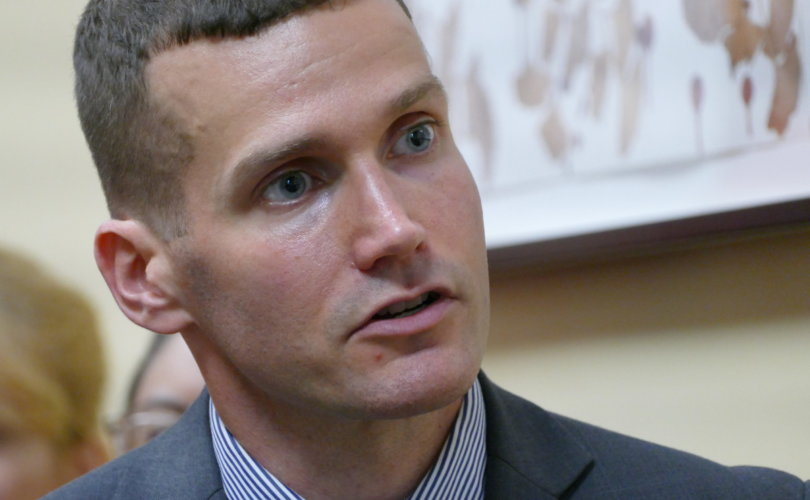 Hanson lived an idyllic life. After successfully graduating from college with a degree in political science and public service, he served his country in Iraq. He and his beautiful wife Kristen had a healthy and energetic son. Then tragedy struck.

On May 13, 2014, Hanson was diagnosed with glioblastoma multiforme, an inoperable malignant brain tumor. “Three different doctors told me there was nothing that they could do,” he recounted.

Understandably, Hanson fell into an overwhelming depression. “When I was diagnosed with terminal brain cancer … I went in an instant from living the American Dream … to living a nightmare,” he confided.

He was told he had only a very short time to live and would probably be dead in four months. He was told he “couldn’t beat the disease.”

“I’m thankful I don’t live in a state like Oregon, where assisted suicide is legal,” the former administrative assistant to former New York Gov. David Paterson admitted, because “in that moment of depression, I might have chosen to end my life.”

“I could identify with what Brittany Maynard was dealing with,” Hanson sympathized with the famous 29-year-old Oregonian who killed herself legally in 2014. “The same disease. Roughly the same age. We both had families,” he said. “But I don’t agree with what she chose to do.”

The two chose polar opposite paths. While Maynard chose to kill herself, Hanson chose to live. “I knew that you didn’t have to end your life to die with dignity,” he said.

Hanson did live, beyond anyone’s expectations. It has now been three years since his terminal diagnosis. He has spent those three years fighting for time with his sons and wife. “Every single part of my day, I spend toward improving my ability to live,” he said.

So far, Hanson is winning the battle. “I’m still alive three years after I was told I had only a few months to live,” he proclaimed. “There’s no sign of cancer within the brain.”

Hanson now speaks out against assisted suicide. “How can we let our life-and-death decisions rest on these prognoses, when even the most experienced doctors are often wrong?” he asked.

In essence, his message is that killing oneself is selfish. Assisted suicide is “not just about one individual,” he said. “It affects multiple people on multiple levels. … We should be working to help them find a better alternative.”

“If those pills had been available when I was going through my most difficult time, I can’t say that I wouldn’t have taken them,” he admitted.

He argues, as pro-lifers do, that assisted suicide does not respect the sanctity of innocent human life, and gives researchers and philanthropists no incentive to find cures or help for sufferers.

The former Marine advises the disabled, the terminally ill, and the depressed to fight , rather than to give in to the temptation to give up. “You can’t unmake that choice,” he warned. “Once you do it, it’s done.”

Updates on Hanson’s fight may be found on his webpage.

Hanson noted that a quarter of patients requesting assisted suicide were in a major depression, according to a 2008 study in the British Medical Journal. Yet he points out that only four percent of patients considering suicide were referred for psychological evaluation.

He concluded that people are too easily proscribed death instead of the mental health help they need.

What’s worse, insurance companies are getting hip to the fact that assisted suicide is cheaper than prolonged medical care. Cases are increasing of patients being denied treatment while suicide gets covered.

Stephanie Packer, a California mother of four suffering with scleroderma, complained that her insurer denied coverage for chemo but allowed coverage for her to kill herself.

Dr. Brian Callister shared that two of his patients were denied life-saving cures and instead offered suicide prescription coverage.

Hanson’s experience led him to found the Patients Rights Action Fund, which seeks to “protect the rights of patients and people with disabilities by opposing assisted suicide legalization efforts.”

“Every single day is a gift,” he concluded, “and you can’t let that go.”