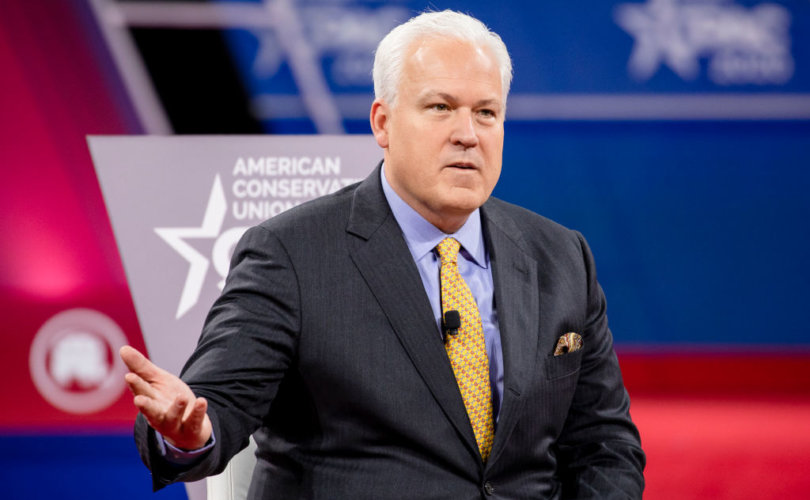 ORLANDO, Florida (LifeSiteNews) — The chairman of the American Conservative Union, which hosts the annual Conservative Political Action Conference (CPAC), is facing fire from pro-life leaders over the event’s absence of a pro-life panel.

The annual conservative gathering, held this year in Orlando, did not have any pro-life panels at the February 24–27 event because Chairman Matt Schlapp chose to cut them out himself, according to comments he made in an interview with NTD News, an Epoch Times affiliate.

The interviewer asked why CPAC did not host a pro-life panel.

“Yeah, we know, we always say every year we should have a pro-life panel, and I broke that,” Schlapp said. “I think everything is pro-life,” and that’s why he said he “did not want a pro-life panel.”

“Everything should be life affirming,” Schlapp added.

After commenting that the conference has hosted speakers who support abortion, he ended by reiterating that pro-life issues were “imbued” in the program lineup.

His comments drew criticism and a lengthy Twitter thread from Alison Centofante, a pro-life communications specialist who has worked for Alliance Defending Freedom, Concerned Women for America, and Live Action. Other pro-life leaders took issue with Schlapp’s comments.

“Oddly, this year, not a single speaker or session focused on abortion. Not one on the threat to women’s sports,” Centofante wrote. “Not one on religious liberty[.] Not one on family, marriage, sex trafficking, pornography, etc.”

She took issue with the titles of sessions that she said seemed like “click bait headlines,” including “The Moron in Chief” and “Obamacare Still Kills.”

“I’m not a fan of publicly airing private movement problems, and asked for answers privately, but soon saw this interview with the head of CPAC, saying it’s ok not to include prolife speakers + that it was his decision to cut the topic,” she wrote.

“The right to life is a key tenant [sic] of conservative values. The acknowledgment that every life has value is something one side uniquely claims to believe,” she wrote. “I can’t let CPAC or conservative leaders play down the seriousness of abortion.”

“It’s incredibly sad that after 40+ years of advocacy, to have a very prominent conservative leader cancel prolife speakers and publicly claim that prolife can mean anything,” Centofante said. “To be prolife has to be anti-abortion because abortion kills children and destroys families.”

“I know in my heart Matt knows this. He’s heard the message for years. He’s a father of 6 GIRLS [five],” she wrote. “I just wonder why the change this year and hope CPAC can course correct.”

Pro-life activist and former Planned Parenthood director Abby Johnson said CPAC hasn’t “had a prolife keynote in several years,” in response to Centofante’s tweets. “People have got to start calling this out and STOP giving them money until they rectify this problem. Being conservative means being prolife … period.”

People have got to start calling this out and STOP giving them money until they rectify this problem. Being conservative means being prolife…period. Stop showing up. Stop sponsoring. The movement deserves better.

Schlapp also faced criticism for referring to gender dysphoric male swimmer Lia Thomas as “her” in a tweet. He clarified to The Daily Wire that he does not believe people can change their genders.

Schlapp’s follow-up tweet, in which he criticized the “left’s war on gender,” drew further pro-life criticism.

“Why is it so easy for @CPAC to take a public stand on gender but then @mschlapp thinks they shouldn’t take a public stand against the violence of abortion? Don’t let what lands you on Fox the most dictate your values,” Students for Life of America President Kristan Hawkins wrote on Twitter.