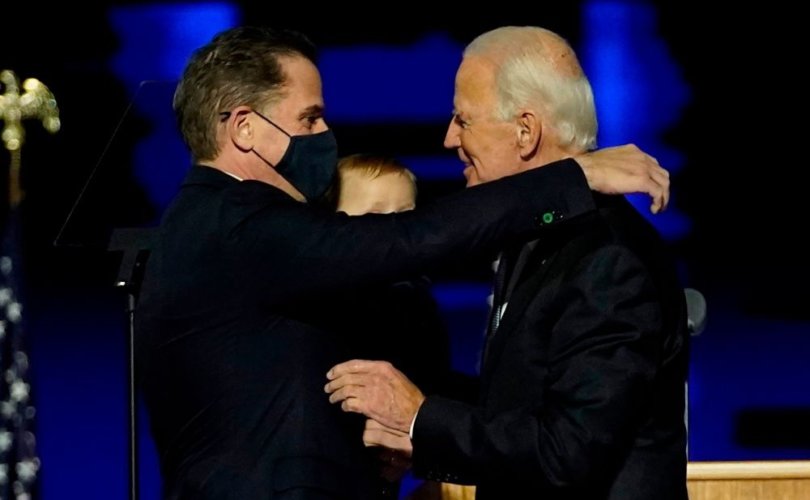 (LifeSiteNews) — Voicemail obtained by The Daily Mail appears to disprove claims by U.S. President Joe Biden that he was unaware of son Hunter’s shady business dealings in foreign countries.

Evidence pulled from an abandoned laptop belonging to Hunter suggests that the president’s son was engaged in high-profile influence-peddling schemes in countries including China, Russia, and Ukraine while his father was Vice President of the United States.

In one such scheme, the younger Biden appears to have secured a deal with Chinese oil executive Patrick Ho, who Hunter had referred to as “the f***ing ‘spy chief of China’” in a recording found on the abandoned laptop’s hard drive.

In 2018, The New York Times ran a story regarding Hunter’s dealings with Chinese oil company CEFC.

Ho, a “top lieutenant” of CEFC under chairman Ye Jianming, had been “convicted in the U.S. for bribing African officials to help Iran evade oil sanctions,” The Daily Mail reported.

“Files on Hunter’s abandoned laptop previously disclosed by DailyMail.com show that he struck a deal with the Chinese company worth millions of dollars after touting his family connections,” the outlet reported.

On December 12, 2018, according to the outlet, Joe Biden left a voicemail for Hunter, assuring him that the Times story was “good,” and that Hunter was “clear.”

“Hey pal, it’s Dad. It’s 8:15 on Wednesday night. If you get a chance just give me a call. Nothing urgent. I just wanted to talk to you,” Biden told Hunter in the voicemail, according to The Daily Mail report.

“I thought the article released online, it’s going to be printed tomorrow in the Times, was good,” he continued. “I think you’re clear. And, anyway, if you get a chance give me a call. I love you.”

The Daily Mail noted that the voicemail was pulled from a backup of Hunter Biden’s iPhone, which had been stored on his laptop.

The contents of the voicemail appear to contradict the current president’s repeated denials that he ever spoke with his son regarding his overseas business dealings.

In April, then-White House Press Secretary Jen Psaki shot down a reporter’s allegation that Biden had discussed business with his son, backing up the president’s 2019 claim that he had “never spoken” with Hunter about “his overseas business dealings.”

Joe Biden: “I’ve never spoken to my son about his overseas business dealings. Here’s what I know — I know Trump deserves to be investigated… You should be looking at Trump. Trump’s doing this because he knows I’ll beat him like a drum.” https://t.co/yrMdiaBli8 pic.twitter.com/yGhipRo1ew

The voicemail is the latest piece of evidence that continues to build the case that Hunter Biden was profiting from his influential father’s position in U.S. politics.

In March, The New York Times made waves by admitting in a comprehensive report on the federal probe into Hunter Biden’s tax filings that the laptop and its shocking contents were indeed real.

The laptop had been labeled “Russian disinformation” by legacy media outlets and left-wing politicians and widely censored on social media platforms after it was publicized by the New York Post just ahead of the 2020 presidential election.

Many conservatives believe the censorship of the story, which suggests that Hunter Biden leveraged his father’s political influence for profit, unfairly tilted the 2020 election in favor of Joe Biden.