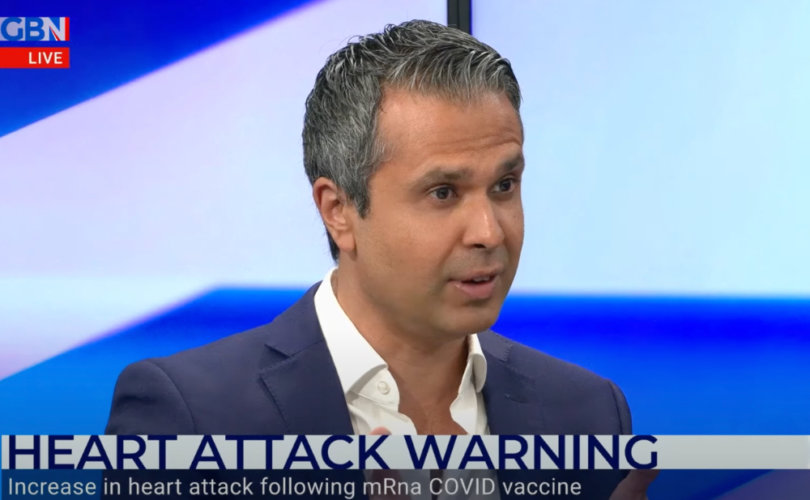 (LifeSiteNews) — A world-renowned cardiology expert warned of a link between the hastily developed COVID-19 injections and heart disease. He said on UK television that cardiology researchers have found evidence to support this, but are too afraid of losing money from the drug companies to publish the proof.

Gundry’s paper revealed that following the mRNA COVID injections, the chance of developing heart disease jumped from 11% to 25%.

“Now what this research has shown, is that markers associated with increasing the risk of heart attack and probably even progression of underlying heart disease in people who have already got some heart disease, have seen a significantly increased risk (of heart attack) from 11% at five years to 25%,” observed Dr. Malhotra. “Now that’s a huge increase.”

Adding that the findings were “very concerning indeed,” Malhotra said Gundry’s findings were corroborated by researchers in U.K. cardiology departments, who were too afraid to publish their own findings, in case they were financially penalized by drug companies.

“Somebody from a very prestigious British institution, a cardiology department researcher, a whistleblower if you like, contacted me to say that the researchers in this department had found something similar within the coronary arteries linked to the vaccine, inflammation from imaging studies around the coronary arteries. They had a meeting, and these researchers at the moment have decided they’re not going to publish their findings because they are concerned about losing research money from the drug industry.”

This testimony was further supported by “anecdotal evidence” from Malhotra’s colleagues in the cardiology community “across the U.K.,” who had told him how “they are seeing younger and younger people coming in with heart attacks.”

The U.K. has seen close to 10,000 excess non-COVID deaths since July 2021, leading Carl Heneghan, Professor of Evidence Based Medicine at Oxford University’s Nuffield Department of Primary Care, to call for an “urgent investigation” into the cause of these deaths. “Most of those, or significant proportion of those, have been driven by circulatory disease, in other words heart attack and stroke,” attested Malhotra, who, aged 44, has an already distinguished medical career.

Noting also the increase in people dying at home, a rise of 30%, Malhotra stated that “often these are because of cardiac arrest.

Calling upon the Joint Committee of Vaccines and Immunization to “absolutely investigate this,” Malhotra also implored the cardiology researchers to publish their findings.

“I really hope that they take a look in the mirror and realize … that they should publish this stuff because their duty primarily is the patients, not the interests of the drug industry.”

‘Put an end to the mandates’

Since the signals linking the COVID injections to heart disease are now “so strong,” Malhotra called for an end to injection mandates, saying, “I think if this signal is strong, and if it’s correct then history will not be on their side, and the public will not forgive them for it.

“This is very concerning. It needs investigating and hopefully it can be resolved very soon.”

Many people are putting their careers and reputations on the line to make sure the truth is heard. Scientific research should never be censored. https://t.co/xmXCKwJuJM

REPORT: Injections of experimental mRNA linked to increase risk of heart attack.
The injection program should be halted immediately. Over 99.9% of people can fight coronaviruses effectively with their own natural immune systems. https://t.co/6TFnfTSvE2

While 18,853 reports are deaths, a total of 19% of deaths were related to cardiac disorders, while a further 13,327 cases of myocarditis and pericarditis have been reported, with 9,332 heart attacks.

The true number of post-injection adverse events is likely to be much higher, however, as a 2010 report submitted to the U.S. Department of Health & Human Services’ Agency for Healthcare Research and Quality warned that VAERS caught “fewer than 1% of vaccine adverse events.”