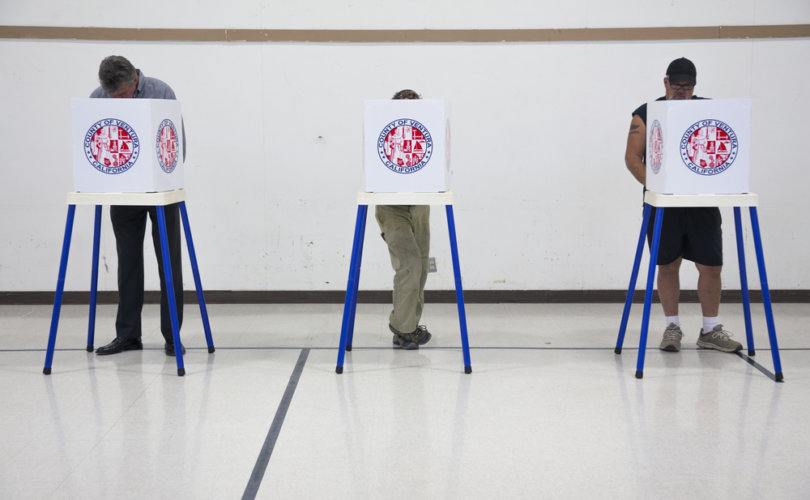 The findings were initially cited in reports of swing state voting patterns compiled by John Droz, a physicist and founder of Alliance for Wise Energy Decision in North Carolina. Droz described the reports to LifeSiteNews as the work of “a team of statistical experts (PhDs) who expressed an interest to working on this topic of national importance, for free.”

In an analysis of Michigan’s 2020 results, two statisticians working with Droz, Dr. William M. Briggs and Thomas Davis, found that absentee vote results for Republicans and Democrats appear to “track one another” in several counties.

Briggs, a former professor at Cornell Medical School, and Davis, an IT entrepreneur and former Michigan State University professor, say that the findings indicate fraud. They confirmed to LifeSite that courts may never have seen the data.

Brigg and Davis said that while Michigan’s high level of absentee voting among Democrats in 2020 didn’t raise suspicions, patterns at the precinct level did, with suspicious correlations between the percentages of votes for either major party that were cast by absentee or mail-in ballots.

They pointed to Ingham County, citing Ingham’s 2016 absentee vote data as an example of “what normal results should look like.”

“Note the irregularities that occur: some precincts are higher for [Republicans] some are higher for [Democrats],” they said. “More importantly, the difference between the two [Republican minus Democrat] varies widely — from plus to minus. In other words: neither the red line nor the blue line has a discernable pattern.”

Unlike the 2016 data, the results from the 2020 election do evidence a “discernable pattern,” Briggs and Davis said, calling the comparison between the results “dramatic.”

“There is no apparent legitimate explanation for the two absentee lines to be tracking each other like that — other than it being due to a computer algorithm,” they continued.

Graphs of election data from Michigan’s Macomb and Oakland counties included in the report show the same pattern. Briggs and Davis flagged a total of ten Michigan counties as problematic, although many jurisdictions didn’t post relevant data, they said.

Michigan was far from the only state affected by suspicious correlations in absentee vote results in 2020, Davis told LifeSiteNews. In a report provided to LifeSite, he outlined similar issues in dozens of counties across twenty states, including nearly all battleground states.

“From a statistical perspective these are independent variables — which have no relationship with one another,” Davis said of the respective absentee vote results for Democrats and Republicans. “Yet, the graphical representation of these values in many cases reveals a clear pattern, even to a casual observer.”

“That the same type of pattern is seen across such a wide variety of locations is truly remarkable,” he continued. “Algorithmic manipulation of absentee votes remains a plausible explanation.”

Davis mentioned that he is not aware of any of these findings having been seen in court. “Although the snake graphs clearly represent a statistical anomaly worthy of further investigation,” they didn’t garner much traction in the frenzied weeks following the election,” he said.

“Many people dismissed them out of hand because the blue line riding above the red line is consistent with the narrative, ‘Dems pushed absentee voting; Reps encouraged in-person voting,’” he added. “And, while this may be true, the fact that the two lines follow the same contour — revealing a statistical correlation — got overlooked,” Davis said.

In the Michigan report, Briggs and Davis called for a hand recount or forensic audit in the impacted counties. Michigan, like many states identified in election fraud complaints, has yet to conduct a full recount or audit of 2020 votes.

Among the counties flagged by Droz’s team was Pennsylvania’s Allegheny County, which encompasses the city of Pittsburgh and has been at the center of numerous election integrity lawsuits. Allegheny, a stronghold for Democrats, helped push Biden over the top in the Keystone State last year, with over 50,000 apparently new Democratic voters.

An affidavit signed in December by Davis and other statisticians that was provided to LifeSite attests to the same pattern as in Ingham. The declaration points to an anomalous “40-50% advantage almost uniformly above the Republican absentee vote percentage” for Democrats in the county.

Moreover, the experts flagged Allegheny not only for suspicious vote totals, but also for correlated time data of absentee vote tabulation across hundreds of precincts. A Pennsylvania election analysis organized by John Droz reported that increases in the amounts of votes gained by each candidate showed “bizarre” conformity during Allegheny’s vote counting process.

“While there are many timestamps, any selection of those timestamps — whether using many or a few — show perfect lockstep updates,” the report reads. “This holds perfectly true for all three candidates, with no timestamp breaking the mold.”

“The results of the Allegheny time-series incremental absentee votes defy reality in a perfectly synchronous fashion — with all 1,300 precincts and candidates marching perfectly in time toward their eventual total of 340,000 absentee votes,” it continues.

“Looking at the percent share of each candidate per timestamp the ratio nearly perfectly fixed all throughout November 4th and 5th,” the report adds. “The % gain starts deviating slightly by November 7th, but not much.”

“Checking if this is some kind of bizarre anomaly only at an aggregate level, we checked into the precinct level data,” it reads, noting that “one would not expect [Allegheny precincts] to update at roughly the same rate as each other.”

However, “sure enough, they do track with each other,” the report found.

“Precincts 1-254 are shown each marching toward their eventual 100% take of absentees, with very few leaving the pack to complete early or start late,” according to the analysis. “Other graphs have some variance, but the overall picture is consistent across time and candidate.”

Droz’s team analyzed data from Edison, a research firm that provides exit-polling data to major news outlets, and compared the information to public datasets, according to the December affidavit. Courts may not have seen these findings either, a source close to the Droz team told LifeSite.

Lack of judicial interest in evidence brought by Republicans in the aftermath of the election hasn’t been unusual, as Droz and his associates also have said. According to a list of over 80 court decisions put together by the group, only 27% of election lawsuits filed by Republicans and other groups were fully adjudicated on merits.

The list includes decisions like one by the Wisconsin Supreme Court that dismissed a Trump campaign lawsuit though the court did not hear the case. Several other courts rejected suits on the grounds that Republicans or the president lacked legal standing or failed on other technical counts, while other judges determined the opposite, some ultimately ruling in favor of Trump or the GOP.

“At this point we’re all tired of the dishonest assertion that there was no 2020 Presidential vote fraud, malfeasance or other irregularities/illegalities, supposedly because ‘the courts dismissed those claims as unfounded, wildly exaggerated, etc.,’” Droz said to LifeSite. “[T]hat is simply not true,” he said.