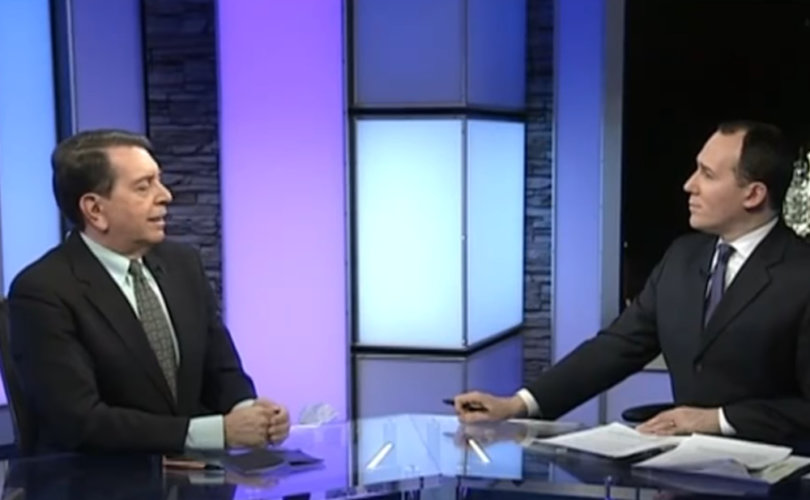 Robert Royal of The Catholic Thing and EWTN's Raymond Arroyo

April 28, 2017 (LifeSiteNews) – An April 20 EWTN panel discussed a host of hot-button issues within the Church, including the appointment of a pro-gay Jesuit priest as a Vatican consultant, how the possibility of women deacons is “certainly something to be concerned about,” and Cardinal Robert Sarah's “prophetic warning about the nature of the Church’s present crisis of faith.”

EWTN's Raymond Arroyo, Robert Royal of The Catholic Thing, and canon lawyer Father Gerald Murray (the “papal posse”) also discussed the pope's interference in the Order of Malta, how reception of Holy Communion in the hand has caused “lack of faith in the Real Presence of Christ,” and another Jesuit priest's suggestion that Jesus' words on divorce were not meant to be taken literally.

Arroyo began by asking Royal and Murray for their take on remarks Cardinal Christoph Schönborn made about the female deaconate.

Arroyo noted, “Then during the Pope’s Easter vigil homily, His Holiness had this to say about God setting the rules: ‘When the high priest and the religious leaders, in collusion with the Romans, believed that they could calculate everything, that the final word had been spoken and that it was up to them to apply it, God suddenly breaks in, upsets all the rules, and offers new possibilities. God once more comes to meet us, to create and to consolidate a new age, the age of mercy.’”

“This came after a reflection on the faithfulness of women in the Church,” said Arroyo. “What are you hearing in Pope Francis’ words and in Cardinal Schönborn's suggestions? Is this perhaps paving the way for changes in the Church on the question of women deacons, married priests?”

“It’s certainly something to be concerned about because Cardinal Schönborn is a very close associate of Pope Francis,” said Murray. He said the cardinal's words were an “ideological take on Revelation.”

“Jesus did not choose any women to be priests and the apostles did not choose any women to be deacons,” explained Murray. “Now we had deaconesses in the history of the Church and they still exist in Orthodoxy – deaconesses are not women deacons. They were not ordained to carry the deaconate functions which in the Catholic Church are part of the Sacrament of Holy Orders.”

This is because “when a deacon acts, he acts as someone who’s ordained to Holy Orders,” he said. “It would be a very, very serious matter if women were proposed for ordination as deacons, and I hope and pray that it doesn’t come to that because it would be very, very serious.”

Pope Francis “tends to suggest that rules in and of themselves are somehow oppressive as if, say, the rule of law [and] the rule of canon law … are not facilitators but they are actually oppressive of people per se,” said Royal. “Maybe he’s attempting to be prophetic – you could put it in a positive sense – and I think that is one side of his papacy. But there’s another side of it which almost suggests something anarchic – that all rules are somehow an imposition on human liberty.”

Given this and “other fears we’ve had of what’s been developing in the Vatican, it wouldn’t be improper to worry that this might be the beginning of something much larger,” said Royal.

Royal praised the “very, very strong language” Sarah used in a recent address on liturgy and the crisis of faith within the Catholic Church.

“I hear from a lot of different people of various orientations in the Church that they find that the liturgy is flat,” said Royal, which is part of the problem.

Royal said there's a connection between the push to give Communion to the divorced and remarried without an annulment and the widespread practice of receiving it in the hand.

Bishop Robert Morlino of the Diocese of Madison's recent call for the faithful to receive Holy Communion kneeling and on the tongue, as was done in Catholic Churches until the last half-century or so, is “great,” said Murray.

Communion in the hand “has not promoted a deeper faith in the Real Presence,” said Murray. “It’s promoted casualness, forgetfulness.”

The Catholic Church teaches that the Eucharist is the literal body, blood, soul, and divinity of Jesus Christ. Even one tiny crumb or particle of it is still completely Jesus, meaning the sacrament faces much greater risk if it's received in the hand rather than on the tongue.

Morlino has realized “the need to confront a real serious problem, which is lack of faith in the Real Presence of Christ because of the casual way in which the Holy Eucharist has been distributed and received,” said Murray.

“Fr. Reese also says in the article that Jesus gave this as a feminist teaching, and that who knows if he would still say the same thing because women’s rights have progressed now,” said Murray. “There’s a lot of silliness going on in the world; this is an example of it.”

The reason Catholics know that this teaching is in fact literal, Murray said, is because “we don’t believe in private interpretation of Scripture … the Church is the one who tells us, and the Church has told us clearly: this is a fundamental bedrock teaching and it goes back to the Lord’s own creation.”

Another Jesuit priest, Father James Martin, was recently appointed as a communications consultant to the Vatican in what Royal called an “unusual” move given Martin's well-known progressive views, especially on the issue of homosexuality.

“Fr. Martin recently said that he’s in favor of transgender bathrooms and that he thinks that that’s a right,” said Murray. “For me, that indicates a profound lack in his appreciation of Christian anthropology, of modesty, of the respect that we have for the rights of people of privacy in matters relating to their body. I think it indicates a profound misunderstanding of what the Church teaches about male and female.”

Furthermore, “[regarding] same-sex marriage and the like, Fr. Martin has never, as far as I can tell, been in support of Courage, and institutions in the Church trying to promote chastity and heroic fidelity to Christ’s Gospel,” continued Murray. “He always seems to be saying that homosexuality is something that is objectively from God and we have to respect it, and my answer is no, homosexuality is not God’s intent for any human being. It’s a disorder. It’s intrinsically disordered according to the Catechism.”

This teaching gives people “liberating truth,” said Murray. But Martin “doesn’t go that route … I’m disappointed that the Vatican would not put all these factors into consideration before naming him because for me, it’s disqualifying. If a priest says that men should be able to use women’s rooms if they want to, that’s not the kind of advice I think should be given by a priest.”

Arroyo said the Pope's interference with the Order of Malta doesn’t seem to show “due regard for the freedom of the members.”

The Order of Malta “is a sovereign entity,” he noted.

Murray said the Vatican asking its former leader, who the Pope personally asked to resign, to stay away from Rome during his successor's election is “puzzling.” (The Vatican recently reversed this request. The election will be held April 29.)

The Order of Malta's former leader was asked to resign after overseeing the sacking of a high-ranking official for distributing contraception in the developing world through the order's charity. Pope Francis reinstated the condom promoter after taking over the order.