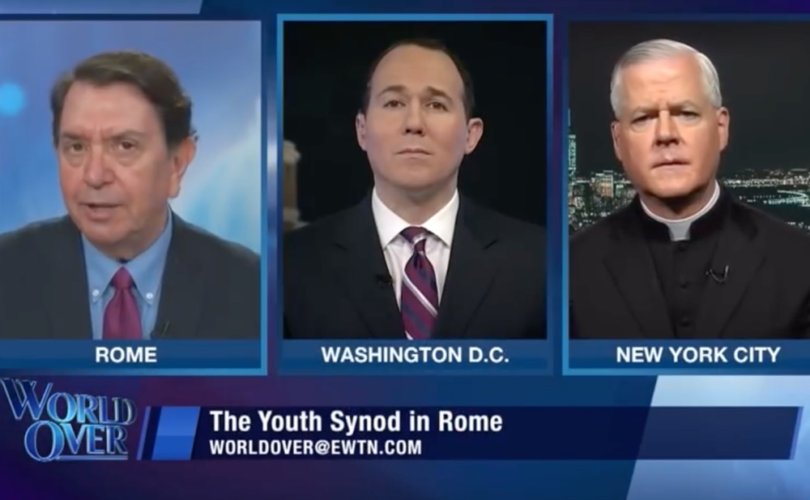 WASHINGTON, D.C., November 1, 2018 (LifeSiteNews) – The U.S. Church has a serious problem with negligent bishops in the clergy sex abuse crisis, and Pope Francis must act, noted Catholic commentators said on the Oct. 25 broadcast of EWTN’s World Over program.

Canon lawyer and priest for the Archdiocese of New York Father Gerald Murray said in the discussion that homosexuality is very much a factor in the sexual abuse crisis, and Editor-in-chief of The Catholic Thing Robert Royal said both the pope’s legacy and the Church’s credibility hang in the balance with Francis’s response to the scandal.

Host Raymond Arroyo questioned in the waning days of the Youth Synod why so little attention had been given to the story of Archbishop Carlo Maria Viganò’s third testimony dispelling and answering back the open letter to him from Cardinal Marc Ouellet, Prefect of the Congregation for Bishops.

“I think that Archbishop Viganò responding to Cardinal Ouellet has said very eloquently what’s at stake here,” Murray told Arroyo, and said that Viganò’s testimony may have been lost in the news on the Synod and other things.

“We have a serious problem in the United States with negligence by bishops concerning priests who committed sexual abuse,” Murray said.

He went on to detail the significance of the McCarrick situation as related to how the Church hierarchy has responded to it.

Why hasn’t McCarrick been removed from the priesthood?

“We’re now at the end of October,” Murray stated. “Why hasn’t Cardinal McCarrick’s trial happened? Why hasn’t he been removed from the priesthood?”

“He wasn’t simply negligent about what other people did,” said Murray. “He’s the one causing the harm.”

“He was then accused by a second person of having abused him since he was 11 years old,” Father Murray added. “The Holy See’s reaction cannot be slow and simply issuing apologies. Victims have been coming forward based on the Pennsylvania matter, now other probes are happening. The Holy See has to act.”

This must include a tribunal set up so that the Church investigates Her own crimes, he said, and doesn’t leave it up to the secular authorities to do it.

“It’s a mess, it needs to be cleaned up, and I’m glad the pope’s doing it in Chile, he just removed two bishops who committed sexual abuse,” said Murray. “Let’s start doing it here.”

They still don’t get it

Viganò followed his explosive initial testimony with subsequent statements on the pope’s silence in the matter and explaining his breaking the promise of pontifical secrecy to expose the cover-up. In his second testimony, Viganò had appealed to Ouellet to release key documents in the matter and “bear witness to the truth.”

Ouellet had responded to Viganò in an open letter, saying in part that Viganò’s testimony was ‘political’ and ‘extremely reprehensible.’

While the initial testimony is said to have rocked the Roman curia, Viganò’s third testimony was considered by some to be the most significant for various reasons.

The panel talked about whether there was ample discussion of the abuse crisis at the Youth Synod, and Royal posed that the Vatican listens too much to European, and especially Italian media, which doesn’t seem to be as outraged about priestly abuse as in the U.S.

“They still don’t get, they still don’t understand that the United States is a different kind of culture,” he said, “that for us this is almost a defining moment for the Church and for this papacy.”

You cannot just allow secular authorities to pursue people who committed crimes and think that solves the problem, Royal said.

Will Church act and show itself to have moral credibility?

“The Church itself has to show itself capable of recognizing and acting, not just on people who are abusers, but also on bishops,” he said, “whether they abused themselves or whether they covered up or they looked the other way.”

“This is a serious problem defining whether the Church is going to have moral credibility,” said Royal. “One of the reasons why it’s come up again and again (at the Synod) with the young people, is they tell the bishops, that unless this issue is dealt with, openly and effectively, it’s going to damage your credibility with our age cohort.”

Arroyo displayed a passage from Viganò’s third testimony in which Viganò identified the root cause of much of the sexual abuse as homosexuality. He asked his guests whether this message had been received in Rome, or simply dismissed as a political move against the pope.

Murray pointed out that in his August 5 letter to the Chilean hierarchy praising the bishops for having reflected on their earlier failures to address abuse, Francis did identify homosexual priests in seminaries preying on seminarians.

So the pope is aware, he said, and taking action in Chile. But the real issue, he said is an overall acceptance of homosexual acts.

'This is a problem'

“Look, the problem here gets down to this,” Murray stated, “people are overly sympathetic to the point of view of saying if someone has a homosexual desire and acts on it, we shouldn’t get too upset about it. We should just basically say well don’t do it anymore, and then that’s all.”

“And the way the Church has traditionally taught this,” he continued, “is, yes, we feel sorry for people who have disordered affections, but we do not entrust them with authority over other people, we don’t put them in situations where they’re going to repeat offend.”

“Everyone’s saying, well we have to normalize homosexuality in the life of the Church – that’s on the other side, I would say,” Murray said. “And our answer is, look, normality is what we want to have.”

“We want to help people who have a homosexual problem in their life, but we can’t just pretend it’s not at the root of why all of these victims have been victimized over the years, primarily teenage boys by male clerics,” said Murray. “This is a problem.”

Arroyo pointed out that the pope has yet to answer the charges in Viganò’s testimonies. He asked Royal if Francis can continue to remain silent and can he stonewall as he did with the dubia.

Royal said he thought in a way the Ouellet letter was concocted to be a kind of a response to Viganò.

“But it’s very clear; no one has really stepped forward and rebutted the charges that he makes,” stated Royal.

“They talk about the way he went about it, or did the pope, this or that, was it a sanction, was it a private letter,” he said. “These are all secondary issues.”

“The main factor here is that we know that people in the Vatican going back 15-20 years knew very well that McCarrick was damaged goods,” said Royal, “and yet somehow he moved up the food chain and became cardinal archbishop of Washington.”

He recounted how the scenario played out; McCarrick retired and the offenses he’d committed earlier could be quietly used to keep him in check, he receives a letter from Pope Benedict XVI telling him that he should live a life of prayer and penitence, he’s not to appear in public or have public liturgies, etc.

“But somehow when Francis is elected, he comes back from the dead,” said Royal. “These things cannot be ignored – they can be ignored, but there’s a price to pay for this.”

Viganò’s testimonies have not been refuted

“And enough of this is now known that has not been refuted, there’s nothing in the Ouellet letter that changes those basic facts,” he said. “This may very well be a defining moment for the papacy, whatever else Pope Francis does.”

Arroyo wrapped up the segment noting that McCarrick was not the only cardinal or bishop who rose in the ranks and had a record of this sort and people knew of it.

“This is just the one instance that Viganò is pointing out where he informed the pope in this case and other officials at the Vatican, and literally nothing was done.”