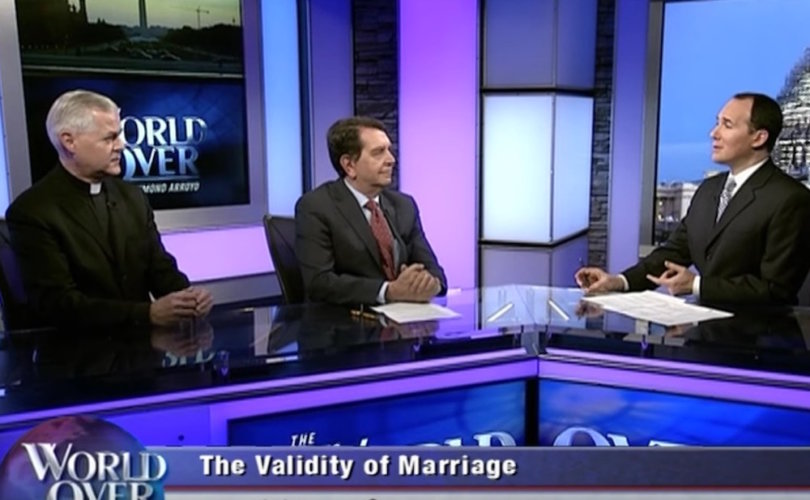 Arroyo’s thoughtful questions prompted Murray and Royal to offer their takes on Pope Francis’s recent claim that the “great majority” of Christian marriages are invalid yet some cohabitating couples show “fidelity” and are in “real marriages.” Murray and Royal reiterated their respect for Pope Francis and his office, but spoke plainly about what they perceive as his “reckless” and errant words.

Arroyo began by pointing out that Pope Francis’s claim that the “great majority” of Christian marriages are invalid “is at odds with the traditional Church teaching on marriage and the nature of that commitment involved.”

“Yes, the great majority of Catholic marriages are not null, they’re valid,” said Murray. “For the pope to say that is to express, I think, an unacceptable opinion. I regret he did it, because it causes uncertainty among people now: is my marriage valid? The pope is not following the canonical precision that’s present in the law about what it takes to get married. In order to be married validly, you simply have to know that this is a relationship between a man and a woman in view of having children and by nature, it’s a permanent relationship.”

The pope’s remarks were a “departure from tradition,” Royal said, and send “a paradoxical message that, you know, if you’re not happy, you see somebody else that you’re interested in, there’s a way out for this.”

“I think a line was kind of crossed here,” continued Royal. “Edward Peters, the great American canon lawyer, said that it’s preposterous to put forward that the vast majority, or even a large number of marriages are null because the culture is bad.”

Royal pointed out that early Christians were able to marry and live “a Christian life in a very paganized, masculine-dominated culture.”

“The early Christians were in a culture that was pretty sexually saturated and marriage was, was sort of a light thing,” he said.

Pope’s comments are a ‘landmine that exploded’

“I don’t agree with the pope,” said Murray. “I think most people are naturally capable of marriage…and the fact that you are 18 years old doesn’t per se mean you’re immature as regards being able to marry…what you need to know to get married is very simple. Boy, girl, ring, vows, and you consummate the marriage—you’re married.”

Royal said he thought it was a good thing that the Vatican seemed to retract the pope’s remarks in their official transcript because it meant “somewhere in the Vatican,” someone realized that “this caused a firestorm around the world.”

The Vatican partially walked back what Pope Francis said because “they understood this was a landmine that exploded,” Murray suggested.

‘Once you start to go down this road, there’s no guardrail’

Royal said it in alleging that cohabitation can be real marriage, Pope Francis is treading “on very dangerous ground.”

“For the pope to say that [cohabitation is] a real marriage—anything before they get married in the Church—it’s just not accurate,” Murray added. “If you’re not married, you’re not getting the grace of the Sacrament, and you’re not in a real marriage.”

“Pastoral charity demands truth,” Murray continued. “If you tell everybody in the world, ‘look, a lot of people cohabiting are in real marriages,’ that’s not something good.”

As part of his justification for the claim that cohabitation can be “real marriage,” Pope Francis said that he’d seen “a lot of fidelity in those cohabitations.”

“If you haven’t given the vows before God, then there is no vow to be faithful to,” responded Murray. “A vow made before a civil official is subject to the laws of the state, which permit divorce, so it’s not—it’s not a conditionless vow as it is in the Church.”

“[Pope Francis] says at one point that priests shouldn’t stick their noses into the moral lives of people,” said Royal.  He continued:

…this is virtually to say that the Church cannot counsel people about what they’re—they’re to do in their moral lives. I hear from people very strange reactions like this. Why do we stop then with marriage? Why is that the only Sacrament the culture has rendered invalid? Why not ordination to the priesthood? You know—are Confessions invalid? Are Communions invalid…?  Once you start to go down this road, there’s no guardrail. I mean, we understand that the pope is trying to be welcoming and he’s trying to open the doors as wide as he possibly can, but there’s a danger in this direction, that in opening the doors, you lose the substance of what the faith is there to teach.

Arroyo also pointed out that in the same address, Pope Francis jokingly asked the audience to not “tell Cardinal Müller on me.” Cardinal Gerhard Müller is the Prefect for the Congregation of the Doctrine of Faith, the Church’s doctrinal watchdog.

Another papal remark that has recently caused many veteran Vatican observers dismay is Pope Francis’s labeling of some priests as “animals” for refusing to baptize children conceived out of wedlock.

Canon law allows for children whose parents are not married to be baptized provided they will be raised according to the teachings of the Catholic faith.

“I’m a priest, I make mistakes,” Murray responded. “I wouldn’t wanna be called an animal if I make a mistake…I think he let his temper get him there, and that’s unfortunate … because people pay attention” to what the pope says.

Murray and Royal both stressed that as the leader of the Catholic Church, the world closely watches what Pope Francis says, and his words carry weight and influence.

“For a pope to speak, seemingly, to demote marriage as it exists and to elevate cohabitation as it exists, and, and on and on, this sends out shockwaves that are just incalculable,” said Royal.

“The pope, in his charity, is trying to steer people in some directions,” concluded Murray. “I disagree with some of his analysis, obviously, but we should never give people the false notion that, number one, sin is good, or number two, the sacraments are ineffectual because we live in a troubled culture. And number three, we should always say what is true yesterday is true today and tomorrow. We can’t change the Church’s teaching.”