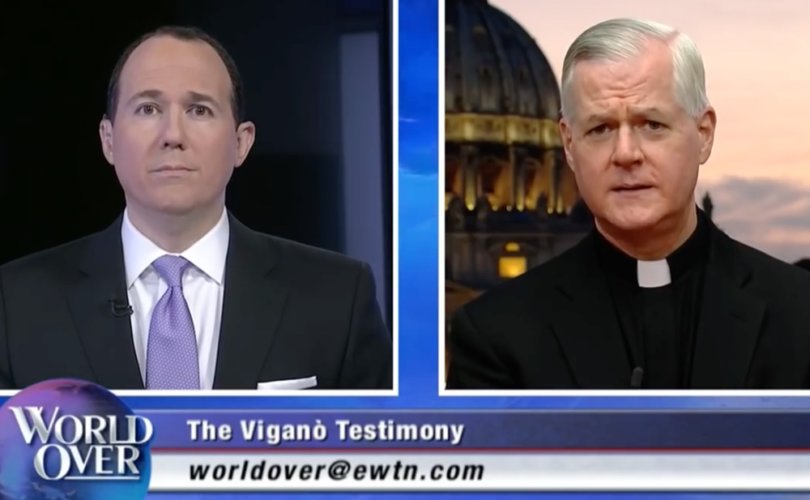 WASHINGTON, DC, August 31, 2018, (LifeSiteNews) – A sober discussion about the implications of the explosive testimony of Archbishop Carlo Maria Viganò — the first Vatican official to charge the Pope and others with covering up sex abuse in the Church —elicited one stunning statement after another from members of EWTN’s Papal Posse.

“This is surely one of the most traumatic and critical moments in the Catholic Church since the resignation of Pope Benedict XVI,” began The World Over host Raymond Arroyo, referring to Viganò’s allegations of pervasive sexual corruption in the Church, calling out clerics by name, including Pope Francis.

“This is very big,” said canon lawyer Fr. Gerald Murray.  “This is something that is unprecedented in our lifetime, and it is, for me, a crucial moment in the life of the Church.”

“We have a starting point now to deal with what has to be considered the greatest crisis of the Church at this moment,” said Robert Royal.

Fr. Murray said that Viganò’s letter calls into question everything that the Vatican and the American bishops have been doing since 2002 to rid the priesthood of clerical sexual abuse and the stigma it has cast upon the Church.

“Are we going to indeed root out sexual abuse in the life of the Church,” wondered Murray.  “Will the abuse of authority be exposed and punished?”

“I have high regard for Archbishop Viganò,” added Murray.  “This is a man who lives the Gospel because he speaks the truth.”

Did Pope Francis rehabilitate McCarrick, despite his long history of sexual abuse?

The posse zeroed in on a key passage in the Viganò testimony, representing the heart of  his accusation against the Pope:

Immediately after, the Pope asked me in a deceitful way: “What is Cardinal McCarrick like?”  I answered him with complete frankness and, if you want, with great naiveté: “Holy Father, I don’t know if you know Cardinal McCarrick, but if you ask the Congregation for Bishops there is a dossier this thick about him. He corrupted generations of seminarians and priests and Pope Benedict ordered him to withdraw to a life of prayer and penance.” . . .

Pope Francis appears to have subsequently overruled Pope Benedict’s penalties on McCarrick, because the former cardinal “continued to defy those sanctions” and received “even more responsibility from Pope Francis.

“McCarrick was known to flout authority,” according to Arroyo.

When Cardinal Ratzinger [now Pope emeritus Benedict], in 2005 entrusted McCarrick with a directive to American bishops denying communion to pro-choice politicians, McCarrick pocketed the letter rather than delivering its important message to his fellow bishops.

“When ordained a priest, the first child he baptized, he later committed sexual abuse against that boy,” noted Murray.  “He abused a seminarian at St. Patrick’s Cathedral in the sacristy; He lied to the American bishops about the letter from Cardinal Ratzinger and said the exact opposite of what the letter said.”

“The hard facts we know after 2013 are these,” said Robert Royal, “that somehow McCarrick began to play a role in this papacy.”

“It seems very clear he played a role in getting … Cardinal Cupich appointed in Chicago and Cardinal Tobin appointed in Newark because of some influence somewhere,” said Robert Royal.

Royal also pointed out that three years after Viganò claims he informed Pope Francis about McCarrick, the Pope sent McCarrick as an envoy to negotiate with China.

McCarrick was also “instrumental in the election of Jorge Bergoglio as Pope, noted Arroyo, suggesting that McCarrick lobbied for his friend, then an Argentine Cardinal, sensing this might provide a path to release from the sanctions that Pope Benedict had imposed on him.

Homosexual networks embedded in the Church and carnage left behind

A quote pulled from Archbishop Viganò’s testimony provided the basis for a discussion about how church resources, gleaned through the sacrificial contributions of the lay faithful, have been diverted to cover up the sexual abuses of priests and prelates.

Corruption in the misuse of the Church’s resources and of the offerings of the faithful must be fought against. The seriousness of homosexual behavior must be denounced. The homosexual networks present in the Church must be eradicated … These homosexual networks, which are now widespread in many dioceses, seminaries, religious orders, etc., act under the concealment of secrecy and lies with the power of octopus tentacles, and strangle innocent victims and priestly vocations, and are strangling the entire Church.

Far more significant than the financial ruin inflicted on the Church by priests who cast off their vow of celibacy, are the victims of their sexual abuse, the “carnage left behind.”

“There is justice due here, and you can’t just let these [clerics] go on because they’re wearing red or magenta,” said Arroyo.

By his recent refusal to address the accusations in Archbishop Viganò’s testimony, Pope Francis has perhaps indicted himself, because, “Silence is cover up,” said Fr. Murray.

“Is it likely a man who is innocent of serious charges would say nothing?” he added

“Many Catholics were heartbroken by this answer because they were looking for clarity from the Pope,” observed Arroyo.

“It seems to my eye, what [the Pope] did, wittingly or unwittingly, is unleash the media hordes on Viganò, saying, ‘you go look at him,’” continued Arroyo.

“And now what I see on social media and in public events, Catholics are upon Catholics, bishops are opposed to bishops,” he added, “ It’s created this acrimony and craziness,” that might have been avoided if Pope Francis were willing to answer Viganò.

When Chicago’s Cardinal Blase Cupich dismissed Viganò’s revelations about prelates covering up homosexual abuse as a ‘rabbit hole,’ Arroyo said, “This took my breath away.”

“Abused young men and boys in seminaries, corruption on multi-levels in the clergy, and their enablers, that’s a ‘rabbit hole?’” asked an incredulous Arroyo.

“When you have people within the Church itself abusing their authority and their positions, that may lead to the damage of souls forever,” said Royal, “I don’t see how you can call this a ‘rabbit hole.’”

Catholics, “will only be reassured when the Holy Father addresses the specific charges that Archbishop Viganò made, answers whether they’re true or false, and then honestly submits himself to the same kind of provisions that he would if any bishop with a similar accusation, came clean in front of him,” said Fr. Murray.

“The American people and the people of the Catholic Church throughout the world, we deserve honesty, holiness, and doctrinal fidelity,” continued Murray. “We do not deserve what Archbishop Viganò says is happening which is a culture of secrecy, and, quite frankly, immoral behavior being protected.”