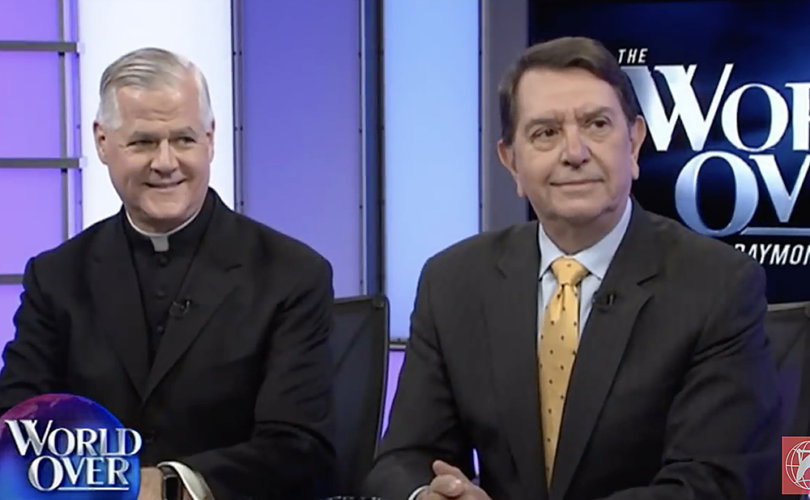 Fr. Gerald Murray and Rober Royal on The World Overvideo frame from program

WASHINGTON, D.C., June 22, 2018 (LifeSiteNews) – On Thursday’s EWTN The World Over Father Gerald Murray took apart the heterodox notion floated by some in the Church that the Lord creates people to be “gay”. He also derided the idea that God would make someone the wrong sex.

The New York priest and Canon lawyer made his comments during this week’s Papal Posse segment with the program’s host Raymond Arroyo and editor of The Catholic Thing, Robert Royal.

Arroyo had asked Murray and Royal to comment on the Vatican having included the term “LGBT” in the working document for the upcoming Youth Synod.

News of the controversial move surfaced this week – the first time the Holy See has used the term in an official document. Catholics have been expressing concern that the Vatican is further capitulating to the “gay” lobby, and not surprisingly has been lauded by the “LGBT” movement for its “gay”-affirming actions.

“This is a big problem,” Murray stated. “We do not use the political language of the gay rights and associate movement when analyzing the nature of man and the nature of sin.”

“The Catholic Church does not accept that there is a category of human being created by God meant to commit homosexual activity,” he emphatically said. “We don’t believe that bi-sexual people exist in the sense of saying God made certain people who want to have sex with both men and women.”

Without missing a beat, Father Murray continued, “We do not believe in trangenderism.”

“The Catholic Church does not teach that God made some people women but gave them a male body, and therefore they have to discover that they’re women by overcoming their male body,” he said. “We don’t believe in any of that.”

This terminology (LGBT) is propaganda, Father Murray said, and it was a mistake for the Vatican to engage in its use.

“That’s a political propaganda term,” he stated. “Using that in this document signals an agreement that all of those categories exist as natural and God-given categories of people – BIG mistake.”

One of the pope’s more recent stirs occurred when he reportedly told a victim of clerical sex abuse who identifies as homosexual that God made him “gay” and that this was okay.

Jesuit Father James Martin, editor-at-large for America magazine and Vatican communications consultant, continually conveys this same idea, and lobbies incessantly for the Church to accept “LGBT”-identifying people “as they are” – eschewing both the Church’s teaching on chastity and the fact that human beings are not identified by their sexual proclivities.

Royal also criticized the Vatican for including “LGBT” terminology in the working document for the upcoming Youth Synod.

He pointed out that he sensed modernist ideology creeping into the gathering of youth where the document was being crafted, though whether this was generated from young people or from Vatican players was not clear.

And he said the Vatican’s use of “LGBT” terminology in the document resembled the insertion of culturally accepted terms and beliefs into the documents for the Synods on the Family.

Both Synods were called to gather collegial input for Pope Francis in considering challenges faced by the Church today.

Liberal synod fathers lobbied to allow divorced and remarried Catholics and others in non-marital unions to be permitted to receive Holy Communions before and during the Synods on the family.

Despite considerable efforts by orthodox prelates and lay Catholics to ensure the Synod process respected and maintained Church teaching on marriage and the family, the process and documents were affected by the departures from Church teaching. The resulting exhortation, Amoris Laetitia, green-lighted – albeit tacitly – Communion for Catholics living in objective sin.

Arroyo noted that Vatican representatives would likely say that the “LGBT” terminology is the language of the culture and that of the young people with whom the Vatican is supposed to be talking.

He displayed on the screen the quote that the Synod’s Secretary Lorenzo Cardinal Baldisseri made at the press conference announcing release of of the Synod document when asked about the “LGBT” term finding its way into the document.

“They (young people) provided a document and we quoted it,” Baldisseri said. “This is the explanation for this.”

Arroyo said reporters have reviewed the document produced by the young people, however, and found that the term “LGBT” was not found in it.

“What’s happening?” he asked Royal who was present during the week that the 300-plus young people were there preparing the document.

“I have to say I felt somewhat ambivalent, because on the one hand, some of them were very enthusiastic and great kids,” Royal said, “and on the other hand it was clear that some kind of modern ideology was starting to seep in, perhaps induced by figures within the Vatican rather than by the students themselves.”

“Of course we know that young people are constantly confronted with the general culture, as everyone is”, Royal continued, “which inevitably is going to involve this ‘LGBT’ terminology.”

Conceding the language of the culture immediately puts the Church at a disadvantage, he said, which also took place during the Synods on the Family.

“But just as with the Synod on the Family, a lot of us looked at the preparatory documents for that as well,” he said, “and there’s this sort of B-minus sociology that goes on, where you start with the terminology and the understanding that’s out there in the culture.

“And of course it’s very difficult when you start on the other guy’s field to score on Catholicism,” Royal said. “You’re playing their game, it’s an away game that you’re playing.”

“So, I detect the same thing going on here,” he added.

There may have been good intent in using this language, he said, and it is something that does have to be confronted, however the outcome is not going to be good.

Royal stated, “To start using the language of the culture does not bode well for what the consequences will be.”