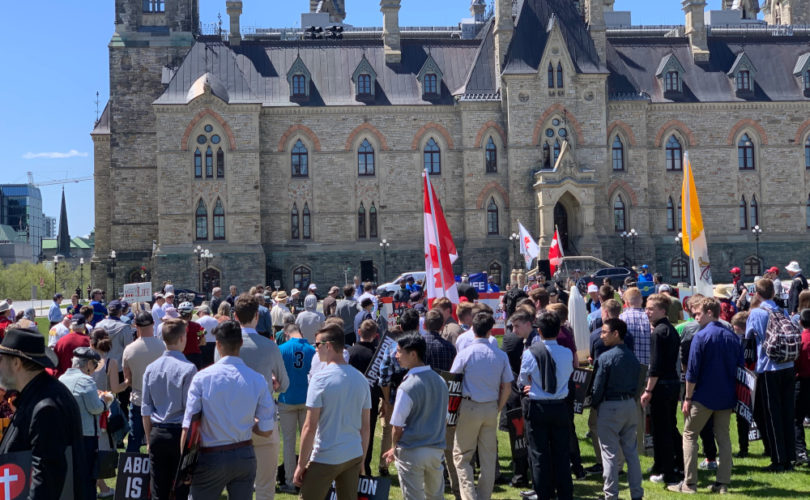 OTTAWA, Ontario, May 18, 2021 (LifeSiteNews) – EWTN, the Eternal Word Television Network, plans to air replays from the 2021 National March for Life in addition to streaming the panel discussion from the Virtual Rose Dinner.

On Thursday, EWTN will broadcast their March for Life Special, with footage from the Rally on Parliament Hill and the march through the streets of Ottawa, beginning at 2 p.m. and then later re-airing at 10 p.m. EDT that day.

On May 13, hundreds of Canadians gathered on Parliament Hill in Ottawa to protest the murder of innocent life. While most mainstream media outlets failed to report the gathering, LifeSite published videos and pictures of the event.

At Parliament, LifeSite’s John-Henry Westen interviewed many pro-life activists. Jennifer Sloan, wife of outspokenly pro-life Canadian MP Derek Sloan, told LifeSiteNews that she was “incredibly proud” of her husband for standing up for life.

“He stands for what he believes in. And he’s right,” she said. “He’s right on everything that he’s stood up for. And I’m very thankful for that.”

At the March, Jeff Gunnarson, president of National March for Life organizers Campaign Life Coalition, explained in an interview with LifeSiteNews that Canada needs “politicians who are not just pro-life, but they actually have to believe in passing legislation. And the way you pass it is by asking. So we need pro-life MPs to ask to end abortion, to bring bills to end abortion.”

Canadian author Kennedy Hall told LifeSiteNews, “It’s a sad time in Canada. It really is. We do have a very anti-life country.”

“However, in a weird way, because our country is sort of depressed, there’s also a lot of fertile ground for hopeful messages,” he added.

LifeSite’s Kenton Biffert asked Canadians at the March for Life what message they would send to pro-abortion Prime Minister Justin Trudeau. Participants responded by urging Trudeau to stop the murder of innocent babies. A priest implored Trudeau to “repent and believe in the Gospel.”