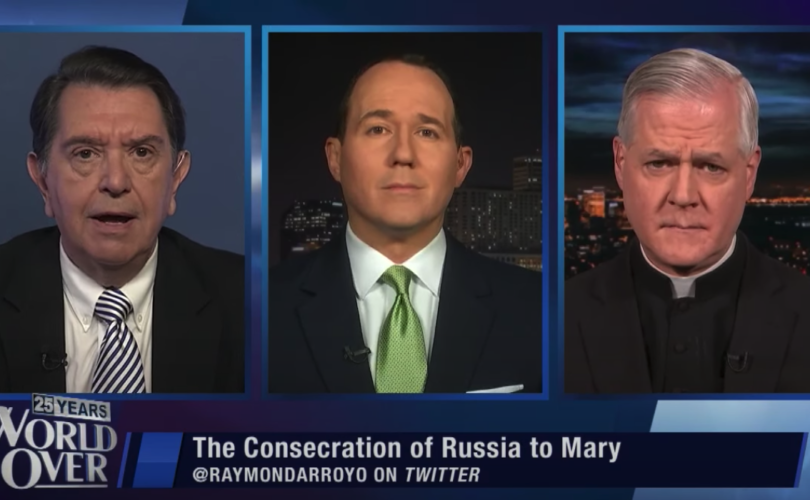 (LifeSiteNews) — On EWTN’s “The World Over” Thursday, Fr. Gerald Murray, a canon lawyer and regular EWTN contributor, credited Pope Francis with damaging the mission of the Catholic Church, citing his sudden removal of a Puerto Rican bishop and inaction against the dissident German “Synodal Path.”

“An honest and thorough look at the life of the church today has to say, have the actions of Pope Francis contributed to the mission of the Church flourishing or being damaged?” Fr. Murray said during the show’s “Papal Posse” segment.

“And in certain areas there’s a lot of damage,” he added, pointing to the Latin Mass, which the Pope dramatically restricted last year, and his 2016 apostolic exhortation Amoris Laetitia. “You can go down the list.”

Fr. Murray especially criticized what he described as the “unjust removal” of Puerto Rican Bishop Daniel Fernández Torres, who was “relieved” as the head of the Diocese of Arecibo earlier this month without explanation or canonical proceedings.

“And then on the level of just management, this arbitrary removal of the Bishop of Arecibo, Puerto Rico is a symbol of unfortunately how the pontificate is sort of drifting in the direction of ‘agree with us or we’re going to slap you down.’ That is not Christianity,” Fr. Murray said.

Bishop Fernández Torres, a staunch defender of Catholic teaching, announced in a statement that he was being forced out of his diocese over allegations of disobedience to the Pope and lack of communion with fellow Puerto Rican bishops. His dismissal came after he declined to sign a letter issued by the Puerto Rican episcopal conference last year announcing segregation at Mass based on jab status. The Arecibo bishop had released a separate statement stressing that Catholics can indeed turn down the shots in good conscience.

The archbishop of San Juan has since confirmed that Bishop Fernández Torres was ousted over allegations of “insubordination to the Pope,” which reportedly centered on his defense of conscience objections to COVID-19 jabs.

“I think the Holy Father’s made a tremendous error here in removing a bishop, treating him essentially as a, you know, branch manager, who can be lifted out without cause,” Fr. Murray commented, “because the bishops are the Successors of the Apostles, and if they don’t commit canonical crimes or are otherwise, you know, unable to carry out their function, they should be left in office and supported.”

During the segment, Robert Royal, editor-in-chief of The Catholic Thing, also took aim at the dismissal of Bishop Fernández Torres, which he contrasted with the Pope’s refusal to sanction European bishops who have publicly rejected immutable Church teaching against homosexuality in recent weeks.

Royal singled out Cardinal Jean-Claude Hollerich of Luxembourg, whom Pope Francis has tapped to lead the Synod on Synodality, and Bishop Georg Bätzing, president of the German bishops’ conference. Australian Cardinal George Pell urged the Vatican in a letter last week to censure the two prelates for their open support of homosexual activity.

The Congregation for the Doctrine of the Faith “has to come forth and criticize both Cardinal Hollerich and Bishop Bätzing for preaching heresy, outright heresy, that’s been, I mean absolutely, clearly defined,” Royal said.

“And they do it on these utterly preposterous grounds,” he observed. Hollerich, for example, told reporters last month that the Church’s millennia-old condemnation of homosexual acts is “false,” because “the sociological-scientific foundation of this teaching is no longer correct.”

“And for a cardinal of the Roman Catholic Church who is about to be the head of the upcoming Synod on Synodality to say that science has disproved Catholic doctrine, it’s preposterous,” Royal said.

Bishop Bätzing similarly endorsed homosexual acts in a recent interview, echoing the position of the German Church’s “Synodal Path,” which backed a proposal in February saying that the Vatican should declare sodomy no longer sinful.

Pope Francis’ leniency toward Cardinal Hollerich and heterodox German bishops, compared with his approach to Bishop Fernández Torres, shows an “incoherence at the heart of this sort of thing,” Royal said. And the Vatican’s lack of transparency about the Arecibo bishop’s ousting gives the appearance of an “arbitrary exercise of power that I think damages the Church’s own credibility, its own appearance of being consistent and respectful of all opinions within the Church, both among laity and among bishops,” he added.

‘A major source of scandal’

Fr. Murray also ripped the German hierarchy for its pro-LGBT dissidence and cited the unequal treatment of the “traditional-type” Puerto Rican bishop as a “major source of scandal in the life of the Church right now.”

“It looks like if the Germans get their way, the Synod on Synodality should be renamed the synod on homosexuality, because that is basically all they talk about,” he said.

“They’re talking constantly about the Church’s teaching being wrong being hurtful, apologizing and then saying that they’re going to ‘bless’ people living together in homosexual unions,” the priest continued. “Let’s be very clear: the Catholic Church’s teaching on this is of Divine origin. It comes from the Sacred Scriptures. It is as clear as a bell and it cannot be changed.”

“And it’s very upsetting that, you know, the Bishop in Puerto Rico, who was a traditional-type bishop — he preached the doctrine, he lived the faith — he gets removed because other Puerto Rican bishops are unhappy with him, yet the bishops in Germany can contradict the tradition and doctrine of the faith, and they’re left in office,” Fr. Murray said. “This is a major source of scandal in the life of the Church right now.”

Bishop Fernández Torres has publicly defended life, family, and religious freedom at least two dozen times over the past decade, according to a recent article by Puerto Rican Catholic organization Fieles a la Verdad.

Royal’s and Fr. Murray’s comments about the current state of the Church under Pope Francis resemble those of another prominent Catholic figure, Fr. Santiago Martín.

Fr. Martín, founder of the Franciscans of Mary, a papally-approved international association, warned in a March 11 video of “deterioration” of the papacy in light of the unchecked errors of the German Church and the abrupt removal of Bishop Fernández Torres.

“Sudden dismissals not only harm the victim but also harm the institution,” Fr. Martín said about the Puerto Rican prelate’s ouster. “When law disappears in the Church — and what has happened is a serious precedent — when law disappears in the Church, there will inevitably be a deterioration of the figure not only of the sitting pope, but of the papacy.”

Papal “deterioration” “has already begun to take place” during Francis’ pontificate, Fr. Martín lamented, “and not exactly coming from conservative ranks.” He pointed to Cardinal Reinhard Marx, archbishop of Munich, who, like Bätzing and Hollerich, has recently denounced Catholic moral teaching, including on homosexuality.

Marx flouts the Church’s sexual ethics because he knows “that nothing will happen to him,” Fr. Martín said.