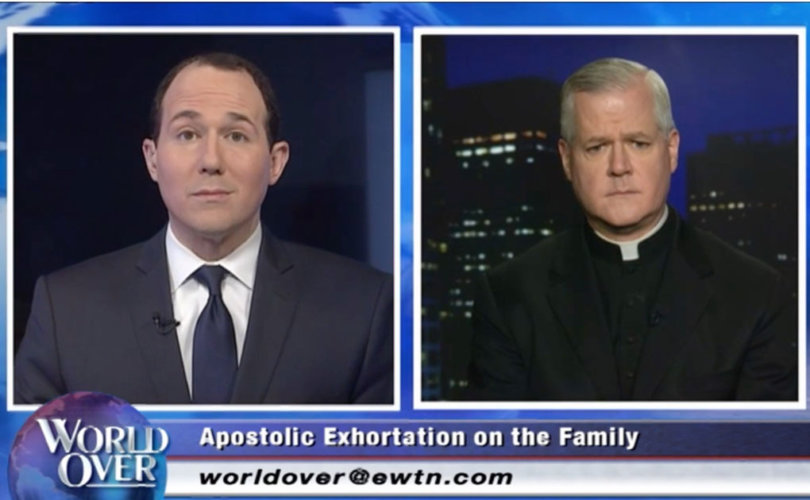 April 16, 2016 (LifeSiteNews) – On EWTN’s April 14, World Over Live program hosted by Raymond Arroyo, canon law expert Fr. Gerald Murray and Robert Royal, Catholic author and president of the “Faith and Reason Institute“, presented a frank, respectful analysis of the problematic aspects of Pope Francis’ controversial Apostolic Exhortation, Amoris Laetitia (The Joy of Love). Carefully and methodically responding to Arroyo’s probing questions, the panelists gave support for the deep concerns and alarm of many Catholics regarding particular “problematic” parts of the Exhortation.

Arroyo’s questioning touched on a number of delicate issues for the two panelists regarding Pope Francis’ Exhortation. The difficulty of the challenge to provide honest answers to Arroyo's questions regarding the head of the Catholic Church was apparent in the faces of Royal and Murray throughout the 35-minute dialogue. Fr. Murray appeared especially pained to have to explain the obvious serious flaws and real dangers for the Church in various parts of the exhortation which he indicates must be addressed and corrected by the Holy Father.

One notable part of the lengthy discussion occurs near the beginning of the dialogue. Arroyo displays the slide below containing text from Francis' Exhortation that appears to indicate the Holy Father is suggesting there can be varied theological understandings and applications of Church teaching according to local cultural realities. The EWTN host then asks Fr. Murray for his thoughts on the the quotation.

Fr. Murray responds, “I think this is a dangerous statement precisely because we're talking about the universal law of the church regarding the administration of the sacraments and to say that enculturation would mean that in Germany the sacramental discipline would be different than in neighboring Poland or in a country in Africa, that’s very disturbing.” He continues further to expand on the reasons for his great concern.

The text of the final question from Arroyo and Fr. Murray’s response to that question give a sample of the overall tension and historical importance of the 35-minute program segment:

Raymond Arroyo: What do you expect the reaction to be among canonists, among bishops and how do they register the critiques that I'm hearing and the concerns to the pope in a way that could reach him and possibly reshape or readjust this document.

Fr. Gerald Murray: This is the effort I think all of us who are concerned want to see happen, which is to tell the pope that flattery would mean we keep our mouths closed and say nothing, but gospel frankness, remember that word he used in the Synod, “parrhesia,” the gospel frankness calls upon us to say, “Holy Father either you been poorly advised or you have an incomplete conception of this issue. We know that we can share some information with you.”  But the thirteen or so Cardinals who wrote to the Pope at the beginning of the last Synod, I mean that’s the perfect kind of example I think is going to happen.

Also you know canon 220 – all the faithful have the right to express their opinions about matters in Church life.  This is good that this be debated and brought forward in the press. …St. Thomas is used in Chapter eight to justify this new approach (in the Exhortation). I can't believe that a good group of Thomists won’t be having a response to that

I don't want to criticize the pope. I think the pope is a wonderful man. I think he's a holy man in so many ways. I hope to be a good man and holy myself. I don't judge, but what I will say is when you do something in public that contradicts what your predecessor did, there has to be an accounting for it and a responsibility to upholding the gospel and I think that's what many bishops, Cardinals and priests will call for.