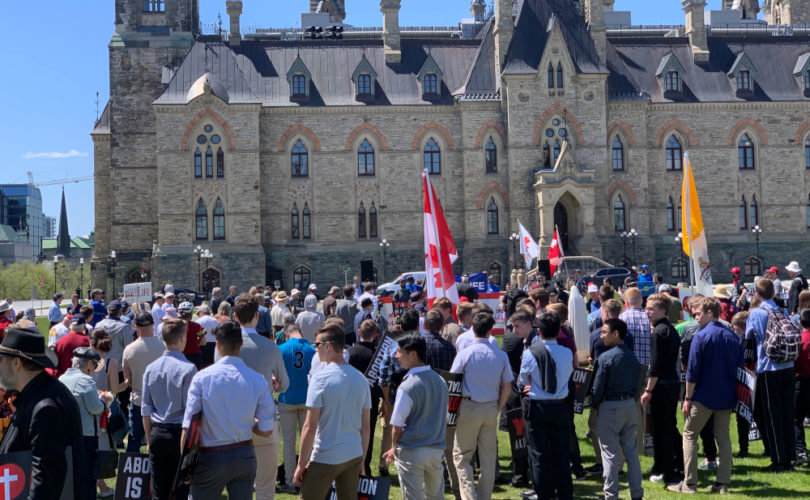 “I can’t believe it’s already been a week since the rally in Ottawa,” said Debbie Duval of Campaign Life Coalition, the group that organized the May 13 event.

“We had a pretty impressive turn out, with all things considered. The speakers were fantastic, too. I know [that] a lot of pro-lifers, though, weren’t able to make the trip and really wanted to be there. So here’s a chance for everyone to watch the entire rally and march in the nation’s capital,” she said.

EWTN was at the event last Thursday, collecting footage for an exclusive presentation that runs today.

EWTN’s March for Life Special airs this afternoon at 2 p.m. EDT here and will replay later tonight at 10 pm EDT.

“Today’s program also features interviews and highlights from the entire week, so it’s a great way to get an overview of the whole experience, all in one sitting,” Duval said.

The 2021 Canadian National March for Life went ahead this year in a hybrid format with both an in-person rally followed by a march in Ottawa on May 13 and a full program of virtual events that were held between May 9 and 16.

The theme for this year’s event was, “You are not alone.”

Duval said that there was “something really heartwarming about this year’s march,” with hundreds of people showing up to support unborn life despite restrictive COVID measures in the province.

“And I know other people felt it, too. It was prayerful. It was intimate. And you know what? It reminded me of what it means to be part of a grassroots movement, one that won’t back down from defending this simple truth — that every human life is sacred from the moment of conception until natural death,” she said.

Watch EWTN’s broadcast of the March for Life here.

LifeSite’s coverage of the 2021 National March for Life

Wife of pro-life Canadian MP: ‘He stands for what he believes in. And he’s right.’

Canadian author Kennedy Hall: ‘We do have a very anti-life country’