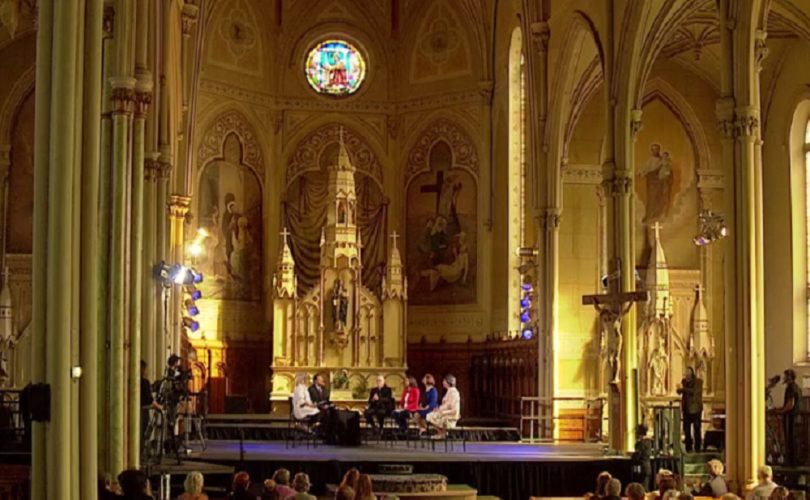 OTTAWA, October 7, 2015 (LifeSiteNews) –  In the first ever of its kind, Canada’s most distinguished champions of the pro-life movement gathered in Ottawa to discuss, on camera, the most pressing life issues facing the country, including the country’s lack of any abortion law and the Supreme Court’s recent ruling that struck down the law against assisted suicide.

Now, just days before the October 19 federal election, their candid discussion about how the battle for life fares in the country’s current political and social climate can be viewed online and via the Internet.

The Canadian Pro-Life Roundtable was originally filmed May 13 at St. Brigid's Centre for the Performing Arts in Ottawa — prior to the National March for Life — by EWTN in association with DunnMedia. It is scheduled to be broadcast this Saturday.

Hosts Jim and Joy Pinto are joined by Archbishop of Ottawa Terrance Prendergast, Brian Lilley of The Rebel, Patrick Craine of LifeSiteNews, Alissa Golob of Campaign Life Coalition, Christian Domenic Elia of Catholic Civil Rights League, Alex Schadenberg of the Euthanasia Prevention Coalition, and many others, to provide extensive commentary on life issues in Canada.

Life issues are discussed in four different panels during the 90-minute show.

Panel three, on the topic of abortion, politics, and the culture of death, discusses the current state of affairs in Canadian politics, with particular emphasis on abortion. Focus is given to the various parties’ stance on abortion with particular attention paid to the extreme abortion view of Liberal leader Justin Trudeau. Panelists include Archbishop Prendergrast, Deborah Gyapong, Patrick Craine, and Alissa Golob.

Panel four, on changing hearts and minds, discusses the need to promote and foster pro-life candidates as well as the need for Canadian pro-lifers to volunteer for and support organizations that fight for protection of every human life. Panelists include Brian Lilley, Campaign Life Coalition's Shantel Jose, Canadian Centre for Bioethical Reform's Jonathan Van Maren, and National Campus Life Network’s Rebecca Richmond.

The premiere broadcast will be aired on Saturday, October 10 at 4 PM EST on EWTN Global Catholic Network and will also be streaming online at EWTN.com under the television tab.

Repeat broadcasts will be on these dates: