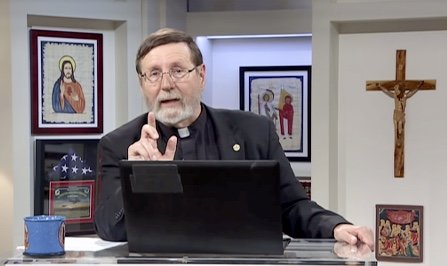 NEW YORK, November 7, 2019 (LifeSiteNews) – An American Jesuit priest and EWTN host condemned the “worship” of the Pachamama pagan statue that took place in the context of the recently concluded Amazon Synod in Rome.

Fr. Mitch Pacwa, SJ, the host of EWTN’s “Scripture and Tradition” show, blasted the use of the carved wooden figures representing the fertility goddess as a “major scandal.”

“The introduction of the Pachamama into the Synod on the Amazon is something that is a major scandal,” he said.

Last month, prior to the opening of the Amazon Synod, a pagan ceremony took place in the Vatican Gardens where people bowed down to the ground and worshiped Pachamama idols as Pope Francis and other top-ranking prelates looked on. The October 4 ritual, captured on video, shows Pope Francis blessing the pagan statue before receiving it as a gift.

Pacwa, who is familiar with Pachamama worship from his work in Peru, was not impressed by the attempts of the Vatican’s Communications team to spin the figures as mere symbols of fertility and motherhood.

“Knock it off,” he said with uncharacteristic anger. “We’re not stupid. We’re not. This is an idol.”

One fruit of syncretistic Catholic interest in Pachamama has the appearance of a prayer to the pagan goddess published by the Mission Office of the Italian Bishops’ Conference.

Pacwa went on to read part of a “prayer” to Pachamama that was published by the Mission Office of the Italian Bishops’ Conference in the leadup to the Amazon Synod: “Pachamama of these places, drink and eat as much as you like of these offerings, so that this land may be fruitful. Pachamama, good Mother, be propitious!”

“Stop,” Pacwa shouted. “You’re talking about making an offering to a goddess that the people of the Andes put higher than Jesus and his Blessed Mother.”

The priest told his audience that “Pachamama was still adored and worshipped in Peru, especially in the mountains.

“She was part of a hierarchy of deities,” Pacwa explained.

“The gods of the mountains were the chief deities. Pachamama, or Mother Earth, was under them. Below Pachamama were Jesus, the Blessed Virgin Mary, and the saints. And then the rest of us. So they had integrated Pachamama into a pseudo-Catholic view of the world.”

Pacwa stressed that there is only one God, one God in three Persons, Father, Son and Holy Spirit.

“There is no other god!” he proclaimed.

The priest said he hoped that the Conference of Italian Bishops had no idea the prayer had been published in their name.

“But there’s some apparatchik in the Mission Office who said, ‘Oh, this is kind of cool,’” Pacwa suggested. “That kind of goofy, superficial, New-Age-like thinking that goes back to the 1970s.”

“This is something that is unacceptable.”

Making it even worse, he said, was that an entrance song sung at Mass in the cathedral in Lima, Peru was a hymn to Pachamama.

The priest said he had seen the video of the young men taking the images of Pachamama out of the Church of Santa Maria in Traspontina and remarked that the church is dedicated to Our Lady of Mount Carmel. Underscoring that nobody is permitted to worship the Blessed Virgin Mary, he suggested that honoring her Divine Son through the brown scapular would be a good reparation for the sins committed regarding syncretistic worship of Pachamama.

“Here’s the choice,” Pacwa said. “Do you accept this idol, naked with the big breasts, or do you take a look at Our Lady of Mount Carmel, the mountain where the prophet Elijah destroyed the prophets of Baal and Astarte, the mother goddess of the Canaanite people?”

“Do we accept from Our Lady the scapular she offers, or do we look to Pachamama to give her sacrifices, something we may not do to the Blessed Mother! We cannot offer her sacrifices! Sacrifices are offered to God and to God alone!” he continued.

“This other nonsense has to stop. And it’s spreading.”

Wearing the brown scapular, he said, would be a way of symbolically putting on Christ and the yoke of Christ.

“That will be a start of many other things we have to do to make sure that this nonsense stops now,” he said.

In 1970 on the Feast of Corpus Christi, there was an earthquake in Peru measured at 7.9 on the Richter scale. A resulting landslide buried the city of Yungay, killing more than 20,000 people. Pacwa visited the mass graveyard when he was in Peru in 1975, and what he saw there made his studio audience gasp.

“The only thing to survive was a statue of Jesus Christ at the local cemetery,” Pacwa said.

“One of the most amazing things about this is that at the base of it … (survivors) had written, ‘Such is the fate of those who worship Pachamama instead of the true Christ.’ That was their response.”