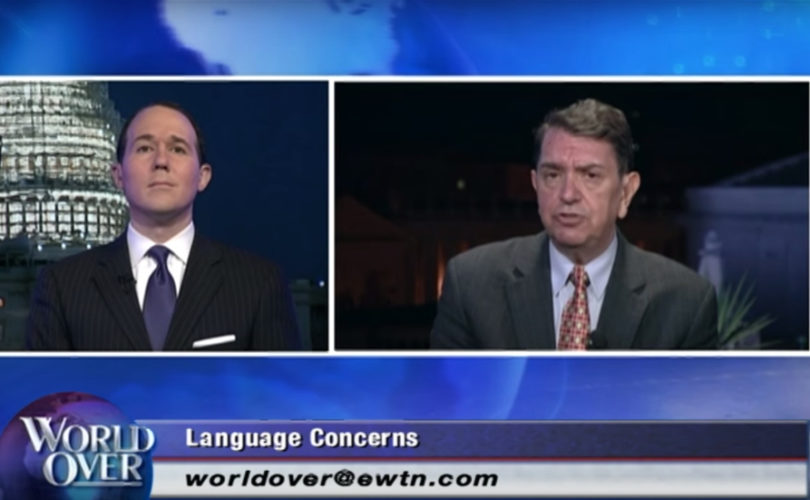 Robert Royal: “Everyone seems to be very much on edge. There is a high degree of anxiety.”

ROME, October 12, 2015 (LifeSiteNews) – The October 8 EWTN World Over program led by Raymond Arroyo, who was joined by canon lawyer and New York pastor Fr. Gerald Murray, as well as Robert Royal, editor of the TheCatholicThing.org, presented a surprisingly “honest analysis” of the tumultuous first week of the Synod on the Family.

Arroyo and his two guests expressed many concerns about the Synod process and what took place during the first week. They notably commented at length on the statements about homosexuals by Fr. Thomas Rosica that they said “seemed to come out of nowhere” and which were not mentioned by the other language Vatican press office reporters as having been discussed by the bishops.

The program began with a video clip of Cardinal Pell’s statements before the start of the Synod, during which he expressed concerns about the Synod process that he and other Synod fathers held.

Arroyo emphasized that the Synod “is merely an advisory meeting of the bishops. It is in no way binding on the pope” and therefore it is uncertain what impact all the discussions will have on the final outcome, to be determined solely by Francis.

Also shown was a clip of Archbishop Chaput stating his concern last Wednesday about “the English translation” of Synod documents, “which in some ways doesn't match the Italian which is the official version.” This addressed a deep concern among the bishops about whether they were being provided with accurate translations of what was being said during the speeches at the Synod.

Chaput said that “the language is a big issue.”

Arroyo asked his guests, “How reliable are the translations?”

Robert Royal, from his observations and discussions in Vatican City, replied,

“This nervousness about the language reflects the general nervousness here in Rome and not only the traditional Catholics in the room, but also by the progressives. Everyone seems to be very much on edge. There is a high degree of anxiety it seems to me about what exactly are the processes, the procedures that are being followed in the Synod and also the content, of course.”

Father Murray’s response was that,

“There's always the danger, that the Church in addressing a topic will engage in sociology, rather than theology. In other words describe how people are living and then try and say this is how it fits with the Christian life. Really a Synod has to be the extension of a theological reflection that the Church takes to the Gospel and her defined doctrines. That means, the life situation of the people is judged by the gospel and not the other way around. And that's where the concern is of archbishops and others about the working document.”

He continued, “The word of God must train us and guide us and prepare us to change how we live” as opposed to the expressions of the more “progressive” bishops suggesting that instead it is the Church that should change.

Arroyo observed that “the pope took to the floor” early on, “to calm the fathers” about marriage and vouched for the method and process of the Synod that many are concerned about – a move that Royal said was “extraordinary.”

The EWTN program then plunged into the comments on homosexuality that were introduced and emphasized by Vatican English correspondent, Fr. Thomas Rosica.

It was not mentioned that Fr. Rosica is well-known to favor a liberalization of Church teaching and practice related to homosexuality, especially given his long relationship with and effusive praise for heretical Canadian former priest and Vatican II advisor, Gregory Baum. Baum has been the leading Catholic in Canada to advocate for acceptance, among many other things, not only of homosexuality itself, but also for acceptance of active homosexual clergy.

Appearing to exercise restraint against what he would really like to reveal about this highly innapropriate incident, Father Murray responded, “there is a concern that all the discussion about homosexuality as it relates to marriage and the family is not being adequately treated in the way it's being reported.” That seemed to be directed to the shocking statements by Fr. Rosica about what the Synod Fathers are alleged to have discussed.

“How will we know if that's the case,” mused Fr. Murray. “Fortunately,” he continued, “the Synod fathers were told that they will have free access to the press, but I would be much happier if we return to earlier Synodal practice where everything was made public so the faithful can follow the discussion.”

Robert Royal expressed concern that “there are 10 people who are going to write the final report,” and among these 10 are Cardinal Baldisseri, who was the chief organizer of last year’s scandalous synod and Archbishop Forte, “who is the author of the notorious midterm report last year.” The difficulty not mentioned is that, despite the obvious unsuitability of Baldisseri and Forte, the bishops who will be writing the report have all been selected by Pope Francis.

Royal also noted that “the way the Synod is set it favors the discussion about a topic that is really closed – communion for the divorced and remarried is not an open question.” However, Fr. Murray expressed concern that “process is overcoming product,” and the fact that the discussion is happening at all “is leading some people to say, ‘I guess the Church doesn't really mean what it used to say.’”

“How to pastorally engage homosexuals and modifying the language used when describing them” was brought up by only couple of bishops in the Synod, said Royal.

Arroyo then showed a video of Fr. Rosica, the official English translator for the Vatican press office, making his authoritative-sounding comments that gave an impression that the issue of homosexuality was one that was widely being discussed among the bishops. The EWTN team seemed alarmed that a mere Vatican translator and reporter was permitted to seemingly greatly exaggerate what took place in the Synod and strongly advocate to the world, as though he were a Synod father, for changes that violated Church moral teachings.

Arroyo then asked a very pointed question to his guests, “Gentleman how big concern is this for the bishops gathered in Rome or is it, as some reporters have suggested, possibly a Vatican reporter (Fr. Rosica) exaggerating the concerns for whatever reason.”

“took people by surprise because it seemed to come out of nowhere. None of the other language reporters mentioned the sensitivity language for homosexuals. The difficulty is, we are all trying to read, as father Murray was saying, since we have no access to what really happens inside the Synod, we have to rely on what we hear from the official spokesman, also from bits and pieces here and there. That seemed to be very odd. Some other reporters have asked Fr. Lombardi, “who is the main spokesman for the Holy See press office? Don't you have some statistics how often the subjects have been brought up. He claims not to have them.”

“What we learned after, just by a stray remark that Archbishop Chaput made… is that language about ‘gays’ had only come up about once or twice at that point. This seems to be something that certain elements within the Vatican are pressing forward immediately and we know that, from our experience in the United States, where there is a great deal of sensitivity and there is this heightened sense of being offended by language, no amount of softened language is ever going to satisfy people whose basic objection is that the Catholic Church regards homosexuality to be, per se, as intrinsically disordered as the Catechism says…Even that phrase is going to be coming up for reconfiguration. I don't see that is going to have very much success or it's going to satisfy anyone who is not already a serious Catholic.”

Arroyo mentioned his general dissatisfaction about the synod arrangements stating,

“Only this morning I tweeted out that journalists are not really covering the Synod. They're covering a press conference about the Synod. This control of information flow, frankly, I don't find it helpful, we don't know who is saying what, and there are many expressions that are being suppressed and ignored.”

Father Gerry was asked for his impression.

“You're right.  Obviously, this process did not occur at past Synods, and now it's going to be up to the Cardinals to go to press conferences outside of the Vatican and say what really happened. That's not really helpful. In fact this is supposed to be all about the culture of encounter and the faithful should have an opportunity to hear what their pastors say and discuss it among themselves, rather than just reporters talking about what reporters are saying.”

Fr. Gerry continued that Canadian “Archbishop Durocher floated the idea of women deacons and said perhaps it is time to permit laymen and women to preach homilies. Doesn’t it risk using up Synod time to allow a hodgepodge of bishops’ pet projects?”

Arroyo related he had a sense that,

“The Synod seems to be a large act of grand international theater without any real finale. The finale will come afterwards when the pope writes whatever document he writes and changes pastoral changes to accommodate the challenges that he sees facing the family today.”

Fr. Murray warned, “Cardinal Kasper’s suggestions are offensive and dangerous. Catholic doctrine must be defended vigorously, otherwise many souls will be imperiled by false teaching.”

“the main thing that we should be doing is affirming the family because that is what makes life as good as it can be. It helps form people. It transmits the faith from one generation to the next. That should be the focus. For the time being it looks like the family is being edged out by some of these peripheral issues.”

See also Robert Royal’s October 12 article, The Devil in the Details, about the confusion and uncertainties of Vatican Press Secretary, Fr. Lombardi, regarding the Synod.

Has the intervention of Pope Francis returned the Synod to heterodox trajectory?