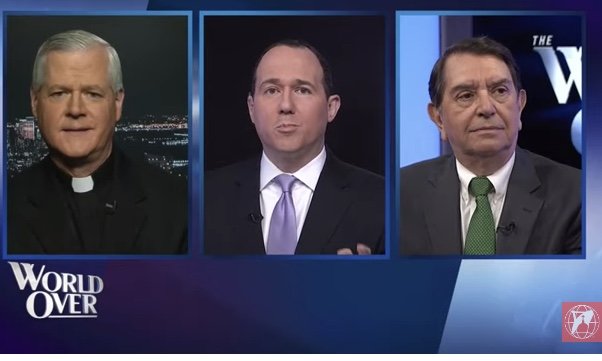 WASHINGTON, D.C., June 21, 2019 (LifeSiteNews) ― The working document for the Amazon Synod has Catholics wondering if the bishops’ meeting isn’t just a sneaky way of introducing married priests and female ordination.

Last night on EWTN’s “The World Over,” journalist Raymond Arroyo, Catholic author and commentator Robert Royal and canon lawyer Fr. Gerald Murray, who together form the “Papal Posse,” told host Raymond Arroyo that they have problems with the “Instrumentum Laboris” for these and other reasons.

The working document for October’s Synod in the Vatican was released on Monday, June 17. Its English translation is entitled “The Amazon: New Paths for the Church and for Integral Ecology.”

One of the issues the work introduces is the idea that there are not enough priests to celebrate Mass in the Amazon, and therefore married men, preferably indigenous elders, should be ordained to the priesthood.

Fr. Murray believes that this is the “fulfillment of a dream” of liberals in the Church after Vatican II, “which was to abolish priestly celibacy.”

“Celibacy is connatural with the priesthood,” Murray argued.

“Jesus Christ was not married. And from the ancient times in the Church, married men who were ordained were asked to live (in continence), and then the Church went to ordaining just celibate males.”

Murray revealed that he has “a lot of problems” with the priest-shortage excuse for the Amazon because the same excuse could be invoked “in different parts of the United States, Europe, wherever you want.”

He also thinks the proposed measure downplays the importance of celibacy in the priesthood.

“Celibacy is an integral gift of God to the Church that has been constitutive of the apostolic efforts of the Church through the centuries, and to cast it aside on the pretext that … people can't get to Mass as frequently as possible in the Amazon! I just don't think that's not something the Church ought to do,” he said.

“We ought to see that this is really a ploy, in my opinion, that needs to be turned aside because it has serious, serious repercussions for the rest of the Church.”

Robert Royal agreed that the measure, supported by German Cardinal Walter Kasper, is not really meant to be restricted to the jungles of the Amazon.

“I think Father is exactly right that this step is not intended to remain solely in the obscure parts of the rainforest in South America,” Royal said.

“I think this is the trial balloon that will get that kind of conversation going,” he continued.

“Even if it's not intended in Rome ― I think it is, but even if it's not, it's very clear that people in the United States, Germany and other places where there are strong liberal contentions will take advantage of that example, that ‘paradigm,’ and say we need to have married priests.”

Arroyo brought up Paragraph 129 of the Instrumentum Laboris, which encourages the world’s bishops to confer some type of “official ministry” on women, “considering the central role they play in the Amazon today.”

Murray believes that this suggestion is both ploy for female ordination, something not intended by God.

“My guess is that the people who wrote this document want to either women deacons or women priests,” he said.

“Let's remember something: the priesthood a sacrament was a gift from Christ to the Church,” he added.

“It wasn't a human invention. It wasn't a good idea the apostles came up with. This was a gift from God to the Church, and therefore it is determined by God's intention and the intention, the Church has always said, is only to ordain men.”

The priest added that the reference to “official ministry” is a slight to the “invaluable” work of evangelization women have always done.

“By focusing on what they call official ministries, they're ignoring the fact that women are among the prime evangelizers in families and communities and parishes and schools, and that work is invaluable,” he declared.

Murray said he saw another attempt here to use a discussion based on the needs of the distant rainforest to say the Church is out of step with what has to be done.

“Whatever Jesus determined for the Church, we not must not only obey it, we must affirm it as being good.”

Another aspect of the document that troubled Arroyo and the Papal Posse was its romantic attitude toward the cultures of the indigenous peoples of the Amazon. It seems to glorify even their pagan elements and to present a pre-industrial way of life as ideal.

It states that “their diverse spiritualities and beliefs motivate them to live in communion with the soil, water, trees, animals, and with day and night. Wise elders ― called interchangeably ‘payés, mestres, wayanga and chamanes’ ― among others, promote the harmony of people among themselves and with the cosmos.”

“It's hard to see what we're bringing,” the journalist said.

“It is mentioned at a couple of points that we're introducing people to Jesus Christ, but everything else is almost (that) they're telling us what the Church ought to be.”

Royal also pointed out that although the shift from an agrarian way of life is bringing problems to the Amazonian peoples, the future will not be a return to “these small indigenous communities living in the rainforest.”

“The future is going to be some, we hope, integration of a cosmic idea of creation with modernity,” he said.

Arroyo took issue with the document’s suggestion that indigenous people can be harmed by the Christian faith.

“I thought the Church's mission was to go and evangelize everyone, bring everybody into Christ’s family, but here they almost make the case that we need to leave these pure people alone,” he told Murray.

‘Yeah, this is a ‘misplaced romanticism,’ as Bob says,” the priest replied, “the idea (that) the noble savage was ruined by contact with Western man.”

“This is nonsense,” he continued.

“I’ll be blunt. The Catholic Church was created by Jesus Christ in order to promote the salvation of the world. Jesus picked the place. It started in Israel, went to Europe, and then the Europeans brought it to many places in the New World, including Latin America.”

When Murray studied Spanish in Ecuador as a seminarian, he noticed that the indigenous people were very devout and loved the Catholic Church. Thus, he thinks that for the Church to praise the “local pagan priests” and insinuate that “they’re gonna teach us what it means to be human” is “counter-intuitive” and “really destructive.”

“What needs to be done is the Church should send missionaries to all the different places and announce to them the Good News of Jesus Christ and then purify what is bad in those cultures,” he said.

The idea that people live in peace until Europeans turn up is not proven by history, he said, and it is “certainly not part of the Gospel understanding of Divine Providence.”