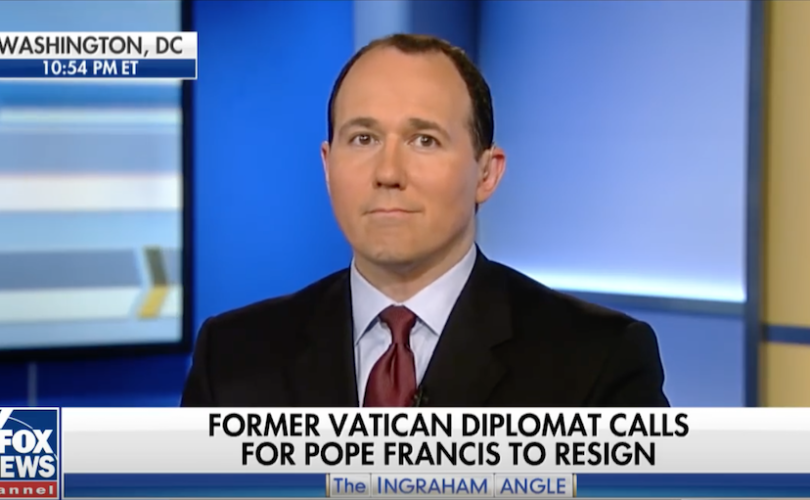 In a segment on The Ingraham Angle (view below), Fox News host Laura Ingraham and Raymond Arroyo discussed the explosive charges against Pope Francis and the reaction to the Viganò revelations.

Archbshop Viganò “was the Vatican Nuncio to the United States for about five years,” from 2011-2016, Arroyo explained to viewers. Prior to his post in Washington D.C, Viganò “also ran all of the Vatican embassies around the world for the Vatican,” he said.

Asked how the former U.S. Nuncio is generally regarded, Arroyo said he is “very well respected, is a man of integrity, a sharp shooter, and a man who has been a whistle blower in the past.”

“In 2011 he wrote secret letters to Pope Benedict … outing corruption in the Vatican. Those were leaked and became the Vatileaks scandal. It was his exposés, meant only for the Pope’s eyes, that got worlwide attention,” Arroyo said.

Asked by Laura Ingraham why Viganò, 77, is releasing his testimony now, Arroyo said the former U.S. Nuncio “claims he wants to unveil his conscience, he can’t go to his death with the information he has, and he sees the corruption and the double-dealing in the Vatican, and he’s exposing it.”

Viganò’s principal allegation, Arroyo specified, is that “between 2009 and 2010, Pope Benedict imposed a penalty on Archbishop McCarrick, because he knew they had paid settlements to men that he had abused. He also took him out of public ministry,” he said. “Now when Pope Francis became pope, Vigano said he informed the Pope himself of McCarrick’s misdeeds, the Pope ignored this and restored McCarrick. That’s the charge.”

Puting up a full-screen of an excerpt from Viganò’s testimony, Arroyo highlighted his call for the Pope to resign:

[Pope Francis] knew from at least June 23, 2013 that McCarrick was a serial predator …

In this extremely dramatic moment for the universal Church, he must acknowledge his mistakes and, in keeping with the proclaimed principle of zero tolerance, Pope Francis must be the first to set a good example for cardinals and bishops who covered up McCarrick’s abuses and resign along with all of them.

“This is exploding all over the world,” Ingraham said, “and comes on the heels of the World Meeting of Famlies, which was not well attended.”

Arroyo then showed a video excerpt from Pope Francis’ inflight press conference on Sunday evening, on his return from Ireland. During the presser, the Pope told the media that he’s “not going to say a word” about the McCarrick cover-up — despite that fact that, one day prior, he was “very tough in [his] condemnation of McCarrick” in comments to Marie Collins, an abuse survivor and fomer member of the Vatican’s abuse commission (watch here). Pope Francis told journalists:

“This morning I read that statement. I read it, and I will say sincerely that I must tell you all this — you [CBS] and all of you who are interested: Read the statement carefully yourselves and make your own judgment. I am not going to say a word about this. I believe that the statement speaks for itself.”

Arroyo pushed back, commenting: “Well, many Catholics are saying it speaks for itself and they feel the Pope should have done some disclaimer, said something. It looks like an evasive answer and makes the Pope look bad.”

“In the meantime,” he said, “bishops around the United States and the world — Tyler, Texas, Arizona and the entire Conference of Catholic Bishops say these are credible charges that need full investigation. They’re demanding that from Pope Francis.”

On Sunday, the president of the U.S. Conference of Catholic Bishops (USCCB) called for an impartial investigation into the allegations by Archbishop Viganò. Reiterating his commitment to pursuing justice for victims, Cardinal Daniel N. DiNardo said the 11-page testimony could not be ignored.

“The recent letter of Archbishop Carlo Maria Viganò brings particular focus and urgency to this examination,” DiNardo wrote in a statement posted on the USCCB website.

Could this “lead to the ‘ouster’ of a Pope?,” Laura Ingraham asked Arroyo, to which he replied: “We’ll see. There’s no mechanism for that, but we’ll continue on this story.”