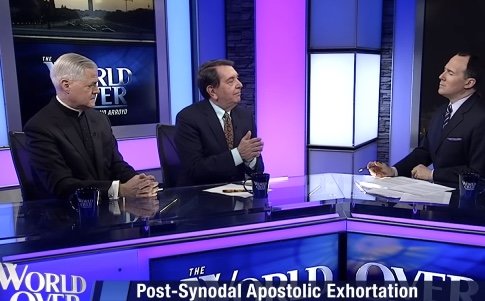 February 14, 2020 (LifeSiteNews) – Raymond Arroyo, host of “The World Over” on EWTN, questioned on his show yesterday why Pope Francis’ post-synodal Apostolic Exhortation “Querida Amazonia” does not give “clear answers.”

“And the other thing, we keep hearing this term. The liturgy should be incarnate. Care for the environment should be incarnate,” Arroyo said, asking, “I’m not quite sure what that means, but why aren’t clear answers incarnate in these documents from the Church?”

Robert Royal, editor in chief of The Catholic Thing, named ambiguity as “a hallmark of what the Holy Father does.” In the context of the publication “Querida Amazonia,” he said Pope Francis might have intended to leave the door open to married priests by referring to the final document of the synod published last October.

On this, Royal disagreed with Father Gerald Murray, a canon lawyer and pastor within the Archdiocese of New York. Both made their comments on the Feb. 13 edition of “The World Over,” a news show on EWTN hosted by Raymond Arroyo. Murray and Royal are often called the papal posse.

“I think it was a very happy day when the synod document was issued by Pope Francis, because he was asked by the synod for two things. One is to have married men ordained priests, and secondly to have women ordained as deacons. And the Pope did not grant those requests,” Murray said.

Nevertheless, he later cautioned that “anything can happen.”

Murray pointed out that the Pope emphasized in “Querida Amazonia” to pray for vocations and send missionaries to the Amazon region.

Arroyo mentioned that some progressives blame conservative men of the Church, for instance Pope Emeritus Benedict XVI, Cardinal Robert Sarah, and Cardinal Gerhard Müller, for elevating the issue of celibacy.

Murray set the record straight, showing that Pope Francis himself had first talked about an Amazon synod in reference to Bishop Fritz Lobinger, who had written a book about ordaining viri probati, proven men, as priests.

“The Pope then put it on the synod agenda. He made an advocate of that proposal to ordain married men, Cardinal Hummes from Brazil, the relator general. He was the one who was basically spearheading the document that came out of the synod,” Murray stated.

“To say that a controversy that should never have occurred, occurred because some recalcitrant people defended the tradition of the Church, that is just a basic debating tactic used to end the debate,” he added.

Royal continued in this vein by referring to comments made by Pope Francis to American bishops. The bishops were in Rome for their routine visit with the Holy Father, which happens every five years. “He was even denying that married priests were a major part of why he convened the synod in the first place,” according to Royal.

He asked, “If that was meant to deal with the Amazon, with certain elements that are having universal application, why not then hold that meeting in the Amazon itself?”

“Instead, they brought it to Rome, and they brought Pachamama, as well, to Rome. They created the expectation that what was being talked about there was inevitably going to have applications for the universal Church,” said Royal.

Royal suggested to take the document as written. “And we say, that’s as far as it goes, and no farther. All the rest is speculation, but it is not to be ignored that there is a possibility that something else can come back,” he clarified.

Father Murray talked about a distinction between moral and magisterial authority. The distinction had been introduced by Cardinal Michael Czerny during the presentation of “Querida Amazonia” in the Vatican.

Czerny, who served as special secretary for the Amazon synod, discussed the “status of the two documents” and where they “fit into the magisterium.” Regarding the final document, he said that “apart from formal magisterial authority,” the Pope’s “official presentation and encouragement” confer on it “a certain moral authority,” LifeSiteNews reported Wednesday.

Murray called that language “canonical fuzz talk.” The final document, he added, “is a bunch of suggestions by a synod. Does this leave a back door? Anything can happen.” At the same time, after two years of discussions about making celibacy optional, “there is no married clergy” contained in the new document.

Asked about the poetic language of “Querida Amazonia,” Robert Royal voiced his criticism of what he called “Amazonian Dreaming.” He said it is “not helpful for the kinds of problems that we’re facing.”

“The idea that somehow mysticism, or prophecy, or quoting poets … is somehow going to give us anything other than kind of a warm feeling about what we ought to do? It doesn’t seem to me that that goes very far,” Royal responded to Arroyo.

On the question of female deacons, Father Murray praised what Francis wrote in the Apostolic Exhortation. “To say women are underappreciated in the Church is an absolute falsehood, a calumny that’s used, basically, to get power,” the canon lawyer argued. He added, “People who want to un-Catholicize the Church are those who are proposing women’s ordination, and the Pope has said no.”

Regarding the Pachamama statues used during the Amazon synod, Murray said the Pope’s claim, according to which it is possible “to take up an indigenous symbol in some way, without necessarily considering it as idolatry,” might be possible, “but it’s not advisable.”

“Paganism is not a beneficent nature story in which people get along. Paganism is about fear of pagan gods who are vicious and who hurt people. You placate them, as the Aztecs did, by killing human beings. Paganism is about primal fears and anxieties that are not remedied because they don’t know the true God. It’s diabolical in origin and inspiration,” Father Murray explained unequivocally.

The papal posse touched on a number of other issues, for instance, the suspension of Archbishop Georg Gänswein, the speech by Bishop Robert McElroy of San Diego, who said climate change could be considered “uniquely preeminent in Catholic social teaching,” and Bishop Marcelo Sánchez Sorondo giving communion to the president of Argentina and his mistress.

PETITION: Catholics call on the Vatican to affirm all salvation comes through Jesus Sign the petition here.