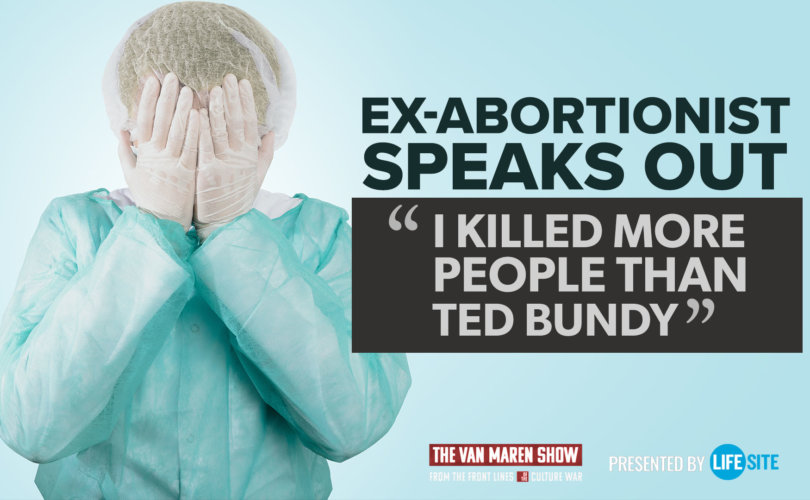 November 6, 2019 (LifeSiteNews) – In today’s episode of The Van Maren Show, Jonathon Van Maren speaks with Dr. Kathi Aultman, a former abortionist. Dr. Aultman has testified on behalf of a wide range of pro-life laws across the United States. She has also testified before Congress about the horrors of the abortion industry.

Dr. Aultman has seen what abortion does to our entire society. Dr. Aultman went from being somebody who had heard about abortion but had never really considered it to somebody who performed abortions – and then eventually ended up testifying in front of Congress about why America should make abortion illegal again.

Aultman shares the story of her own abortion and how this planted the seed for her to become an advocate for abortion and what she thought were “women’s rights.” It was only after giving birth for the first time that Aultman was able to recognize the humanity of the unborn.

“But after I delivered, when I went back to work in the clinic, I found I couldn't do them [abortions] anymore. The baby not being wanted was no longer enough justification for me to kill it.”

The graphic nature of abortion is just as horrific as images of it show, according to Aultman.

“It's exactly what the pictures show. I mean, how can it be otherwise? You're tearing this little body limb from limb.”

This didn’t immediately make Dr.Aultman pro-life, however. She shares that even after she stopped committing abortions, she still referred patients for abortions.

“Even though I couldn't stomach doing abortions myself, I was still a real pro-choice advocate.”

Seeing children at her church and seeing the impacts of abortion on her patients slowly started to change Aultman’s heart. It was an article that compared abortion to the Holocaust that finally changed Aultman’s mind.

“My father was with the unit that liberated the first concentration camp in World War II. And so I grew up with those stories and pictures. And when I became a doctor, I couldn't understand how the German doctors could do what they did.”

Aultman shares that reading this article was the “first time that I saw myself as a mass murderer.”

After this conversion, Aultman testified in Florida and Vermont and eventually was invited to testify before the United States Congress.

Van Maren asks Aultman what she wished everyone could understand about abortion. Her response? “That these are human beings.”