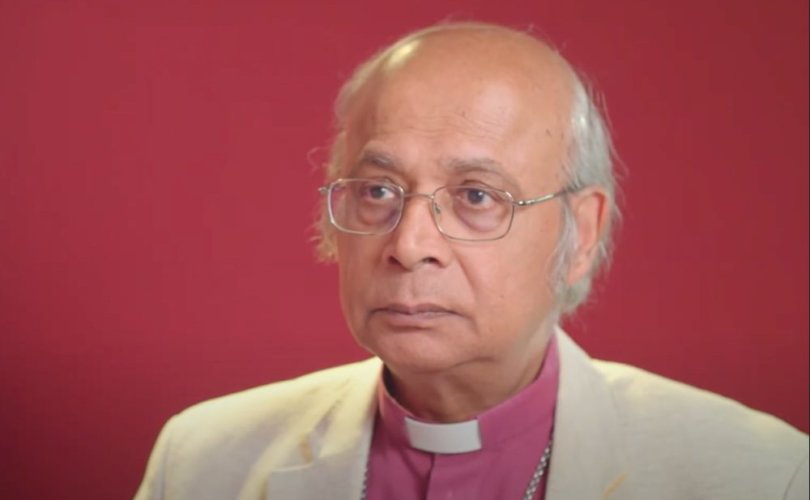 LONDON (LifeSiteNews) – A prominent, pro-life former Anglican bishop is set to be ordained a Catholic priest in what is being touted as the “most significant conversion to Catholicism” since 1994.

The Spectator reported today that Michael Nazir-Ali has joined the Catholic Church and is in the process of becoming a priest in the Personal Ordinariate of Our Lady of Walsingham.

The Ordinariate then released a statement noting that Nazir-Ali was received into “full communion of the Catholic Church by Monsignor Keith Newton on the Feast of St. Michael and All Angels,” September 29. “With the permission of the Holy See, he will be ordained to the Catholic priesthood for the Ordinariate in due course.”

Nazir-Ali served as bishop of Rochester from 1994 through 2009 having previously been the General Secretary of the Church Missionary Society from 1989 to 1994 as well as the bishop of Raiwind in his native Pakistan.

Commenting on his reception, Nazir-Ali declared, “I believe that the Anglican desire to adhere to apostolic, patristic and conciliar teaching can now best be maintained in the Ordinariate.”

“Provisions there to safeguard legitimate Anglican patrimony are very encouraging and, I believe, that such patrimony in its Liturgy, approaches to biblical study, pastoral commitment to the community, methods of moral theology and much else besides has a great deal to offer the wider Church.”

“I am looking forward to receiving from the riches of other parts of the Church, while perhaps making a modest contribution to the maintenance and enhancement of Anglican patrimony within the wider fellowship,” he added.

The Telegraph revealed that the former bishop of Rochester confirmed how he had been considering the move “for some years,” and had previously penned an op-ed in The Telegraph accusing the Church of England of being preoccupied with “jumping on faddish bandwagons.”

“He brings a great experience of the Anglican Communion and is in a unique place to articulate that Anglican patrimony, described by Pope Benedict XVI as a treasure to be shared, which now has an honored place in the Universal Church,” Newton continued.

Since Nazir-Ali is married, he is not eligible to be made a bishop, but will be ordained a priest “in due course.”

The news has already been welcomed online by a number of Ordinariate priests, including Father Ed Tomlinson, who wrote, “We are so pleased in my parish.”

Meanwhile, the Church of England’s highest ranking cleric, Archbishop Justin Welby, wrote that he was “grateful for Michael Nazir-Ali’s decades of devoted service to the Church of England and the Anglican Communion. His expertise in evangelism, interfaith dialogue, ecumenism, and theological education has been a great gift. He will continue to be a blessing to the global church as he joins the ordinariate. I will be praying for him and his wife, Valerie, that this new step in their journey might draw them ever closer to God in Christ.”

— Article continues below Petition —
PETITION: Urge "Catholic" Terry McAuliffe to renounce his promotion of abortion
Show Petition Text
1728 have signed the petition.
Let's get to 2500!
Thank you for signing this petition!
Add your signature:
Show Petition Text

The Spectator’s Damian Thompson wrote how Nazir-Ali’s “defence of Christian civilisation has been far more outspoken than that of any English Catholic bishop.”

As such, his conversion “will be welcomed by conservative Catholics dismayed by the doctrinal confusion surrounding the ‘synodal path’ endorsed by Pope Francis, which appears to be moving the Church in the direction of liberal Anglicanism,” Thompson noted.

The cleric is a notable expert on Islam, and as such has previously spoken out against the trend to disassociate Muslim terrorists from Islam.

Furthermore, the 72-year-old Nazir-Ali is staunchly opposed to abortion and same-sex “marriage.” To mark the 43rd anniversary of the U.K.’s abortion act in 2010, he spoke of the Scriptural evidence for life beginning at conception, as well as the “seriousness of the sin” of abortion.

Then in 2018, he led the closing prayer vigil at the U.K.’s national March for Life in London.

Nazir-Ali is also outspoken in his criticism of same-sex “marriage,” and in 2013 he attacked the Church of England’s stance on such relations, pointing once more to the Scriptural arguments against such “marriage.”

Early last year, he reiterated his comments, saying “marriage between one man and one woman is the proper context for sexual expression and that sexual relationships outside such an understanding of marriage fall short of God’s purposes.”

He has also been an outspoken critic of the church closures due to COVID-19 related policies, defending the rights of churches to remain open, and one was on 25 high-profile signatories in a May 2020 letter to the U.K. government protesting the church closures during the COVID restrictions.

Nazir-Ali joins a growing number of Anglican clerics who have now been received into the Catholic Church, a process assisted since the establishment of the Ordinariate by Pope Benedict XVI in 2011.