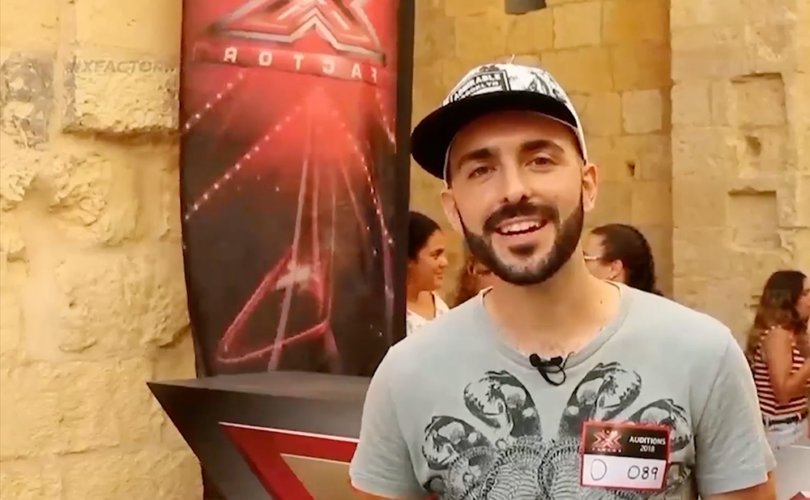 GWARDAMANGA, Malta, October 29, 2018 (LifeSiteNews) – A Christian singer has received backlash from his country's government after declaring in his audition video for a famous television talent competition that he had been inspired by his Christian faith to give up homosexuality and that sexual acts outside of male/female marriage are a “sin.”

Matthew Grech, 29, a contestant in Malta’s first season of reality TV show “The X-Factor”, disclosed in an official video introducing himself to viewers that he had changed his life radically after finding God (video can be viewed here at top of page).

“I was already a bit spiritual, but I was looking for the truth in my life,” he said. “I had a personal revelation of who Jesus Christ is, and I decided to follow Him, I gave all my life to Him. For many years, I focused on my faith. I set aside my ambitions and dreams and said to myself: “This Jesus is so real in my life, that it’s worth it to set everything aside to get to know Him well.”

Grech’s next part of his monologue created a firestorm of controversy.

“I had been in the homosexual lifestyle. After finding my faith in Christ, I appreciated the design that God created,” he continued. “He created marriage between man and woman, and everything that is outside of marriage context is not God’s will, and therefore falls under the category of sin.”

“This does not mean that man and man cannot love each other, and that woman and woman cannot love each other,” he continued.  “There are some who don’t understand the biblical message correctly and ask questions. Sexual love is only reserved for man and woman who are married in Christ. This message is not addressed to those who don’t want God in their life. This message is addressed to those who desire to walk in God’s righteousness. I am single and happy, and open to get married to the woman of my life.

The audition interview was pre-recorded, and Grech told LifeSiteNews that it was edited the way the producers saw fitting.

Grech’s audition piece got him through to the next round, and while judging him, none of the celebrity judges mentioned his introduction. The controversy began only after a clip of Grech’s monologue was aired with his audition piece on Malta’s national television network last Sunday night.

The introduction, and the audition, were posted to Youtube but removed minutes after they were aired. However, indignant viewers continued to complain about the clip on X-Factor Malta’s Facebook page. Many assumed that Grech was extolling, not conversion in Christ, but conversion therapy.

“Great show giving Maltese talent an amazing platform. That is, until you allowed someone to use your platform to promote Gay conversion therapy which is actually illegal in this country,” wrote a  viewer named Westacott Trevor. “It is disgraceful that you chose to air his ‘opinion’ and to add insult to injury attempt to ‘balance’ it out with a gay couples story.”

Grech denies having mentioned conversion therapy in his self-introduction.

“It's just an LGBT fabrication which is a way for them to start silencing ex-gays and Christians,” he told LifeSiteNews.

X-Factor Malta was quick to apologize for its contestant’s remarks.

“We would like to make it very clear that no part of Matthew Grech’s original audition was intended to cause offence, nor were the views expressed those of the producers of the program,” read the official statement posted to Facebook the following day.

“Our focus is the talent and the music, and we wouldn’t ever want anything to get in the way of that.”

The Maltese government also made a statement on Monday about the singer’s remarks. According to the Times of Malta, they were particularly concerned to bash “conversion therapy”:

“While the government condemns all such homophobic comments, broadcasting this message, without calling out the harm caused by ‘conversion therapy’ is damaging,” it stated.

“It puts at risk those youths who are vulnerable to such practices despite Malta’s adoption of strict legislation [against conversion therapy] in 2016.”

The government reminded citizens of a special hotline they can call if they would like to speak with a SOGIGESC (sexual orientation, gender identity, gender expression, and sex characteristics) representative and added a dose of theology:

“LGBTIQ people do not need any cure or forgiveness… Sexual orientation is not a lifestyle but is present in all people and manifests itself in affectionate and sexual attraction,” the government stated.

This is not the first time Grech has brought his story of conversion to Maltese television. He told LifeSiteNews that he had appeared on primetime talk show Xarabank, Skjetti, and other mainstream shows. He has also appeared on his pastor’s programme on a minor TV station.

“I was brought up as a Catholic,” he told LifeSiteNews. “Aged 19, I moved to London to find a breakthrough for my musical career. That was my turning point, I was evangelised, and I was led to an encounter with the Lord Jesus Christ.”

Grech became a member of what is now the KingsGate Community Church in London, and when he moved back to Malta in 2012, he joined the River of Love Christian Fellowship in Zebbug.

“I've been faithful to my church ever since,” he said. “Been on TV many times, spoke about gay ‘marriage,’ and exposed the sins of the nation with the authority of the word of God and the power of the Spirit.”

“I've also been longing to find my musical direction, yet I was consumed by a strong passion for the church,” he added.

Grech has not been cut from the show.

In 2014, the River of Love Christian Fellowship presented Maltese MPs with a petition signed by 10,000 people asking them to block the “Civil Unions Bill” that would allow gay couples to have a state-recognized partnership and to adopt children.  The pastor of the community, Dr. Gordon-John Manché,  told the Times of Malta that he does not perform “conversion therapy” on same-sex attracted people, but brings them to terms with their “wrong-doing.”