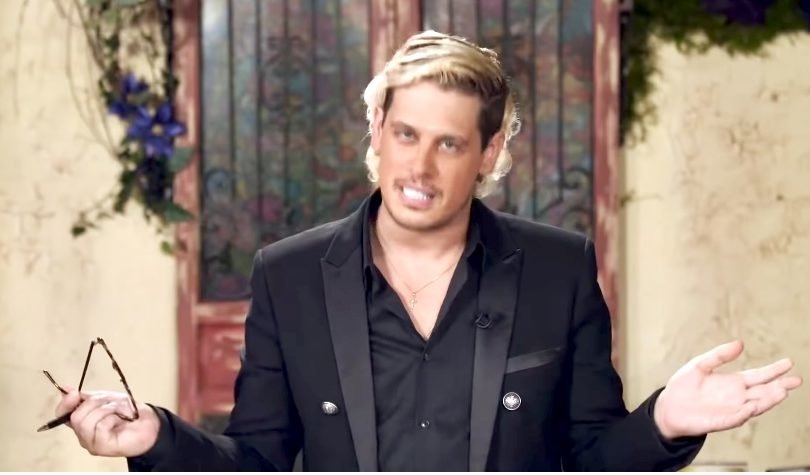 June 21, 2021 (LifeSiteNews) – One year after rejecting homosexuality and beginning a chaste life, Milo Yiannopoulos has delivered a message of hope to his “gay” brothers and friends.

“It’s a year from the day I said I was going to put sodomy and lust behind me and live more closely to God’s wishes for me,” began Yiannopoulos in a video published Friday, “and since I did that, everything in my life has begun to get better.”

In March, Yiannopoulos revealed that he now that he describes himself as “Ex-Gay” and “sodomy free,” and that he was leading a daily consecration to St. Joseph online.

“I didn’t wake up today especially celebratory, but rather, prayerful, because I’m aware that I have a responsibility to share this gift with others,” explained Yiannopoulos.

He said he has managed to get where he is now through prayer, “appealing to our heavenly Father for the strength to resist urges.” He also offered thanks to his followers and to “the haters, the skeptics, the deniers. It’s the scorn and doubt poured upon this … that has made it a pleasure to prove people wrong.”

“It’s also those of you who have been keeping me accountable,” he acknowledged.  “I’ve always said on the show and sometimes in strong language — sometimes in a way that offends people — that tough love is the love that matters.”

“My readers and listeners have given me just that,” he said.  “They’ve given me a lot of tough love, and without that, I don’t know if I’d be here today.”

“Born this way” is a lie. It’s propaganda. It’s not true. You can change.

“I know I have a responsibility, a spiritual and moral obligation to make good to the people I’ve hurt, and to reach minds that I haven’t touched yet and offer them help if I can to embark on the same journey that I’m currently engaged on,” he said.

This message today is for you: If you’re one of those people that thinks of themselves as ‘gay,’ but in the back of your mind something has always not quite been right about it; You’ve sort of known that this is not really what you want. Perhaps you’ve looked at gay ‘Pride’ as I have with a mix of consternation and horror; something twists in the pit of your stomach when you see it?

If that does describe you — and even if it doesn’t — I have good news for you:  “Born this way” is a lie. It’s propaganda. It’s not true.

You can get better. You can change. You can live as you were always supposed to. When you do that, everything in your life will start to get better. It has for me.

Yiannopoulos explained that he moved to Florida in order to open up a clinic for other men who suffer from same-sex attraction, and that fundraising and interviewing therapists who might work at the center has already begun.

“We’re not quite open yet,” allowed Yiannopoulos, “therefore today my message to you, for now, is merely one of hope.”

“So watch this space. Try in whatever small, small way you can to make changes in your life. Seek out the advice of your priest,” urged Yiannopoulos.

“In the meantime, I love you,” he declared, “and I’m going to do everything I can to provide you with the tools you need to get better.”

“What you feel at the moment — an inexorable and unavoidable sexuality — is just the product of trauma that you might not even realize you suffered, but you did.”

“I’m going to help you,” he promised.

In March, Yiannopoulos rocked the world when he first announced his plan to open a “reparative therapy” center in the Sunshine state.

“There is an enormous demand for this among people who believe they’ve been led astray by … the gay establishment,” Yiannopoulos told the New York Post.

“Conversion therapy has a terrible reputation for precisely the reason that a lot of other things associated closely with either the religious right or the nationalist right have a terrible reputation,” he said, “because they’ve been lied about consistently and strategically for decades.”