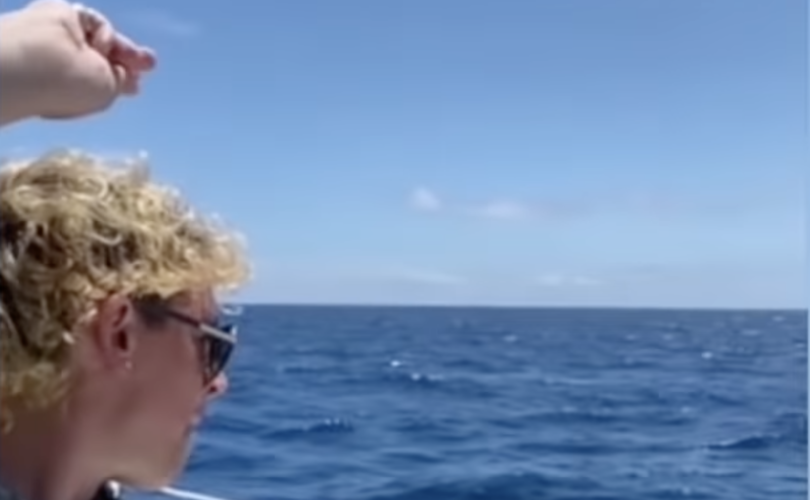 HONOLULU, Hawaii, May 3, 2021 (LifeSiteNews) — Ex-gay Milo Yiannopoulos has tossed his four-carat, $150,000 homosexual engagement ring — which he has dubbed a “Sodomy Stone” — into the depths of the Pacific Ocean off the coast of Hawaii.

“My checking account has about $800 in it right now, and the last ten years have exhausted my savings. But this is something I had to do,” wrote Yiannopoulos on his YouTube posting.

“You can’t build something beautiful and true on a bedrock of filth and lies,” he added. “The ‘Sodomy Stone.’ That’s the name I’ve given to the gigantic engagement ring I bought myself as part of a union I now regard as somewhat infernal,” Yiannopoulos explained at the start of his video, which identified him as a “former sodomite.”

“I’ve been thinking a lot lately about what’s real and not real in my life,” said Yiannopoulos, “and about the trappings of my former life that would be a good idea to get rid of.”

“And the more I looked at this gigantic, four-carat money pit, the more I thought, ‘this is a perfect example of some of the lies I bought into in my previous life,” he continued. “For example, I bought into the lie that I could be a rabid culture warrior for the right, and a sodomite, at the same time. I can’t.”

While Yiannopoulis had originally hoped to cast his “Sodomy Stone” into the active volcano on the Big Island of Hawaii, that plan turned out to be unfeasable. And so he settled for tossing his valuable ring off the side of a chartered boat, a couple miles off the coast of Honolulu.

“I’ve prayed, drunk an enormous amount of vodka, and reminded myself that nothing beautiful and true can be made or grow on a foundation of wickedness,” he said, holding the ring in his hands, while the theme from Titanic plays in the background.

Yiannopoulos shook the world when he told LifeSiteNews in March that he is now “ex-gay” and consecrating his life to St. Joseph:

The guy I live with has been demoted to housemate, which hasn’t been easy for either of us. It helps that I can still just about afford to keep him in Givenchy and a new Porsche every year. Could be worse for him, I guess.

My own life has changed dramatically, though it crept up on me while I wasn’t paying attention. I’m someone who responds to micromanagement and accountability, so I’ve found counting days an effective bulwark against sin. In the last 250 days I’ve only slipped once, which is a lot better than I predicted I would do.

It feels as though a veil has been lifted in my house — like there’s something more real and honest going on than before. It’s been a gradual uncovering, rather than a dramatic reveal. Maybe that lack of theater or spectacle is a sign the gay impulses truly are receding?

The best metaphor I know is that of a flower blooming — of nature’s Epiphany — an image I know Caryll Houselander was fond of. I think it was Houselander who said, “Whatever is loving in man and whatever is lovable in man is Christ in man.” I take this to mean that the more love and the less lust in us, the more we cease to obscure Christ and instead reveal Him, in whose image we are made.

I don’t mean to suggest it’s been easy, just simple: Our Lord endured worse than any of us and promised us that we have to take up a heavy cross each day. Ronald Knox says the Via Crucis shows us the 3 ways we can carry our cross: With bitterness, like the unrepentant thief; with grim resignation, like the repentant thief who said it was what he deserved; or with love, like the Lord, who never minimized suffering but said it would, in God’s time, redeem us.

Secretly, I feel I’ve done enough good in this life to excuse me from earthly penance for past sins. Your readers will no doubt respond, rightly, that this statement demonstrates how far I have to go. The best advice I can give others in my situation is: Check your pride, not your privilege. So often it’s vanity or conceit or self-satisfaction that gets in the way of accepting Christ. Learn to catch it before it takes root, and difficult things suddenly don’t seem so difficult.

He explained his devotion to St. Joseph:

Secular attempts at recovery from sin are either temporary or completely ineffective. Salvation can only be achieved through devotion to Christ and the works of the Holy, Catholic and Apostolic Church. St. Joseph is the spiritual father figure of the Holy Family. In this time of gender madness, devoting myself to the male protector of the infant Jesus is an act of faith in God’s Holy Patriarch, and a rejection of the Terror of transsexuals. Trannies are demonic: They are the Galli, the castrated priests of Cybele, the Magna mater, whom Augustine saw dancing in the streets of Carthage dressed like women.