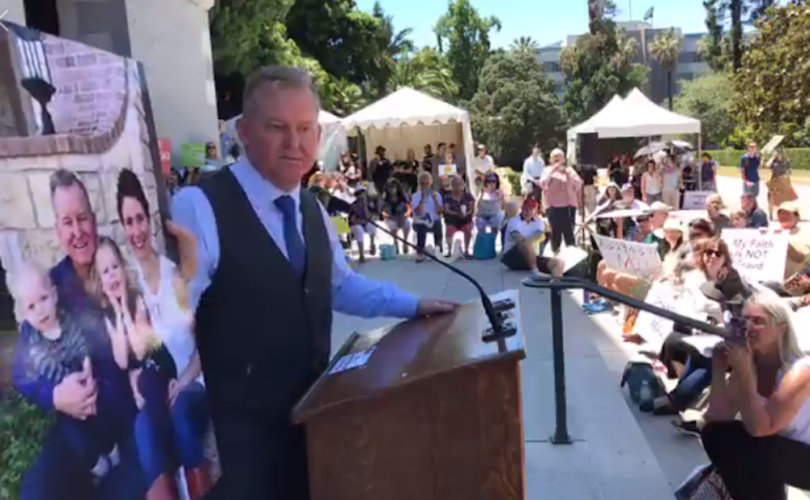 SACRAMENTO, Calif., June 13, 2018 (LifeSiteNews) – In an amazing show of force, 30 former gay and transgendered people took to a podium outside the California statehouse to oppose a proposed law banning therapy and printed resources helping those who seek freedom from LGBTQ+ identities and lifestyles.

Known as AB2943, the California Assembly Bill would essentially criminalize most if not all faith-based efforts to counsel members of the LGBTQ community.

“California legislators have publicly claimed that change is impossible and those people simply don’t exist,” said a press release in advance of the event. “While the state celebrates those who embrace an LGBTQ+ identity, this bill will deny such choice and fluidity from anyone seeking to move in the opposite direction.”

At the rally, one former gay pointed out, “In ‘LGBTQ+’ the Q stands for ‘questioning,’” pointing out the hypocrisy of a law that allows all persons to question whether they might be gay but forbids gays to question their sexual orientation. “Let’s not talk out of both sides of our mouths here,” he added.

“This legislation actually takes away rights from those who are questioning their sexuality,” said Ken Williams, co-founder of Equipped to Love. “We don’t want to see an America where the government is controlling how people identify sexually.”

“Women in California, not the government, should have complete authority over their sexuality and sexual expression,” said Elizabeth Woning, co-founder of Equipped to Love. “We all must be empowered to choose counseling and resources that align with our personal life goals.”

Luis Javier Cruz, one of the survivors of the Orlando, Florida, Pulse Nightclub massacre, noted the two-year anniversary of that tragic event where 49 were killed by a gunman.

Through that horrific experience, Cruz says he “found out that Jesus is the only man in my life who would die for me.”

“The government should not dictate to us how we choose to live our lives,” continued Cruz. “If we can celebrate going in” the gay lifestyle, “we should be free to celebrate coming out of it.

“I was shot six times. I had a shattered femur. I was told I probably wouldn’t walk again, but now I am a walking miracle,” said another Pulse survivor, Angel Colon.

“I want others to have the freedom to experience this,” continued Colon. “Vote ‘No’ for AB2943.”

“We’re not talking about taking choices off the table,” said one ex-lesbian, who is happily married to her husband and has two children. “We are talking about putting more choices on the table.” She added that if AB2943 had been around years ago, it would have pushed her back in the closet rather than letting her find the freedom she sought. “Let’s make freedom a choice for everyone.”

“If AB2943 were enacted as law when I was a young person,” said ex-gay Drew Berryessa, “I would not have found hope in my life.”

“I take exception to the wording of this bill which calls the Gospel a fraud,” he said, explaining that the world once insisted that he identify as gay. “Yet I stand here today as a man married for 15 years, with three beautiful daughters.”

“The opposite of homosexuality is not heterosexuality: It’s holiness,” added Berryessa.

Twenty-year-old Jacob said no one ever suspected that he was same-sex attracted when he was growing up. He played football, wrestled, and threw the discus in high school. He lived as gay man for a while but then left about six months ago.

Jacob brought down the house when he said he found out that “girls’ skin and hair is so soft. It’s like I’m going through puberty all over again.”

“This legislation would block young people from making a choice,” he added.  “Don’t pass the bill!”

Another man said it was a book that somebody gave him that saved his life. “That book would be illegal if AB2943 were to be passed,” said Andrew Franklin. “I learned how to have healthier relationships through this. Nobody forced me to change. I wanted to change.”

Franklin said this to counteract the notion promoted by mainstream media that teens and adults are forced to change by what is popular labeled “conversion therapy.”

Christopher Simms, who suffered much abuse when he was young, once wanted to be a woman, and got involved with drugs and alcohol. Then he experienced healing through conversion to Christ. He explained that he used to have a deep desire to know men sexually and romantically, but no more.

Speaking to the legislators in the building behind him, Simms pleaded, “Please don’t close the door on people like me who experience same-sex attraction or gender dysphoria because we were abused as children.”

AB2943 declares the Gospel is a fraud

The proposed legislation, AB 2943, adds “(a)dvertising, offering to engage in, or engaging in sexual orientation change efforts with an individual” to the state’s list of illegal “unfair methods of competition and unfair or deceptive acts or practices undertaken by any person in a transaction intended to result or that results in the sale or lease of goods or services to any consumer.”

It essentially classifies such material and practices as “fraudulent.”

One former gay said the proposed law proclaims “we are all frauds, that we don’t exist. But we are real.”

“If God gives us the freedom to choose,” he asked, “How dare the California assembly dare to limit or deny our rights?”

“The gospel is not a fraud,” said Dean Broyals, president for of the National Center for Law & Policy at a press conference after the rally. “Yet this bill declares it is.”