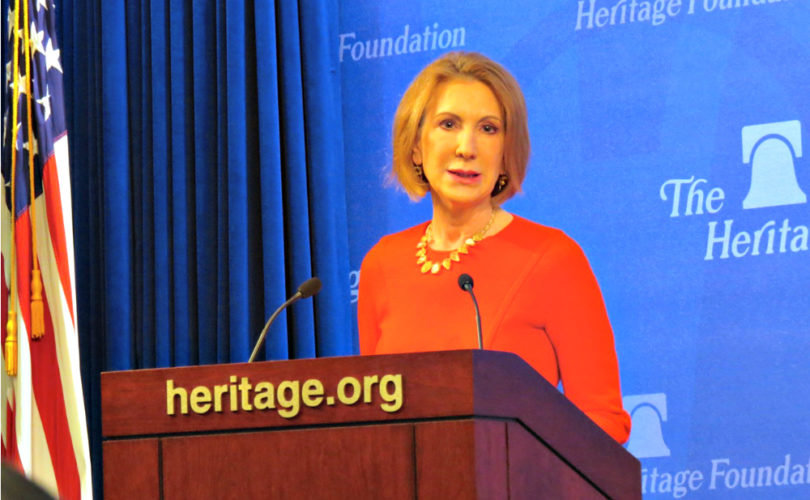 June 26, 2020 (LifeSiteNews) – Failed 2016 presidential candidate Carly Fiorina is the latest Republican to declare President Donald Trump so beyond the pale that she’s voting for former Vice President Joe Biden instead, ignoring his wholesale rejection of her own stated values on the sanctity of life.

Fiorina, the former Hewlett-Packard CEO who was also briefly the running mate for Sen. Ted Cruz’s (R-Texas) own presidential primary run, told The Atlantic’s Edward-Isaac Dovere on Thursday that she “can’t support Donald Trump” and because “elections are binary choices” she will vote for Biden in November.

“I think we have witnessed, particularly in the era of Trump — but prior to that as well — what George Washington warned us about, which is that the trouble with political parties is people will come to care only about winning, and they’ll forget about values and governing,” she said. By contrast, “I think — I hope — that Biden understands that this moment in history calls for him to be a leader, not a politician.”

Calling Biden a “person of humility and empathy and character,” Fiorina claimed that when the Democrat “talks about the soul of the nation,” he’s talking about “principles like co-equal branches of government, principles like problem-solving should be a collaborative process, a bipartisan process.”

Dovere did question Fiorina on the apparent conflict between her stated pro-life positions and Biden’s pro-abortion platform.

She first lamented that the “extremes” on both sides of the abortion debate are allegedly impeding progress, and called on Congress to change course by starting with a 20-week abortion ban, then called for expanding the meaning of “pro-life” to encompass “criminal-justice reform” (which is generally code for greater leniency in punishing crimes) and unspecified “police reform.” She also endorsed the left-wing claim that “systemic racism” leads to black Americans being “murdered in broad daylight,” despite evidence to the contrary.

When Dovere pointed out that Biden “has moved toward fewer restrictions (on abortion), not more,” Fiorina responded that it was a “great example of an opportunity to lead rather than just playing politics. He could do that. He could lead. He could problem-solve. He could find common ground on a bipartisan basis.”

In fact, there is no evidence that Biden wants to reduce abortions or find common ground with pro-lifers, and ample evidence to the contrary.

The presidential “healthcare” platform he unveiled last year calls for “codifying” Roe v. Wade in federal law; repealing the Hyde Amendment (which bars direct public funding of most abortions); forcing states to accept Medicare funding for Planned Parenthood, reversing the Mexico City Policy (which bars federal funds from supporting abortion overseas); and directing the Justice Department to “do everything in its power” to block state pro-life laws as modest as parental notification requirements, ultrasound laws, and waiting periods.

During his time in the Senate, Biden generally voted in lockstep with Planned Parenthood and NARAL. As former President Barack Obama’s running mate, he spent eight years in what was arguably the most pro-abortion administration in American history, during which he assured a Chinese audience he “fully understand(s)” and was “not second-guessing” their government’s practice of forcing families into abortion and sterilization.

In the early months of his presidential campaign, Biden formally jettisoned restrictions on federal funding of abortions by disavowing his support for the Hyde Amendment after just a day of pressure from pro-abortion activists. Most recently, he declared abortion to be “essential health care” that had to continue even as the COVID-19 emergency measures suspended many forms of actual health care.

None of the above has deterred Fiorina, however, who went so far as to declare that former running mate Cruz’s support for Trump “disappoints me.” She added that she hasn’t spoken with Cruz in “several years.”

While Trump’s opponents roundly cheered Fiorina’s announcement, she also received broad pushback from numerous voices, including a former campaign worker and the president himself:

Failed presidential candidate (thank you President Trump!), Carly Fiorina, said she will be voting for Corrupt Joe Biden. She lost so badly to me, twice in one campaign, that she should be voting for Joe. No complaints!!!

I regret ever working for this woman’s campaign. https://t.co/gEZ2M8M975

Now @CarlyFiorina. https://t.co/J9BEWNkLnj Republicans should remember all those who voted with the people tearing down statues of George Washington and General Grant. I know I will.

I distinctly remember when Carly — freshly having ditched California for Virginia — called around members of the RNC to solicit interest in her running for chair. She wasn’t an RNC member even �� Carly Fiorina Says She Will Vote for Joe Biden -The Atlantic https://t.co/MDXW0vSNq0

Curious…how does a Christian support any politician that is pro-abortion? #redlineissue #3000everyday

What’s your favorite part of the Democrat platform? Abortion on demand? Open borders? Massive confiscatory tax increases? Destruction of our energy sector? Dismantling the police? Rioting in the streets, looting or setting everything on fire?

You cant say you were ever really a conservative and now say you would even think about voting for Biden. So really you are just showing everyone you have no core values at all. Glad you never won election.

As for Cruz, he simply responded, “I very much respect Carly, but I disagree with her on this.”