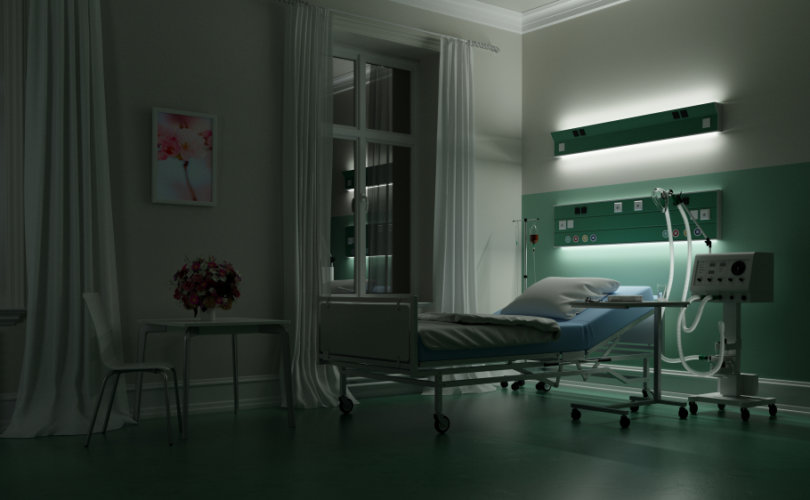 (LifeSiteNews) – As debate continues to rage over COVID-19 vaccines and the broader state of pandemic healthcare, sympathizers with the medical establishment have grown bolder in their advocacy of denying basic treatment to those who do not follow their preferred choices.

David Frum, a former speechwriter for President George W. Bush and American Enterprise Institute fellow and current MSNBC contributor and senior editor of The Atlantic, raised eyebrows over the weekend by suggesting that hospitals be allowed to “quietly triage emergency care” so that the “malignant minority” that declines the COVID shots for moral reservations and/or safety concerns is served “last”:

Seems the best option is

2) Impose vaccine mandates where it can be done;

3) Otherwise return to normal as fully as we can, especially the schools; and

Frum, who is far from the first prominent media figure to advocate such “triage,” elicited hundreds of disgusted replies from people horrified at the prospect of using the medical system to effectively punish people for disfavored choices, with potentially life-altering or life-ending consequences:

I wonder if this dude realizes that anyone who sees him drinking alcohol, smoking cigarettes or eating unhealthy food now, based on his principles of why unvaccinated people should receive care last has the right to say the same of him should he find himself with lung cancer. 🙄 https://t.co/5uMI2h6mcy

This entire thread rests on the assumption that the vaccine is both safe and effective. Both of which are provably false. They have moved the goal posts on both measures from the beginning. You are the victim of propaganda. https://t.co/Z77ebWXaPF

Referring to any segment of a society, no matter how much you may disagree with or disapprove of it, as a "malignant minority" is deeply, darkly, disturbing. It's chilling. Rhetoric like that nearly always portends commensurate action https://t.co/9FW7QfEado

On a less sarcastic note, if you think triage should follow moral worthiness of recipients, rather than severity of illness in the moment, you (1) don't know what medical triage is, and (2) are a moral ghoul. https://t.co/RUtpOSbObA

You want doctors, nurses, & other healthcare workers to punish—with potential death—people who choose not to get vaccinated.

Where does this end?

In response to his critics, Frum doubled down, claiming the choice to forgo COVID vaccination is directly responsible for other people’s delayed hospital care.

If, at this point, you are still unvaccinated, you are not a victim. You are a cause of the victimization of vulnerable others

The premise that self-vaccination reliably protects others rests on false assumptions about asymptomatic spread being a significant driver of COVID and disregard of natural immunity following COVID recovery, and flies in the face of data indicating widespread dissemination of the vaccines has failed to end the pandemic

Those who blame the unvaccinated for COVID’s persistence also ignore vaccinated individuals’ own role in continuing to spread the virus, between the shots’ limited efficacy and many Americans being given false expectations as to just how protective they really are, which in turn influences their behavior.

“Vaccinated people usually behave in a more risk-taking way, they have more contacts, go to concerts and parties more often,” says Dr. Günter Kampf, associate professor for hygiene and environmental medicine at the University Medicine Greifswald, Institute for Hygiene and Environmental Medicine in Germany. “They are no longer tested in Germany and are not quarantined. It is a carte blanche for an almost normal social life. If they become infected, they often have no or only mild symptoms and thus do not recognize their infection or recognize it too late. As a result, the expected wave among the vaccinated would hardly be visible.”

Frum and his allies also tend to disregard or oppose the potential of established therapeutics such as ivermectin to get COVID patients out of hospitals or prevent them from needing a hospital in the first place. In August, Frum suggested that interest in ivermectin as a COVID treatment was rooted in nothing more than psychological desperation:

The enduring question about the chloroquine/ivermectin stories is: why did so many seemingly intelligent and informed people so badly need to believe them? What psychological function did these stories fill? Crass partisanship was part of it, but not all of it.

Once a prominent figure in establishment Republican circles, Frum became a persistent critic of the GOP several years before the rise of former President Donald Trump and the corresponding rise of so-called “NeverTrump conservatives,” though Frum eventually became a staple of that group as well.

1
Catholic foundation attempts to save historic basilica up for sale due to clerical sex abuse
2
Moderna CEO: 30 million COVID jab doses will be tossed ‘because nobody wants them’
3
Canada ordered thousands of smallpox vaccines weeks before monkeypox ‘outbreak’
4
The message of Our Lady of Akita looms large amid increased risk of nuclear annihilation
5
Bp. Strickland bans Pelosi from Holy Communion until she ‘stops advocating the murder of children’
Subscribe to Daily Headlines »