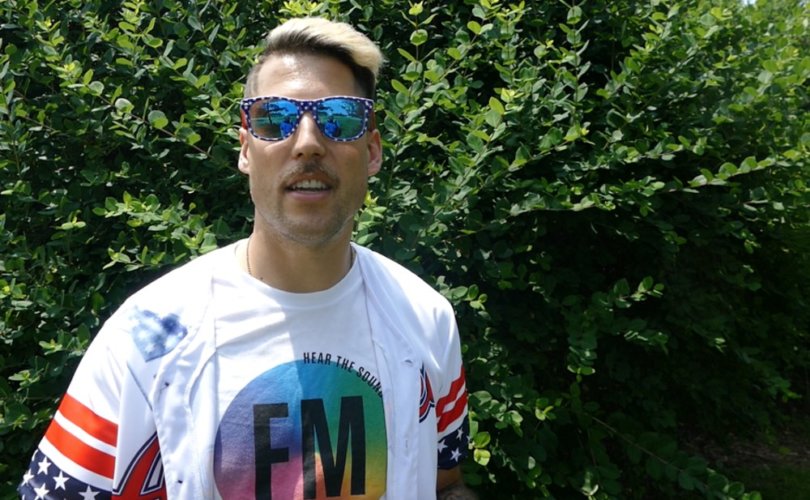 WASHINGTON, D.C., June 4, 2019 (LifeSiteNews) – Adonis Aurlelio Bemish traveled across the country from Seattle, Washington to Washington, D.C. to be part of last week’s Freedom March, adding his voice to the chorus of those who have been “set free from the LGBT lifestyle.”

To those who remain in the LGBT world who might accuse him of self-loathing, Bemish said, “I’m not denying who I really am because I was never that in the first place.”

“It’s not my Christian upbringing that convinced me that living a gay life is wrong because I definitely thought about it long and hard and considered it multiple times,” he said. “It’s been the Lord who has transformed me and has called me by my name” and “not by my struggles.”

“He’s given me identity, hope, and a purpose,” he added.

Bemish is so certain of the freedom he’s found in Christ to abandon his homosexual practices that before coming to the nation’s capital, he had the word “Freedom” inscribed into his haircut.

“I know I’m not alone, and to see all the lives transformed by Christ is proof enough for me that it’s not Christianity that’s calling people out of their gay lives, but it’s Christ alone,” he asserted.

The 31-year-old Bemish told LifeSiteNews that after attending last year’s Freedom March, he now sees “how much this movement has grown and how God is using it to impact the world.”

“God met me right where I was at,” said Bemish, whose life was transformed by the love of Christ five years ago.

Bemish, whose father died when he was nine years old, later struggled with alcohol and drugs while engaging in homosexuality. “For so long I had thought that I was just too far gone for God to love me,” he said, “or to even come back to God.”

“In my manhood, I was wounded,” said Bemish. “I didn’t know what being a man really meant [and] I didn’t even know who I really was.”

Bemish said that he’s not controlled by his flesh anymore.

“God is my strength; He is my rock,” and “I turn to Him when I struggle, versus turning to another man, turning to a form of relationship that never fulfilled me in the first place.”

As “Pride” month begins, Bemish was moved to recount on Facebook his path to true freedom in Christ.

Bemish said that as a young man he desired “to be ‘out’ because I thought it would bring some kind of freedom.”

“Although I may have struggled in silence, I acted on it very publicly and went out frequently to pursue hookups and the club scene thinking it would give me some purpose and I could truly be ‘who I was’ but it never satisfied,” he continued.

“People have called me self hating since starting to share my story of redemption in Christ and others have said I’m denying who I really am and telling me to just be gay and proud about it,” he added. “I’ve been told because of my Christian upbringing that this is the reason I can’t find happiness in pursuing the gay lifestyle. Because I’ve never fully let go of my church upbringing that I can’t ‘break free’ from that belief system.”

“I can honestly say though in all my searching and grasping, trying to find identity seeking relationships with…the same sex has never brought me anything but more confusion and self loathing,” said Bemish.

“I remember as a kid when I was made fun of so much for my feminine mannerisms or just being called gay and faggot,” recalled Bemish. “Before I even knew what these names meant I was branded.”

“I hated who I saw in the mirror so much that I literally stopped looking in the mirror because I thought I was ugly and worthless [and] no one could love me or want to love me. I struggled with suicidal thoughts and tendencies.”

“I thought as I grew older if only I could be attractive and wanted by the same sex, that would bring me fulfillment and acceptance. I learned very quickly in gay culture that even if you were the most attractive or in shape there was always someone else more attractive or in better shape and was desired more than you. You were never fully and truly accepted in the culture because you were always labeled and had to fall into some category to be acceptable and only in that category could you be accepted.”

“I experienced more rejection and self hatred trying to live that life,” explained Bemish. “I was desiring relationship and love from this community that said they accepted everyone and still found none. I felt like I was always looking for something more and never finding satisfaction, but for maybe a moment. I became more and more depressed as I got deeper into it and as I questioned myself and God for making me the way I thought He had. I would yell and scream at God for making me go through so much pain and anguish from losing my Dad to making me have such an awful cross to bear.”

“I couldn’t love myself because I was convinced that I was unlovable,” noted Bemish. “But God in His still small voice began speaking through these things most of the time when I was drunk out of my mind. I could sense Him calling me back.”

Bemish said that he would wander off a lot at parties “when super wasted and find myself crouched down in the woods or a corner somewhere crying out to Him and asking Him to help me to do something in my life. I felt condemned already though for living the life I had lived. That I had gone too far down this road to come back, but yet He still pursued me.”

“To see and know all the many others who’ve left [behind] the LGBT lives they were leading to pursue God…has been so amazingly encouraging to me. It has given me so much hope and knowing where my life once was and where it is now is simply amazing and so satisfying.”

“He’s meeting us all exactly where we’re at and calling us each by our names,” concluded Bemish. “He has so much planned for us and it’s amazing to see who God is raising up in this generation for such a time as this!”