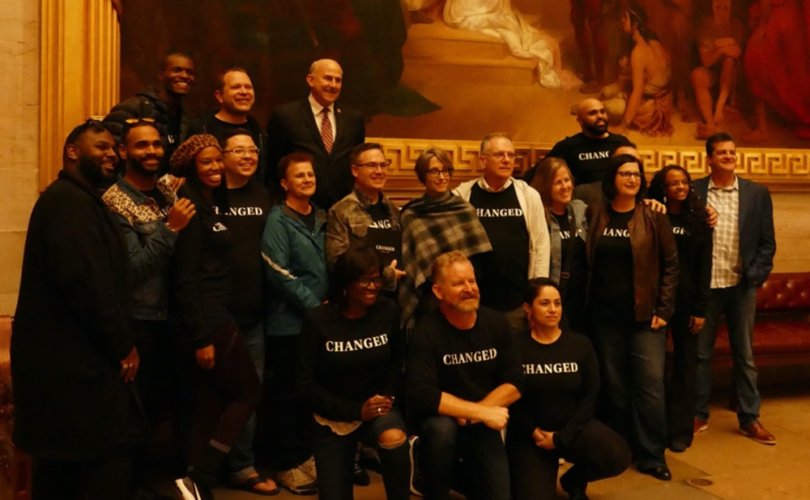 WASHINGTON, D.C., November 1, 2019 (LifeSiteNews) — An extraordinary event took place beneath the magnificent rotunda of the United States Capitol Wednesday night: Former gay, lesbian, and transgender men and women repented and interceded on behalf the nation for the sins of homosexuality and transgenderism.

They were part of a group which came to Washington this week to urge members of Congress to oppose the so-called “Equality Act” and “Therapeutic Fraud Prevention Act” that would prevent others from seeking help to escape LGBT lives.

Moments before their entering the rotunda, NBC had published a story with a headline declaring that the group had come to D.C. “to lobby against LGBTQ rights,” yet that is not their purpose at all. They came to tell their stories of finding healing and fulfillment by rejecting the lies of LGBT ideology and turning to Christ.

“I repent for the lies that we have believed as far as who we are,” prayed a woman who had lived as a “man” for many years, but is now restored to her true identity. “Lord, we bought into the lie that you didn’t create us good enough. That we should have been something else.”

No other fount we know
Nothing but the Blood of Jesus.

The hour-long spontaneous prayer erupted at the end of a tour of the historic building led by U.S. House members Doug LaMalfa, R-CA, and Louie Gohmert, R-TX, pro-life champions and defenders of religious liberty.