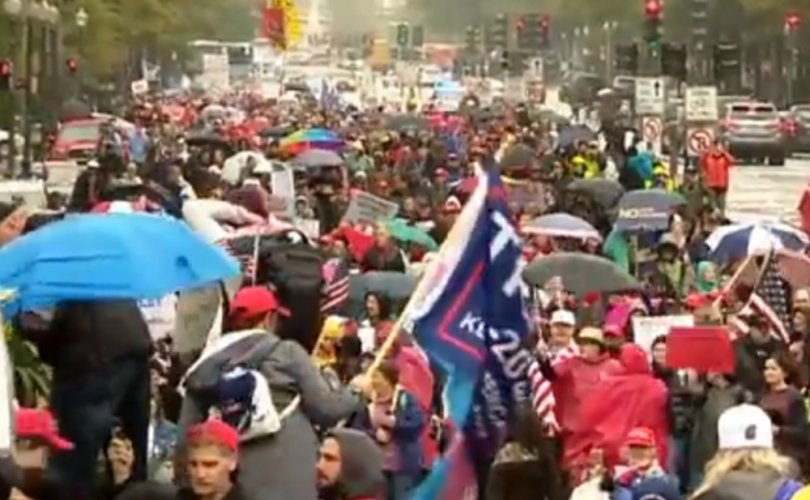 WASHINGTON, D.C., October 30, 2018 (LifeSiteNews) – Thousands of formerly liberal Americans descended on the District of Columbia Saturday to take part in the #WalkAway Campaign’s first march on Washington to declare their independence from the Democrat Party.

Launched earlier this year by New York actor and hair stylist Brandon Straka, a homosexual man who describes himself as a “former liberal,” the #WalkAway Campaign argues that the modern Left, and the party with which it aligns, have abandoned principles such as tolerance, equality, and open discussion that attracted people there in the first place.

The campaign’s primary means of promoting its message has been via written and video testimonials from former Democrats of various backgrounds explaining their political evolutions. In a little over a month it attracted tens of thousands of Facebook, Twitter, and YouTube followers, with the October 27 march meant to be its biggest statement yet.

After a dinner at the Trump International Hotel the night before, the campaign had marchers gather at John Marshall Memorial Park on Saturday morning. They then marched approximately one mile along Pennsylvania Avenue to Freedom Plaza. There, a speaking lineup of political personalities as well as ex-liberals addressed the crowd.

As the movement gained steam “the liberal media tried to steal the voices of Americans once again” by dismissing it as a social media trend exaggerated by stock photos and Russian bots, Straka said in a message announcing the march. “Well, it’s time for the silent majority to become unsilent […] we are walking away from the lies, the hate, and the vandalism. We are walking away from the vitriol, the name-calling, the censorship, the fake news.”

Telling the crowd they were walking away from the “plantation” mentality of the Democrat Party, D’Souza advised the movement that its initial jubilation and political demonstrating were just part of a broader cultural fight.

“We won’t compete effectively long-term if we don’t break the Left’s virtual monopoly on elite academia, on mainstream media,” he warned. “And we have to use our influence, in the end, to transform the whole conservative movement and the Republican party.”

More than 5,000 people participated in the event, the Washington Times reports. Straka shared several pictures indicating the size of the turnout, while others on social media lamented that the mainstream media was unlikely to either cover them or compare their conduct to that of left-wing protesters.

DC Police estimated more than 5K at the first ever #WalkAwayMarch!! Folks came out in the rain and cold to #WalkAway and #WalkWith. Our March spanned 7 city blocks.
Incredible day yesterday!!! The first of many #WalkAway events!! pic.twitter.com/Ft5gAxwhY9

But neither will you see any (honest) shots from CNN/Fake Stream Media of waste left behind in the wake of the #WalkAway marchers. 15 minutes after the hours-long rally ended, I walked by to see the damage. There was none. The #WalkAways left Freedom Plaza immaculate.

The President of the United States, himself a former liberal who many conservatives now see as their champion, even gave Straka and the #WalkAway March a shout-out on social media:

Democrats have drifted further to the left over the past several years, from championing effectively unlimited abortion to Democrat National Committee chair Tom Perez hailing openly-socialist candidates as “the future of our party.”

Most recently, a growing number of prominent Democrats including Hillary Clinton, Sen. Cory Booker, ex-Attorney General Eric Holder, and Rep. Maxine Waters have called on their supporters to personally confront Republicans and treat them with varying degrees of open hostility.