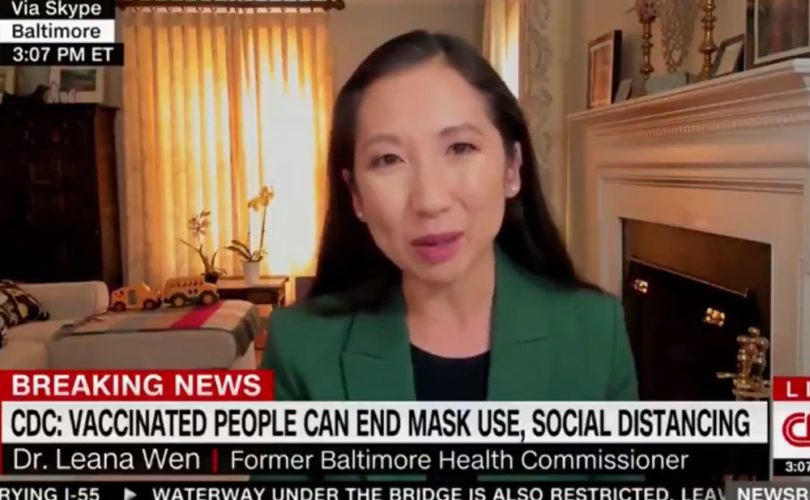 (LifeSiteNews) – Former Planned Parenthood president Leana Wen is continuing to dissent from COVID-19 orthodoxy despite bitter condemnation from her former left-wing allies, publishing Tuesday a Washington Post article explaining why she will not mask her children when sending them to school.

Wen, a former Baltimore health commissioner whom Planned Parenthood fired in 2019 after less than a year leading the abortion giant, has advocated various restrictive measures in response to the COVID-19 outbreak, including vaccine mandates and passports. But recently she has begun to soften on some of those measures, prompting outrage from fellow leftists.

As detailed recently by Dr. Robert Malone, more than 600 left-wing health practitioners, academics, and students have signed a petition demanding that Wen be disinvited from speaking at the 2022 American Public Health Association (APHA) Annual Meeting, based in large part on her latest COVID opinions, and replaced “with someone whose work is consistent with anti-racist, anti-eugenicist public health practices and community health.”

Wen is so far standing by her calls for a less restrictive COVID regime. In the Post, she argues that the Omicron variant of the virus is “is so contagious — with its derivative strains such as BA.5 even more so — that preventing covid-19 became nearly impossible,” which necessitated “dramatically” rethinking the “benefit-risk calculus of mitigation measures.”

“I was willing to limit my children’s activities for a year or two but not for their entire childhood,” wrote Wen, who vaccinated her children for COVID (despite the shots being unnecessary and potentially harmful, especially to young people).

“It helped, too, that omicron is milder than previous variants,” she noted. “”The likelihood of severe outcomes, including the feared multisystem inflammatory syndrome in children, is much lower now than it was during the delta or alpha surges. The odds of developing long covid are also lower with omicron compared with previous strains. Vaccination, while less protective against symptomatic disease due to omicron, continues to provide excellent protection against severe illness” (the notion that this protection outweighs the risks remains questionable).

“I accept the risk that my kids will probably contract covid-19 this school year, just as they could contract the flu, respiratory syncytial virus and other contagious diseases,” Wen wrote. “As for most Americans, covid in our family will almost certainly be mild; and, like most Americans, we’ve made the decision that following precautions strict enough to prevent the highly contagious BA.5 will be very challenging. Masking has harmed our son’s language development, and limiting both kids’ extracurriculars and social interactions would negatively affect their childhood and hinder my and my husband’s ability to work.”

Despite her continued support for the controversial COVID shots, Wen’s rejection of masking and extreme COVID restrictions reflects increasing public awareness and consensus of how the public health establishment’s favored policies actually performed.

Evidence indicates that masks, for instance, were not only ineffective at containing the virus but actually resulted in a variety of harms, especially for children.

“The potential educational harms of mandatory-masking policies are much more firmly established, at least at this point, than their possible benefits in stopping the spread of COVID-19 in schools,” University of California-San Francisco epidemiologist professor Vinay Prasad wrote in September 2021. “Early childhood is a crucial period when humans develop cultural, language, and social skills, including the ability to detect emotion on other people’s faces. Social interactions with friends, parents, and caregivers are integral to fostering children’s growth and well-being.”

Last year, the American Academy of Pediatrics (AAP) came under fire for removing from its website an acknowledgment of this consensus after coming out in favor of forced masking of children as young as two.

“By the time babies are 6 to 8 weeks old, they may smile back when they see a face,” read the since-deleted Face Time and Emotional Health brochure. “These ‘social smiles’ are both fun and important. Make time for ‘face time’! That means taking time to smile at your baby’s face and to return a smile whenever your baby smiles.”

“If your child learns early in life that he can easily get your attention by smiling or cooing or being happy, he will keep it up,” it added. “But if you do not make time for face time, he may give up on smiling and try more fussing, crying and screaming to get the attention he needs.”

Similarly, reviews found that the lockdowns favored by more liberal states were either ineffective at saving lives, or what benefit they offered was outweighed by associated harms.

In April, the fiscally-conservative Committee to Unleash Prosperity (CUP) ranked all 50 states on the equally-weighted metrics of health, economic, and educational outcomes. They gave 18 states an A or B grade. Of those, 16 were led by Republican governors, including the top six performers: Utah, Nebraska, Vermont, Montana, South Dakota, and Florida. By contrast, the six states and jurisdictions to receive an F grade are all led by Democrats: Illinois, California, New Mexico, New York, the District of Columbia, and New Jersey.