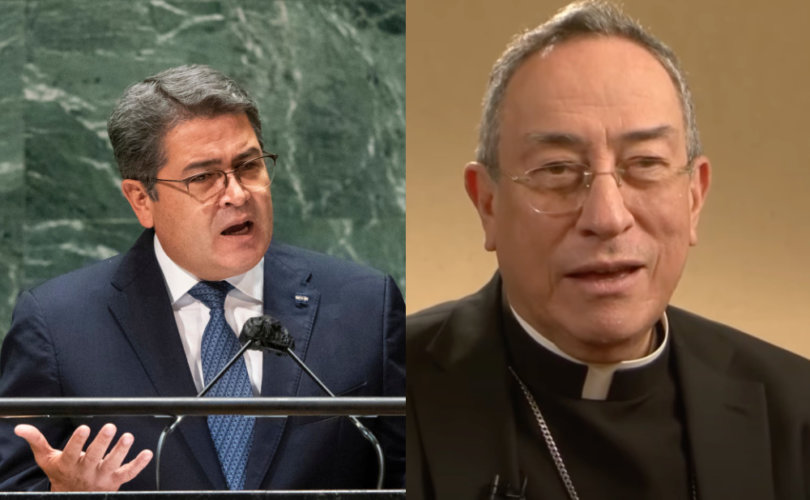 TEGUCIGALPA, Honduras (LifeSiteNews) – The former president of Honduras, who is closely linked to an intimate confidante of Pope Francis, Cardinal Óscar Andrés Rodríguez Maradiaga, has been charged by U.S. officials with drug smuggling, in an event which is being linked to Maradiaga’s own resignation.

Juan Orlando Hernández, the former president of Honduras from 2014 through 2022, was extradited to the U.S. on April 21, having been charged with drug trafficking and arms smuggling. In a press release, the U.S. Department of Justice (DOJ) stated:

… from at least in or about 2004, up to and including in or about 2022, Hernández, the former two-term President of Honduras, participated in a corrupt and violent drug-trafficking conspiracy to facilitate the importation of hundreds of thousands of kilograms of cocaine into the United States. Hernández allegedly received millions of dollars to use his public office, law enforcement, and the military to support drug-trafficking organizations in Honduras, Mexico, and elsewhere.

Charges laid against Hernández include protecting “some of the largest drug traffickers in the world,” such as his brother, who is already serving life imprisonment for drug trafficking, as well as sanctioning “brutal violence.”

The 53-year-old politician served as president of the Honduran National Congress from January 2010 through 2014, at which point he was elected president in a disputed election and served two terms until January 2022.

His arrest and indictment by U.S. authorities is now being linked to the recent resignation announcement made by Honduras’ Archbishop of Tegucigalpa, Cardinal Óscar Andrés Rodríguez Maradiaga, by a former close friend of the cardinal.

Cardinal Maradiaga is a key figure in the Vatican, leading Pope Francis’ C9 Council of Cardinals, and has been dubbed the “vice-pope” due to his close relationship with Francis.

Maradiaga is also described as being a “friend and accomplice” of Hernández by Martha Alegría Reichmann, the widow of Honduras’ former ambassador to the Holy See, Alejandro Valladares. Both Reichmann and Valladares were close friends of Maradiaga for years.

Maradiaga: The politician Cardinal of Honduras

Reichmann and her late husband Valladares were friends of Maradiaga for many decades, even hosting him in their home, with Valladares’ lobbying reportedly being crucial to Maradiaga becoming the first Honduran cardinal. However, Maradiaga subsequently “betrayed” them, lost their life savings in his investment schemes, and ignored their subsequent petitions for help.

Reichmann details these events in her recently translated book Sacred Betrayals: A Widow Raises Her Voice Against the Corruption of the Francis Papacy, in which she reveals evidence that Cardinal Maradiaga covered up the sexual abuse and misconduct of his auxiliary bishop, Juan José Pineda Fasquelle, and diverted millions of dollars of Church money to fraudulent investment schemes that have since disappeared.

Maradiaga, aged 79, had his mandatory resignation refused by Pope Francis when aged 75, even though he has been beset with reports of financial and sexual cover-up scandals for a number of years, for which he has still refused to answer.

Now, in a essay published on the website of Vatican journalist Marco Tossatti, Reichmann highlighted Maradiaga’s recent resubmission of his resignation to Pope Francis, and linked it to Hernández’s arrest.

She wrote first on Maradiaga’s historical involvement in Honduras’ politics:

Rodríguez Maradiaga was visibly colluded with that regime that turned Honduras into a ‘narco state.’ As president of the Episcopal Conference, he signed a letter supporting the 2009 coup. Then in Rome he denied his support, perhaps because the regime was repudiated by the international community and Rodríguez had aspirations to the papacy.

Maradiaga does indeed have a history of entwining himself in Honduras’ political affairs. A July 2009 report by the Guardian described Maradiaga as “at odds with the present regime [President Zelaya] over their enthusiasm for a free trade agreement with the US.”

He then supported the 2009 military-led coup which saw President Manuel Zelaya ousted from power and replaced by the Speaker of Congress as an interim president. The U.N., the E.U., and much of the Western Hemisphere condemned the coup, but – as noted by Reichmann – Maradiaga vocally supported it.

A 2011 report by humanitarian group Refugee Transitions noted how Maradiaga was a key figure in supporting the coup: “The Honduran Business Council, the Civic Democratic Union, the Honduran Catholic Church, (led by Cardinal Oscar Maradiaga Rodriguez), the media and other international interests also supported it.”

“Cardinal Oscar Maradiaga Rodriguez appeared on television and radio telling Zelaya not to return, warning there would be bloodshed if he did,” noted the report.

Zelaya himself, speaking after he was ousted, declared that Maradiaga “conspired with the coup leaders. He betrayed the people, the poor. He took off his robes to put on a military uniform. And with his words, he really contributed to the assassinations that have taken place in Honduras.”

Maradiaga, Hernandez both accused of financial misconduct in the millions

Among the charges raised by the DOJ against Hernández, the former president was accused of “allegedly received millions of dollars to use his public office, law enforcement, and the military to support drug-trafficking organizations in Honduras, Mexico, and elsewhere.”

A similar theme of amassing riches is found in Maradiaga’s personal life, as reports have already highlighted suspected financial misconduct on the part of Maradiaga, particularly in Honduran local press and media. Reichmann, referring to research undertaken by journalist Emiliano Fittipaldi, suggested that Maradiaga had already personally amassed over 130 million lempiras (around $5,297,110) by 2016 alone.

Martha Reichmann, having already noted how Maradiaga “visibly colluded with that regime that turned Honduras into a ‘narco state’,” suggested that the arrest of Hernández thus necessitated the departure of Maradiaga.

Cardinal Maradiaga has announced his retirement at the precise moment when the former president, Juan Orlando Hernández, is extradited to the United States to be tried for drug trafficking and other crimes committed during a dictatorship marked by absolute corruption and full of outrages against the citizens….

Now Rodríguez Maradiaga takes his leave, openly repudiated by his people who blame him for leaving just when, after twelve years of dictatorial rule, his friend and accomplice Juan Orlando Hernández is leaving and therefore remains without protection.

The people accuse him with harsh epithets: corrupt, dishonest, traitor. All on the basis of evidence showing that for twenty years he protected the terrible immoral network, including financially, directed by former bishop Juan José Pineda, and also for hiding the Costa Rican priest Enrique Vasquez, who arrived in Honduras fleeing Costa Rican justice for raping children.

However, Cardinal Maradiaga still enjoys the strong support and protection of Pope Francis, who elevated the Honduran cardinal to lead the papal advisory council of cardinals only weeks after Francis ascended to the papacy.

Speaking with the National Catholic Register in 2019, Reichmann said that Maradiaga “is very powerful because he has the absolute support of someone much more powerful, who is Pope Francis.” She added this is why it’s been easy for him to dismiss accusations as “slanders” or those accusing him as “attacking” him “so as to attack the Pope.”