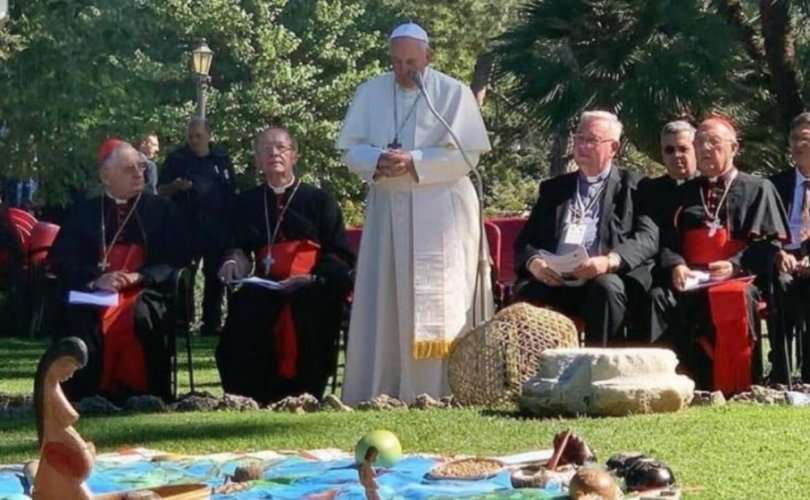 VATICAN CITY, October 11, 2019 (LifeSiteNews) ― The American grandson of an indigenous ex-shaman was appalled when he saw a video of an Amazonian religious ceremony that took place in the Vatican this week.

“I saw the ceremony that was performed in the Vatican garden and couldn't believe my eyes,” Rexcrisanto Delson told LifeSiteNews.

“There were idols, and even a Franciscan participated,” he continued.

“I later learned that an Amazon tribal leader confirmed it was purely pagan. Did the Catholics who participated and supported such a vile act not know it was pagan?”

Delson said that even if they didn’t know then, they should know now.

“There's no excuse from here on out to claim they didn't know they were violating the first commandment,” he said, and quoted Psalm 95:5 in saying that “all the gods of the Gentiles are devils.”

The Vatican ceremony reminded Delson, who has Igorot ancestry, of a slip in his own past when he “unknowingly participated” in a pagan Igorot religious ceremony.

“I [thought] it was the harmless playing of our gangsas (hand held musical gongs) before we prepared a native dish of slaughtered chickens,” he said.

“Prayers were said by an Igorot shaman, who was from a different Igorot tribe. I learned from him later that he actually summoned deities,” he continued.

“I later went to Confession and never did that again. When I reflect on that and the things I learned from the exorcist Fr. Chad Ripperger about opening doors for the demonic when we sin, I become angry to see this being allowed in the Vatican.”

The Igorot tribes are from the highlands of the Philippines. Delson said that indigenous tribes in the Amazon should be given the same catechesis offered to the Igorot by a certain Polish saint.

“I wish the indigenous people of the Amazon could hear something similar to what the indigenous Igorots heard from Pope John Paul II when he visited the Phillipine Cordillera mountains in 1981,” Delson said.

“After mentioning each tribe, he expressed praise, appreciation, and compassion for our culture, he ended with ‘Yet in all this, the Church never forgets the primacy of her spiritual mission, remembering that her ultimate goal is to lead all men and women to eternal salvation in Christ’,” Delson recalled.

Reflecting on the Vatican garden ceremony, he concluded: ““This Synod's message is contrary to Pope John Paul's message then. Instead of leading the indigenous to salvation, the opposite seems to be taking place.”

Delson was infuriated by an Austrian-born Brazilian bishop’s belief that the indigenous people of the Amazon are incapable of understanding or receiving a celibate priestly vocation.

“I just heard what Bishop Kräutler said about the indigenous people not understanding celibacy,” he told LifeSiteNews.

I find it very offensive as an indigenous person. I even find it very racist. These people who believe such things seem to have forgotten the role of missionaries as understood in the past when the primary purpose and goal was to convert and baptize people – to save their souls.

This Bishop fails to understand that the indigenous do not understand celibacy because their intellect has not been fed the Truth of our Catholic faith. Of course they may struggle with the idea of a man not having a wife because this is foreign to them. They aren't the first who thought this.

I'm sure when the Belgium priests and missionaries began evangelizing my pagan Igorot ancestors, they too were wondering why these men did not have a wife. To them, it isn't natural. That is precisely why they needed to be taught the “supernatural” of our Catholic faith. How can one's will lead to the priesthood if one's intellect has not been properly been fed the Truth? It can't. This is why the Church needs to focus on elevating the intellect of the indigenous instead of lowering Herself to their pagan beliefs and practices.

My pagan ancestors were rooted in the natural law and rich in spiritualism, which made them fertile soil for the seed of our Catholic Faith to grow and flourish. Once they were properly catechized, it was clear to them that head hunting and their worship of false gods were wrong. After learning about the priesthood and the significance of a priest as persona Christi, they grasped the Truth about celibacy.

Delson’s own grandfather was a pagan shaman, and Delson told LifeSiteNews that his Catholic mother, the shaman’s daughter, was so worried about her father’s soul that she took it upon herself to convert him to the Catholic faith.

“This is what is absent from the Amazon Synod – a real concern for the souls of the indigenous,” Delson declared.

“Countless of Igorots, when presented and taught the Truth had enough intelligence to follow it and became baptized Christians because man is ordered towards the good,” he continued.

“The indigenous people of the Amazon also have the intellect and are fertile soil for the Truth. They are not stupid. They just need to be taught the Truth.”

Delson said that as an indigenous person from the Philippines he can’t speak directly for the indigenous tribes of the Amazon, but he does resent them being used as an excuse “to promote an agenda for married priests.”

“Again, it boils down to proper catechism, which is sadly lacking today,” he declared.

“Man is ordered towards good and that all my ancestors needed was the Catholic Faith to enlighten the natural their reason which is grounded in the natural law.  The Synod is making the grave mistake of falling away from the evangelization that led to many conversions of Igorots and other indigenous people in the past.”