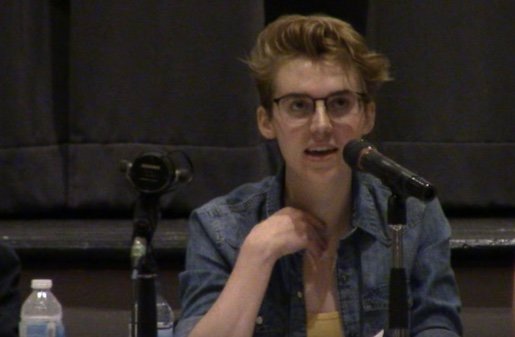 VANCOUVER, British Columbia, July 31, 2019 (LifeSiteNews) ― A young feminist who identified in her teens as “non-binary” and as a “trans man” believes that social media is a driving force in convincing unhappy children that they should reject their bodies.

Dagny, 22, gave a presentation to the “#GIDYVR: Gender Identity and Kids” conference in May. She described how she turned to her computer for help when she struggled with puberty.

“I did have early instances of what would now be called gender dysphoria in my childhood. At 11 or 12, I felt incredibly humiliated by the fact that my breasts were growing, and that I would have to start wearing bras,” she said.

“My period was a source of angst and hatred from the moment I first started menstruating. (…)  I thought there was something wrong with me for feeling that way,” she continued.

“And maybe most predictive, I had a Yahoo answers account, and when I was in grade seven, I made a post with a title that was something like, ‘I’m a 12-year-old girl but I want to be a boy.’ I remember that the answers were mostly dismissive, but there were a few that instructed me, a 12-year-old, to look into transsexual surgeries.”

Dagny said her gender dysphoria “exploded” when she was 15, and she believes this was when she began to identify as “trans.” This new identity was influenced by friends and social media.

“Like so many other trans teenagers, I first started courting my own trans identity because of two factors in my life: One, I had trans friends — two of them, both older than me, both female-to-male (FTM), like me, and two, I had a sharp increase in my social media use,” she revealed.

“I was never very active on social media before I turned 15, but within months of creating an account on Tumblr and following several LGBTQ resource blogs, I had decided that I was non-binary.”

Later, she decided she was a “trans man.”

The first place she tried on this “fun distraction” of a new identity was the internet, and Dagny stressed that social media has a serious impact on the teenage brain.

“The first place I tried on this new identity — a trans man — was online,” she said.

“And I just want to say that I think that it’s incredibly important for everyone — parents, yes, but also teenagers and therapists and lawmakers — to understand what kind of impact social media can have on a developing mind,” she continued.

“I, in essence, became a different person after I started using tumblr. It’s an unhealthy, upsetting, and toxic environment to even observe, let alone participate in, as a teenager.”

On social media, Dagny found herself caught in a serious level of “group think,” “moral policing” and “implicit threats of social exposure and ostracization.” She became withdrawn, anxious and paranoid. Indoctrinated by “Tumblr,” she thought her parents were bigots because they wouldn’t allow her to start hormone therapy. She also earmarked anyone who “misgendered” her was an enemy, and she hated anyone who called her “she.”

“Tumblr’s version of morality and justice made me — an impressionable, insecure teenager — feel like my only safe place was in my head, where I would never be misgendered,” she said.

“I didn’t feel safe online either, but I couldn’t allow myself to critique my online peers. Even though I had learned all these unhealthy beliefs and behaviors from them, they had also taught me that they held the moral high ground. So I adopted and parroted Tumblr’s ideals, and my identity was unconditionally validated.”

Dagny also believed that because she was trans, she was morally obligated to “transition,” and any hesitation on her part was down to internalized transphobia. This is why she believes it so important today that children with gender dysphoria hear the testimony of those who “detransition.”

“We’ve been absolutely inundated with one narrative, one option, one story, since this issue hit the mainstream,” she said.

“We’ve been given only one option, at the risk of unspeakable, devastating consequences: if a teen says she has gender dysphoria and wants to be a boy, then she should — must — be allowed to transition,” she continued.

Dagny revealed that she still has gender dysphoria ― few days go by in which she doesn’t wish she was a man ― but that she feels much better than she did when she was 16. She no longer wishes to “transition,” and is distressed that other young people with gender dysphoria think they have no other choice.

“It’s time to change that,” she said.

“It’s time that we become aware of how much pain and negativity this narrative is causing,” she continued.

Fortunately, there is a silver lining to social media cloud. Thanks to Dagny’s online Pique Resilience Project, in which she partners with three other young women who have also “detransitioned,” at least two children have decided not to attempt to change their gender.

“The PRP has received at least two messages from parents telling us that after watching videos about detransitioning, their teenagers decided that they have Rapid Onset Gender Dysphoria and that they would not transition. They realized that pursuing different options was a better solution for them and their experience,” she said.

Another source of information for parents of children suffering from Rapid Onset Gender Dysphoria is the 4thWaveNow online community.

Ironically, Dagny, who has a female partner, would not be overly pleased with this LifeSiteNews article, as the fact that only socially conservative newspapers pay attention to stories like hers troubles her.

“We’ve unfortunately been profiled numerous times on far-right Christian journals, and not once, to date, on mainstream, leftist news media, which I find interesting, given the amount of coverage trans issues have received these last five years,” she said.

“I think that this indicates a fear of straying from the path — a fear of saying something, even if true, that goes against the grain.”