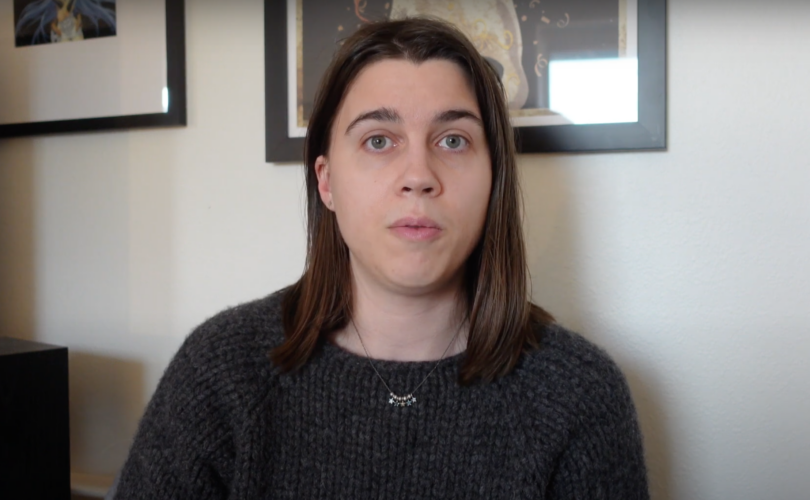 PORTLAND, Oregon (LifeSiteNews) — An Oregon woman who once lived as “non-binary” has filed a lawsuit against several of the medical professionals responsible for the removal her breasts.

The lawsuit is just the latest example of how formerly gender-confused individuals have come to regret having gender-based surgeries or taking drugs in an aim to represent the opposite sex, or one of the many so-called genders pushed by LGBT activists.

Camille Kiefel “is suing the two counselors who signed off on her double mastectomy surgery to affirm a ‘non-binary gender identity,'” according to a summary of the lawsuit posted by Women’s Liberation Front, a feminist group that is helping funding the litigation. Her medical providers approved the request after two short online meetings.

Camille endured trauma as a young girl as well as physical and mental health challenges through her teens and twenties. Not long after a painful surgery that has left her without breasts and suffering many complications, Camille realized that identifying as ‘non-binary’ and hating her body were trauma responses and attempts to escape the burdens of being a woman.

Kiefel’s lawsuit, filed as a civil action in Oregon, accuses the medical professionals of “breach of the duty of care that mental health professionals owe to an individual client; intentional infliction of emotional distress; and fraud,” according to the Liberation Front summary

“The complaint calls for a jury trial and seeks up to $850,000 in damages, alleging the defendants ‘abused their positions of professional trust and authority with intent to cause, or with reckless disregard,’ caused Kiefel to ‘suffer extreme, excruciating, severe emotional distress,'” according to The Daily Wire, which reviewed the complaint.

Notably, Ruff, a licensed clinical social worker, “does not offer counseling services,” according to the Brave Space website. Rather, Ruff will write a “letter of support” or conduct a “medical assessment,” which is often needed before surgeons will carve up someone for a supposed transgender surgery.

LifeSiteNews contacted Brave Space on Tuesday morning but did not receive a request for comment on the lawsuit.

Burmeister is a mental health counselor, according to a website that tracks medical provider registration. LifeSiteNews contacted Burmeister’s clinic, Quest Center, on Tuesday via email, but did not receive a response.

Kiefel is represented by the law firm of Jackson Bone LLP, a legal group set up by former Donald Trump administration official Candice Jackson. A full version of the lawsuit is not yet available to the public, according to the law firm.

Jackson, a lesbian, oversaw the implementation of Title IX, which prohibits discrimination on the basis of sex, as an appointee in the Department of Education.

“When I transitioned, I truly believed I was non-binary,” Kiefel wrote on Twitter. “Now I know I was struggling with mental illness and trauma around womanhood. If I could make that mistake as an adult, a child could, too.”

When I transitioned, I truly believed I was non-binary.

Now I know I was struggling with mental illness and trauma around womanhood.

If I could make that mistake as an adult, a child could, too.

Kiefel’s story adds to a growing body of evidence about the harms from transgender drugs and surgeries.

“I’ve made a lot of mistakes in my life. But none have impacted me so indelibly, or caused as profound regret, as my 2017 decision to transition FTM: female-to-male,” a woman named Grace wrote. “As I write this, the mastectomy scars are twinging on my chest. 4 years later, I’ve grown older, wiser, and way more cautious. But the scars remain.”

Medical professionals, in the United States and abroad, have also raised concerns about transgender drugs and surgeries.