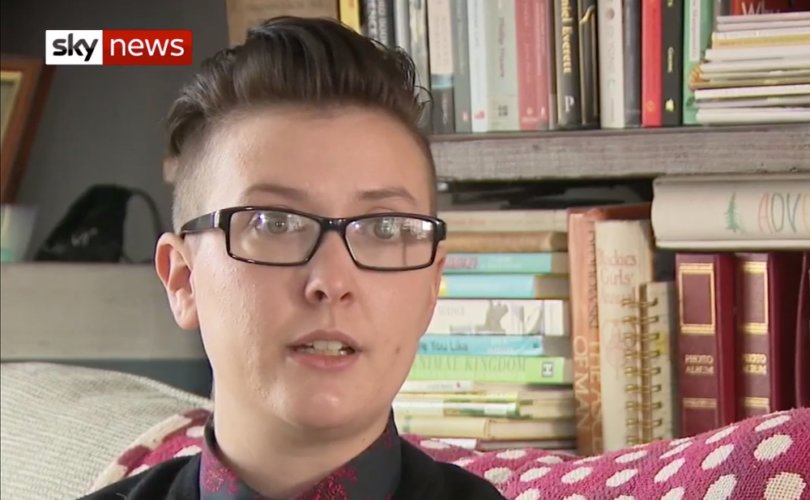 UNITED KINGDOM, October 7, 2019 (LifeSiteNews) — A young woman who has rejected her former transgender identity as a male has launched a group called “The Detransition Advocacy Network” in order to help the hundreds of young individuals she says have reached out to her after experiencing regret after undergoing hormonal treatements and surgical procedures.

“I'm in communication with 19 and 20-year-olds who have had full gender reassignment surgery who wish they hadn't, and their dysphoria hasn't been relieved, they don't feel better for it,” Charlie Evans told Sky News. “They don't know what their options are now.”

Evans, age 28, who “detransitioned” after having identified as a male for 10 years, said she has been stunned by the sheer number of people who have reached out to her after she went public with her story last year.

While mainstream media frequently report stories about young people and even toddlers beginning a journey to medically “transtion” to the oposite sex, the growing numbers of those who later experience deep regret is unknown because their stories are suppressed and sociologists – fearful of the backlash they might reap from from the world of academia – have yet to conduct any meaningful research into this burgeoning phenomena.

Evans explained that she was motivated to start the new group when a young girl sporting a beard approached her after she had given a speech, and told her that she too had “detransitioned.”

“She said she felt shunned by the LGBT community for being a traitor. So I felt I had to do something,” said Evans.

Sky News interviewed “Ruby,” age 21, one of the young people who had reached out to Evans for help.

After having taken testosterone, her body had undergone significant changes, including a lower voice and growing facial hair. Although she had planned to have her breasts surgically removed this summer, she began to experience doubts.

“I didn’t think any change was going to be enough in the end and I thought it was better to work on changing how I felt about myself, than changing my body,” Ruby told Sky News.

Ruby said she realized that doctors and therapists had neglected to take into account her pre-existing eating disorder, which she felt probably played a role in triggering her desire to “transition.”

“When I was at my gender clinic to get referred for hormones, we had a session where I went over my mental health issues and I told them about my eating disorder and they didn't suggest that that could [maybe be] connected with my gender dysphoria,” she said.

“For everyone who has gender dysphoria, whether they are trans or not, I want there to be more options for us because I think there is a system of saying, ‘okay here's your hormones, here's your surgery, off you go,’” she explained to Sky News.

“I don't think that's helpful for anyone,” she added.

Former transgender: ‘Regret’ and ‘detransitioning’ are the new trans frontier

Charlie Evans and “Ruby” attest to what activist Walt Heyer has been explaining for many years. Heyer is a former transgender who runs a global outreach to those who experience sex change regret.

“The science of surgical interventions is not yet settled regarding the long term consequences of transgender therapy,” noted Heyer at a 2017 Symposium at the University of Hong Kong. “As of today, we don’t have any objective, conclusive research.”

“I feel ‘regret’ and ‘detransitioning’ will become the next transgender frontier,” said Heyer. “So be prepared.”

“There is an ever-increasing number of former transgenders, like myself, who are now requesting gender reversals,” he said.

“As a former ‘female’ transgender, I can see the exploding social trend that has developed into a significant transgender contagion – now even an epidemic – that has captivated yong children as well as young adults who have come to believe they’re the opposite sex on just the weight of social media and feelings … in some cases taking drastic measures to change their bodies,” said Heyer.

“More and more, I get reports from families telling me that their teen children suddenly came out as a transgender without any prior history of discomfort with their biological sex,” said Heyer, describing what has come to be called “rapid onset gender dysphoria.”

Heyer explained that many surgically transformed men and women suffer from a complex number of sexual, emotional, psychiatric, and psychological comorbid disorders, such as autogynephilia, dissociative disorders like schizophrenia, body dysmorphic disorder, and a host of other undiagnosed disorders that were not resolved by the recommended therapy of changing genders.

Heyer, speaking from his own experience, explained that if such disorders were considered and treated adequately, sexual transitioning would probably be greatly reduced. The role of these “comorbid” conditions tends to surface later, as trans individuals begin to question their decision to try to “transition” to the opposite sex.

“We find this out from the ‘regretters,’” said Heyer. “We don’t find it out early on. We find it out afterward when they’re seeking help … and we find out that these comorbid disorders existed early on.”

Heyer is one of nine ex-transgender individuals who recently filed an amicus brief with the Unites States Supreme Court warning that affirming transgenderism is an abusive, destructive lie: