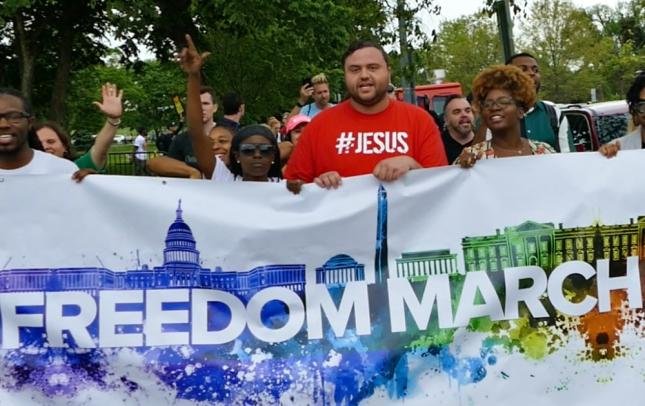 Jeffrey McCall at the Freedom March in Washington, D.C., May 5, 2018. Doug Mainwaring // LifeSiteNews

WASHINGTON, D.C., September 27, 2019 (LifeSiteNews) – In advance of the United States Supreme Court hearing oral arguments in a high-profile case about alleged transgender discrimination, a group of former transgendered persons have filed a brief hoping to disuade the court from requiring employers to affirm gender confusion.

The matter before the court is a lower court’s very liberal interpretation of Title VII of the Civil Rights Act of 1964’s prohibition against “sex” discrimination, contorting it to include “sexual orientation” and “gender identity.”

In their amicus brief, the group of nine men and women offer their personal histories as cautionary tales in order to inform the justices of the often tragic unintended consequences which occur when males attempt to live as if they were females, and females as males.

The nine – each of whom at some point in their lives “transitioned” to the opposite sex, then after experiencing regret “reverted” – are Walt Heyer, Jamie Shupe, Linda Seiler, Hacsi Horvath, Clifton Francis Burleigh Jr., Laura Perry, Jeffrey Johnston, Jeffrey McCall, and Kathy Grace Duncan.

While their plea to the court will not be given the same media attention as a brief filed by over 200 corporations such as Amazon, Apple, Disney, Starbucks, and Coca-Cola urging the court to accept the expanded meaning of “sex” descrimination in Title VII, the brief filed by the nine speaks louder and more authoritatively because it is based on lived personal experience rather than novel politically correct notions.

Affirming transgenderism is a destructive lie

“Doctors admit they do not know who will remain gender-dysphoric long term, yet they condone gender identity change, socially and medically, for youths and adults,” say the nine. “This is abuse. It is abuse to tell a person he or she can select a gender and truly become the opposite sex. It is a false hope. Such a suggestion is factually a lie, a lie with life-long destructive ramifications.”

They argue that affirming gender confusion and encouraging medical and surgical transitioning is akin to addressing an anorexic person’s needs by providing a low-calorie diet, diet pills, and stomach stapling.

The effect of such “affirmation” is the destruction of core identity. It plants the notion inside the minds of people that the essence of who they are is wrong. They are not someone to be loved or embraced, but eradicated.

In October, the nine justices will hear oral arguments concerning three consolidated cases in which lower federal courts arrived at disparate decisions concerning the termination of employees because of their “sexual orientation” or “gender identity” or issues related to those proclivities.

“Federal appeals courts are divided over the scope of protection for gay, lesbian and transgender workers under civil rights laws,” notes a Law.com report.

The brief filed by the nine specifically addressing one of the three cases, known as R.G. & G.R. Harris Funeral Homes v. EEOC and Aimee Stephens, in which the U.S. Court of Appeals for the Sixth Circuit ruled that a male funeral director who was fired after announcing his intention to dress as a woman while performing his duties at a Christian funeral home was the victim of “gender identity” discrimination.

The other two cases are:

The U.S. Justice Department under the Trump Administration is expected to argue that the term “sex” as cited in Title VII does not include civil rights protections for “sexual orientation” or “gender identity.”

The important role of faith

Perhaps the most striking – and surprising – feature of the stories of these formerly transgendered indiviuals is that they declare to the Supreme Court justices the important role their Christian faith played in escaping the harmful lies of transgenderism:

Based on the experiences of the Amici and the experiences relayed to them by many others, for people who identify as transgender, true reality is found in what is called “de-transitioning,” which involves coming to terms with and accepting one’s sex.

Indulging the transgender concept will harm those whom it is intended to benefit.