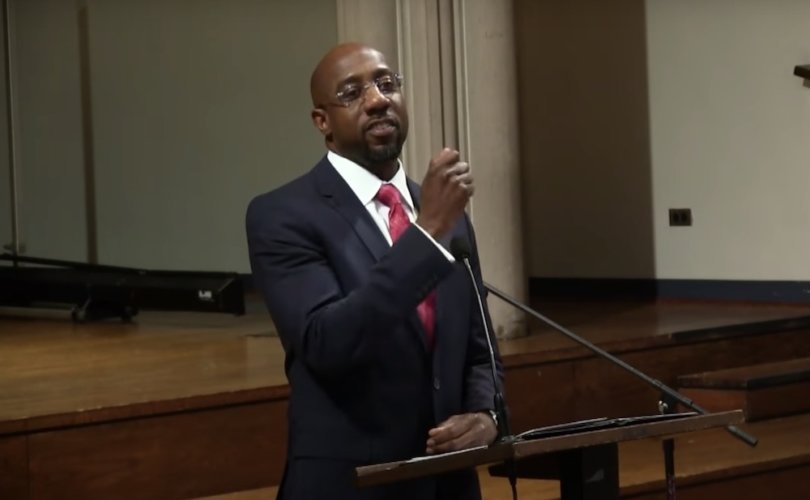 December 23, 2020 (LifeSiteNews) – Democrat Senate candidate Rev. Raphael Warnock is under fire for newly-unearthed video in which his estranged wife accuses him of running over her foot during a domestic dispute just weeks before a runoff election in Georgia that will decide partisan control of the U.S. Senate.

The footage, aired by Fox News host Tucker Carlson, came from a police body camera and captured the aftermath of an incident between the divorcing couple that occurred in March (their divorce was finalized in May).

In the video, Ouleye Warnock told officers that her husband ran over her foot during a dispute over a passport signature for taking their children to see family in West Africa.

“I don’t think so,” Warnock responded when asked about the accusation, claiming she was blocking him from closing his car door. “I don’t want to get into a shoving match with her. So I go back around, get back in the car, and I slowly start to move, like I’m gonna move forward. Then she claims I ran over her foot.”

“He’s like, ‘Ouleye, close the door. I’m leaving,’” she recounted. “And I was like, ‘just hear me out. If your mom died, and I had the kids, wouldn’t you want me to let them go with you to the funeral? And he just starts backing the car up. He wasn’t going fast, I’m not bleeding. But I just can’t believe he’d run me over.”

“This man’s running for United States Senate, and all he cares about right now is his reputation,” she continued. “I’ve been very quiet about the way that he is for the sake of my kids and his reputation. I’ve tried to keep the way that he acts under wraps for a long time, and today he crossed the line. So that is what is going on here. And he’s a great actor. He is phenomenal at putting on a really good show.”

The pro-abortion Warnock was never charged for the incident, and there were no visible signs of injury, but the revelation comes at the worst possible time for Democrats’ attempts to retake the Senate.

Warnock’s race against Republican Sen. Kelly Loeffler, along with Democrat Jon Ossoff’s race against Republican Sen. David Perdue, will decide the razor-thin margin for control of the chamber, which will in turn decide whether the incoming Biden administration is able to enact its most transformative agenda items, such as packing the Supreme Court or passing the so-called LGBT “Equality Act.”