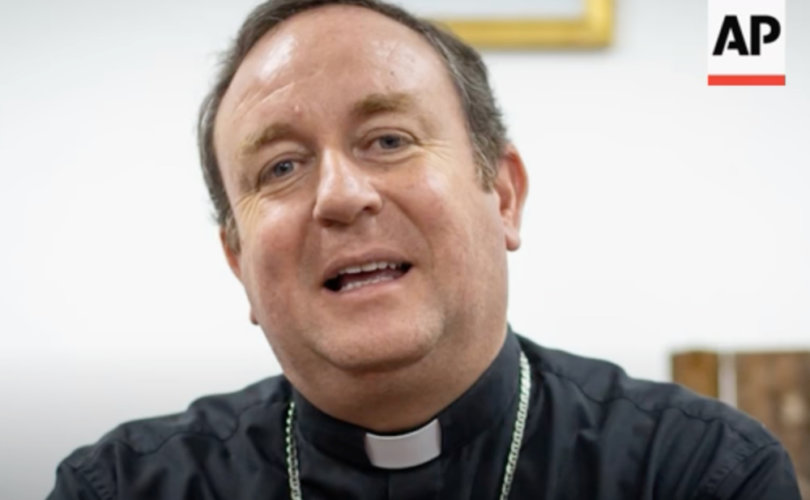 VATICAN CITY (LifeSiteNews) — In the wake of the sentencing of Bishop Gustavo Zanchetta, recently found guilty of sexual abuse, questions remain about his relationship with Pope Francis, and the manner in which the Vatican responded to concerns raised about the South American prelate.

On March 4, Zanchetta was sentenced to four and half years in prison after having been found guilty of sexually abusing two seminarians. Zanchetta, the bishop emeritus of Orán in northern Argentina, pled “not guilty” to all charges of alleged sexual abuse which were made against him.

The court’s sentencing of Zanchetta came as a blow to Pope Francis, who had lent significant public support to the Argentinian cleric.

Damian Thompson, associate editor of The Spectator, who has highlighted Zanchetta’s rise and fall in the Vatican, has repeatedly questioned why “Pope Francis’s cover-up of Zanchetta’s crimes” has not attracted more attention.

Why didn’t most members of the Vatican Press Corps publicise this? Is @austeni still maintaining that there isn’t a story here? https://t.co/H2SVnmHFS5

Thompson has drawn up a timeline of Zanchetta’s case, and the Pope’s involvement with the now-disgraced cleric.

LifeSiteNews has provided continued coverage of Zanchetta, and in light of his recent sentencing has drawn up a timeline of his relationship with Pope Francis and the Vatican over the last decade.

2013: Zanchetta was one of Pope Francis’ first appointments in 2013, when the Argentinian Pope appointed Zanchetta bishop of Orán, despite local protests, in which Zanchetta was accused of “mishandling financial matters,” according to Joan Frawley Desmond.

Yet, as Desmond notes, these protests were “the first of many such complaints against Bishop Zanchetta that appeared to fall on deaf ears.”

2015: Two years later, Zanchetta was summoned to Rome, after pornographic images of “homosexual sex,” along with “nude selfies” of Zanchetta himself were found on his phone. He excused himself as having been the victim of a phone hack, an excuse which Pope Francis accepted.

2016: A number of priests in the diocese of Orán, along with the bishop’s secretary, signed sworn testimonies confirming the existence of the selfies on Zanchetta’s phone. The priests also testified to Zanchetta’s consistent “strange attitudes towards the seminarians,” involving late night massages. They added how Zanchetta sought to explain away the presence of downloaded audio files on his phone, sounded like “panting and cries from sexually explicit videos.”

The priests described Zanchetta as “a personal friend of the Holy Father.”

Their testimony was conveyed to the Archbishop of Salta, as well as the Cardinal Primate of Argentina Mario Aurelio Poli — a “close friend of Pope Francis — along with the papal nunciature.

2017: In August, Zanchetta suddenly resigned from his diocese, citing ill health. Only a few months later he was swiftly moved into Pope Francis’ Vatican as an advisor to the Administration of the Patrimony of the Holy See (APSA), ranking third in the Curial department and having jurisdiction over various properties owned by the Holy See. Francis created the position for Zanchetta.

2019: Vatican spokesman Alessandro Gisotti claimed in a press conference on January 4, 2019, that “there was no accusation of sexual abuse at the moment of his [Zanchetta’s] appointment as an advisor [to the APSA].” The Vatican was reportedly only made aware of allegations against Zanchetta in 2018, declared Gisotti.

He doubled down and repeated the claim on January 23 after the Associated Press reported that, according to local clergy, Francis had known about the accusations since 2015. On February 24, Gisotti told reporters that the accusations were still being investigated by the Vatican.

2019: In May, Pope Francis defended Zanchetta, saying he was “disorganized” but did not in fact mishandle things economically. Francis nevertheless promised a canonical trial. The trial by the Congregation for the Doctrine of the Faith (CDF) began that year, and Zanchetta was temporarily suspended from his position at APSA.

2019: June saw Argentinian prosecutors formally charging him for “aggravated sexual assault” of two seminarians in his diocese. He was allowed to return to the Vatican “on the promise that he would return to face trial, because Vatican officials certified that he was employed there — although by this time he was suspended from his post at APSA.”

2020: Zanchetta returns to his position at APSA. No news on the progress or result of the CDF trial is made public.

2021: An internal source in APSA reported that Zanchetta had left his position in June 2021. His civil trial was originally scheduled for October in Argentina, but is delayed as the CDF refused to send requested files from its trial.

2022: After waiting for months for the CDF to assist the civil trial, prosecutors decide to proceed with Zanchetta’s trial in February, without the documents the Vatican was asked to provide.

2022: On March 4, Zanchetta is sentenced to four and a half years in prison, after the civil trial found him guilty of “aggravated continued simple sexual abuse committed by a recognized minister of religion.”

As Desmond notes, Zanchetta “received an extraordinary degree of personal attention and protection from Francis.” Following the court ruling in Argentina, neither Pope Francis nor the Vatican provided a comment on the ruling. The status of the CDF’s trial remains unknown.