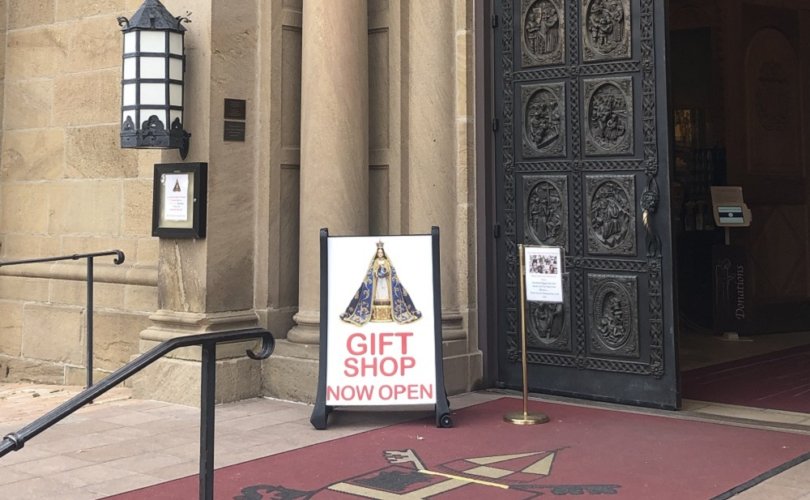 SANTA FE, New Mexico, November 10, 2020 (LifeSiteNews) — Archbishop John C. Wester recently suspended indoor public Mass and regular confession in the Archdiocese of Santa Fe for the express purpose of “protecting” people from the coronavirus, prompting public rosaries and petitions for the lifting of all restrictions on Mass and the sacraments.

The Archdiocese of Santa Fe, meanwhile, has kept its cathedral gift shop open, even while the pews of the cathedral have been roped off, prohibiting public access. A parishioner in the archdiocese, Cydni Wyatt, compared the situation to the Scripture passage (Mt. 21:12), “and Jesus went into the temple of God and cast out all that sold and bought in the temple and overthrew the tables of the money changers, the seats of them that sold doves, and said unto them, ‘It is written, My house shall be called a house of prayer, but you have made it a den of thieves.’”

Wyatt told LifeSiteNews that this situation shows that Wester, like “an unfortunate number of princes of the Church, pledges allegiance to the almighty dollar and to worldly ideologies,” and “is happy to trivialize the Holy Sacrifice of the Mass and the sacraments.”

“He either doesn’t recognize how absolutely shameful this is, which would speak to his malformation, or he, like many of his brother bishops, is so accustomed to the laity ‘rolling over’ that he no longer cares how it looks,” she continued.

The October 22 directive from Wester stated that a “rapid increase in the number of COVID-19 positive cases,” “fast-approaching” flu season, and keeping “closer quarters during the winter” combine to form an “extremely hazardous situation.”

The archbishop also recommended the delaying of funerals and weddings, limiting attendance to 10 people for exceptional cases, while making confession available only by appointment. Meanwhile, the directive allows for Catholic schools to remain open since “there has been no significant increase in the number of cases] of covid-19 in schools.”

In response to Wester’s directive, Catholic faithful have gathered every Saturday in increasing numbers at Santa Fe’s cathedral-basilica to pray rosaries “begging Our Lady’s intercession, and calling down Christ’s justice on this archbishop, who is leading many souls astray,” Wyatt told LifeSiteNews.

Wyatt wrote an appeal to the archbishop on behalf of Catholics of the Archdiocese of Santa Fe. “Now, with full knowledge of the risks, perceived or real, associated with the Covid-19 virus, and in full submission to the Divine Will of God, whether in death or life, we beg to be admitted into the Holy Sacrifice of the Mass,” she stated in the petition.

We beg to adore our Lord within the sacred walls of our Churches, to receive our Lord in the Most Blessed Sacrament in the way in which our devotion deems necessary. We beg to receive the healing balm of forgiveness in our confessionals, and to welcome our newborn babies into the family of God at our Baptismal Fonts. We plead for the rites of our dying loved ones to receive the anointing that strengthens them for their journey.

Archbishop, your October 22, 2020 press release states that these current restrictions are “in accordance with our faith’s concern for the protection of human life.” We, the Catholic faithful would respectfully remind you, that it is within each person's ability to adhere, within reason, to the state and CDC directives, and according to individual health circumstance.

We do not need our shepherds to be hospital administrators. We need you to be faithful and courageous administrators of the Sacraments, as directed by our Lord. God may not be bound by our religious practices, but in conscience, the Faithful are. We owe sacrifice to our Lord and King, and our sacrifice cannot be offered unless we are present at the Holy Sacrifice of the Mass. Allow your sheep to decide for themselves what risks they are willing to take as regards their physical health.

Allow our priests to be heroic in virtue, not by encouraging them to “shelter in place” but as Saint Charles Borromeo admonished “not to be so forgetful of your priesthood as to prefer a late death to a holy one.”

Another petition from a parishioner in the Archdiocese of Santa Fe, which has gathered almost 3,000 signatures, stated, “We worry especially for our elderly, that they will become dangerously ill due to the cold weather. We are also concerned for our fellow brothers and sisters who attend parishes where they cannot have mass outside.”

Wyatt has agreed to combine petitions, which have now accumulated a total of 3,182 signatures, before submitting them to Abp. Wester.

On October 27, Wester doubled down on his resolution to prohibit indoor Masses with a “response to concerns regarding closure of church services.” He addressed common objections to the measure, arguing that “God is not limited by His sacraments,” which is contrary to St. Thomas Aquinas’ assertion that sacraments are necessary for man’s salvation.

Wester also likened the closure of indoor Mass to a “pre-emptive healing,” comparing it to Jesus’s healing of people “even when it went against the laws governing the Sabbath.”

Wester recently congratulated pro-abortion Joe Biden as “president elect,” stating, “I am proud that for the second time in history a Roman Catholic has been elected to the highest office in the land.” He went so far as to say, “The Catholic faith has been an important part of President-elect Biden’s life, guiding him as he serves the common good.”

CNA previously reported on the Oct. 22 directive, saying, “Medical experts have told CNA that the celebration of Mass during the pandemic in the United States has been shown to be safe as long as safety guidelines are followed,” and also noted that Governor Michelle Lujan Grisham of New Mexico had not prohibited public worship.

The archdiocese did not respond to CNA’s “inquiry about whether there have been any outbreaks of the virus associated with the celebration of Mass in the archdiocese.”

“This archbishop stands as a threat to the Faith, and he claims ‘love’ drives him, but there is an order to that which we should love. God first, and then our neighbor as ourselves. This archbishop prefers to invert the order, as do many bishops today,” said Wyatt.

“As laity, we must stand athwart to him. Laity across the United States need to stand athwart to every bishop who contradicts the teachings of Holy Mother Church, and who would deprive us, in any way, of the Holy Sacrifice of the Mass and the Sacraments. NO MORE SILENCE.”