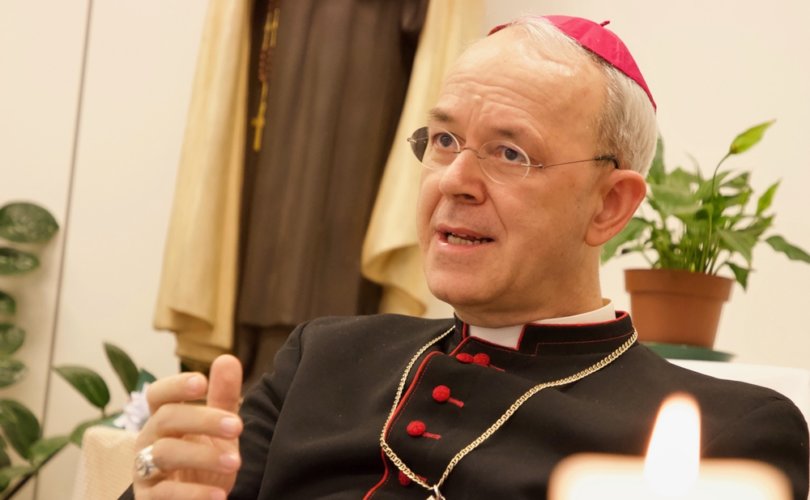 ROME, January 30, 2018 (LifeSiteNews) – In an exclusive interview two weeks after issuing a profession of immutable truths about sacramental marriage, Bishop Athanasius Schneider is inviting his brother bishops around the world to join in raising a common voice in defense of the sanctity and the indissolubility of marriage, in the midst of a “neo-pagan society” where divorce has become “a plague.”

In conversation with LifeSiteNews on Jan. 15, 2018, the auxiliary bishop of Astana Kazakhstan said: “God decides the time, and the time will come when the Pope and the episcopacy again will proclaim, with all clarity, unambiguity and beauty, the sanctity of marriage, and of the family, and of the Eucharist.”

Schneider’s comments come just weeks after he and two fellow Kazakh Ordinaries issued a Profession of Immutable Truths about Sacramental Marriage. In the document, the three bishops solemnly professed the Church’s received teaching and discipline regarding sacramental marriage and the limited conditions (see Familiaris Consortio, n. 84) under which Catholics who are divorced and “remarried” may receive sacramental absolution and Holy Communion.

They presented their profession “before God who will judge us,” in response to certain pastoral norms issued by several bishops’ conferences aimed at implementing chapter 8 of Pope Francis’ apostolic exhortation on the family, Amoris Laetitia. Some of these norms, Schneider told LifeSiteNews, give “implicit approval” of divorce and of sexual activity outside a valid marriage.

“This is contrary to Divine Revelation,” he said, adding that the “beautiful explanations” that are being presented to clergy and faithful as “discernment” and “pastoral accompaniment,” or a “change of paradigm” and “discovery of the subjective part of the truth,” when translated into “common sense language,” are tantamount to an allowance to sin.

“The sacrament of marriage, its indissolubility, and the sanctity and holiness of the Eucharist are now being touched” by the pastoral norms of various bishops “who ultimately, in cunning and veiled language, admit to Holy Communion those people who commit, intentionally and habitually, sexual acts and sexual unions outside a valid marriage,” he said.

Such language is to “give permission to sin, as Moses gave because of the hard-heartedness of the people – and Jesus Christ condemned this. How can the Apostles and the Successors of the Apostles today introduce a pastoral norm which is in substance what Moses did?” he added.

The profession issued by the three Kazakh bishops therefore comes from a “sincere desire” to offer “the truth in charity” in an evident situation of doctrinal confusion, he explained.

Schneider said he believes bishops should be able reverently to raise their voices during “important moments of the Church,” without this being interpreted as something “against the Pope.”

“We said nothing against the Pope … and I am convinced that one-day Pope Francis himself, at least when he stands before the judgment of God…will be grateful and thankful to this our voice,” he said.

He further insisted that, in issuing the profession, the bishops did not criticize Amoris Laetitia but only “one concrete norm” which gives “divorced and remarried” Catholics implicit approval “through access to Holy Communion” of their divorce and sexual activity outside a valid marriage.

“When this is evidently against the entire Tradition of the Church, it does not matter who published this,” Schneider told LifeSiteNews. “We have to say this, because the Pope is only a servant. He is not God. And he is not Christ, he is only the Vicar of Christ and he has to be faithful to his first task to transmit faithfully and without ambiguity the entire truth of the Church.”

“Real help” for the “subjective part of doctrine” is provided when bishops and priests give people “the fullness of the truth of Christ” with love and patience, and tell them the reality of their situation without condemning them, Schneider argued.

“A doctor cannot conceal the real situation of a disease,” he said. “And when he says to the patient, ‘This is your disease; I have made a diagnosis,’ no one will be offended. But this does not mean that the doctor condemns you and that he is against you. He will help you, and oftentimes we cannot cure a disease suddenly. It has to take time.”

“This is pastoral accompaniment and discernment,” he explained, adding that a good doctor will never give you a medicine that will “confirm you” in your disease. “That would be cruel,” he said.

Bishop Schneider said that to give Holy Communion to those who intentionally perform sexual activity outside a valid marriage “is a cruel medicine. This is the false medicine.” He said it is “confirming them in their disease to continue to live against the will of God, against Revelation. And this will never bring the subjective part of the truth to them. This is distorting the truth. This is not pastoral love.”

Of course, it is “more demanding” for bishops and priests to “accompany our divorced brothers for several years,” Schneider acknowledged, but he said the clergy have to give people a clear goal and patiently help them to reach it. “The goal is that you will live in continence, that you will stop offending God,” he clarified. In the meantime, he said, Holy Communion is not the proper medicine but would be the exact opposite.

Bishop Schneider also told LifeSiteNews he believes some of those advocating Communion for the “divorced and remarried” are “not so much advocates for the importance of Communion, but are using this as an implicit tool to introduce divorce into the Church,” and to grant permission to have sexual activity outside of a valid marriage, “to introduce the spirit of the world today.”

Asked how his experience growing up in the persecuted Church in the Soviet Union — often without access to the Sacraments — affects his perspective, Schneider said: “We had several years with no access to Holy Communion, but we practiced our Christian life and our prayers and we grew in faith. This was my experience. And so when these couples for some years will not receive Holy Communion, and we will help them to stop offending God with sexual activity, then we will help them.”

Since its publication on Jan. 2, 2018, one cardinal and four other bishops, including former U.S. apostolic nuncio, Archbishop Carlo Maria Viganò, have signed the profession. His Excellency Rene Henry Gracida, Bishop emeritus of Corpus Christi, Texas, is the most recent signatory.

Asked if he is disappointed by the response, Bishop Schneider said that “from a human point of view” it is a “sad phenomenon” that “so many bishops are remaining silent” or are even “condemning” the signatories.

As Successors of the Apostles, Schneider said they “could not act in another way.”

“Our conscience as bishops calls to us to do this,” Schneider explained. “We were forced by our conscience, in the conscience of the Successors of the Apostles and colleagues of the Pope.”

Given Pope Francis’ stress on the importance of conscience, Bishop Schneider said he believes the Pope “could not be displeased” with their “fraternal act of a profession of faith.”

He is therefore inviting the world’s bishops to put their names to the Profession of Immutable Truths about Sacramental Marriage, because “it would be a stronger voice for professing the constant truths of the Church, and it would be a beautiful common voice defending the sanctity and the indissolubility of marriage in the midst of a real neo-pagan society where divorce has become a plague and where sexual depravity is increasingly spreading.”

“This is a prophetic mission and call for the Church, for the bishops, to raise a common voice,” he said. “And we did nothing but repeat the constant teaching of the Church. It is a profession, and a profession of truth is not against anyone. It is only in favor of the Truth.”

Bishop Schneider concluded: “As St. Paul said: ‘We cannot do anything against the Truth’ (2 Cor. 13:18). Our conscience does not allow us. And so I hope that this voice of the bishops will increase. I don’t know when. This is in God’s time. God decides the time, and the time will come when the Pope and the episcopacy again will proclaim, with all clarity, unambiguity and beauty, the sanctity of marriage, and of the family, and of the Eucharist.”

Schneider also praised an assessment of the Kazakh initiative, written by Fr. Timothy V. Vaverek. The author noted that even though the “previous status quo was troubling,” these bishops have shown it is even more serious by issuing “an apostolic denunciation of teachings and practices advocated or approved by other bishops.”

In doing so, the author observed, the bishops have reached beyond “the limited canonical jurisdiction of their own territory” and are speaking “directly to the universal Church as Successors of the Apostles.”

UPDATE: LifeSiteNews has confirmed that all of the world’s bishops who have an email address in the Annuario Pontificio were sent the text of the profession via email. “It is up to each bishop to declare publicly his support or to issue a similar text,” Bishop Schneider said. “The public reaction of Cardinal Eijk from Utrecht could be a first example of this kind.”