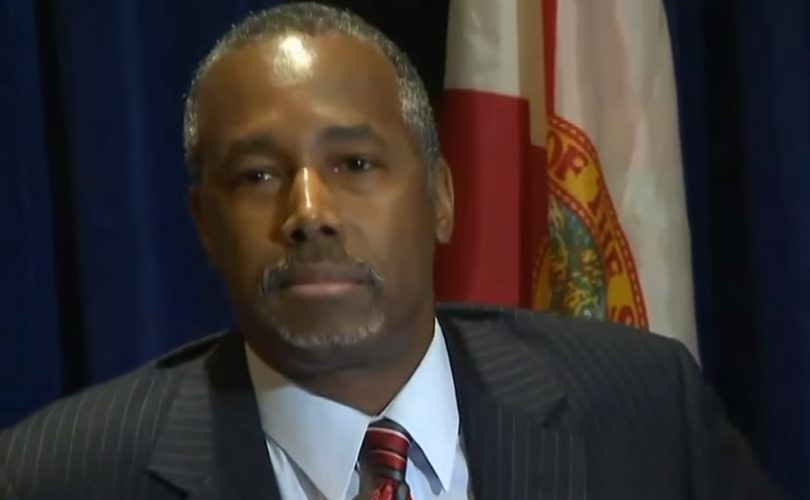 November 18, 2015 (LifeSiteNews) – Recent comments about Terri Schiavo's case being “much ado about nothing” were twisted out of context, Dr. Ben Carson told LifeSiteNews this morning.

The neurosurgeon said his remarks were actually about the media feeding frenzy that portrayed her family, and the pro-life movement, as extremists. He said he did not intend to say the fight to save Terri Schiavo amounted to “much ado about nothing.”

“I am steadfastly opposed to euthanasia. I have spent my entire career protecting life, especially the life of children,” Dr. Ben Carson told LifeSiteNews exclusively.

“I regret that my recent comments about Terri Schiavo have been taken out of context and misinterpreted,” he continued.

“When I used the term 'much ado about nothing,' my point was that the media tried to create the impression that the pro-life community was nutty and going way overboard with the support of the patient,” Dr. Carson told LifeSiteNews.

Earlier this month, Dr. Ben Carson strongly criticized media bias during a recent press conference about an inaccurate story in Politico, which the website ultimately revised.

Today, he told LifeSiteNews that his off-the-cuff remarks to a reporter from the Tampa Bay Times meant that doctors should allow terminally ill patients to refuse heroic medical treatment, not to deny food and water to someone diagnosed in a persistent vegetative state (PVS).

Terri Schiavo slipped into a coma in 1990 but was not in danger of death. A years-long series of court battles – that pitted her family against her estranged husband – raged over her right to continue to receive nutrition. In the end, Pinellas-Pasco County Circuit Judge George W. Greer ordered the “removal of nutrition and hydration,” including the Eucharist, to begin on March 18, 2005. She died 13 days later.

Over the weekend, Carson was quoted as saying, “I said at the time, 'We face those kinds of issues all the time, and while I don't believe in euthanasia, you have to recognize that people that are in that condition do have a series of medical problems that occur that will take them out.'”

“Your job is to keep them comfortable throughout that process and not to treat everything that comes up,” he said.

According to the reporter, when asked about political intervention in the Schiavo case, Dr. Carson replied, “I don’t think it needed to get to that level. I think it was much ado about nothing. Those things are taken care of every single day just the way I described.”

The reporter, Adam C. Smith, said Dr. Carson's comments were about the Terri Schiavo case, but he did not quote the specific question he asked.

The report of Dr. Carson's remarks sparked outrage in Terri Schiavo's family. Her brother, Bobby Schindler, said at the time that “at best,” Carson “spoke from a perspective of personal prejudice and ignorance.”

“Dr. Carson owes every pro-life advocate an apology,” he said.

Carson told LifeSiteNews that he would not support the judicial order in the Schiavo case. “When the patient is not terminal, as Terri Schiavo was not, the treatment plan should be determined on the basis of the consensus between the family and the healthcare providers,” Dr. Carson told LifeSiteNews. “Terri’s case should have never been turned into the media circus that we witnessed.”

“I respect the emotions of the Schiavo family and know that this is a painful and difficult issue for many who defend the sanctity of life,” he said.

That is consistent with a similar view Dr. Carson took in a Facebook post last October concerning terminally ill patients like Brittany Maynard. “Most people with terminal diseases can be allowed to die naturally if interventions are withheld and adequate comfort measures are taken,” he wrote at the time. “For example, people with glioblastoma (grade IV brain cancer) are usually on high doses of steroids. If the steroids are acutely withdrawn with the permission of the patient and family and sedation is administered, death follows quickly.”

Dr. Carson, who has sunk to second place in a new presidential poll well behind Donald Trump, told LifeSiteNews that his commitment to the right to life is not a newly articulated political position but a lifelong concern.

“For me, defending life is not just…political,” he said. “It is who I am.”

“I opposed euthanasia long before I was in the public eye, and I continue to do so today,” he concluded.