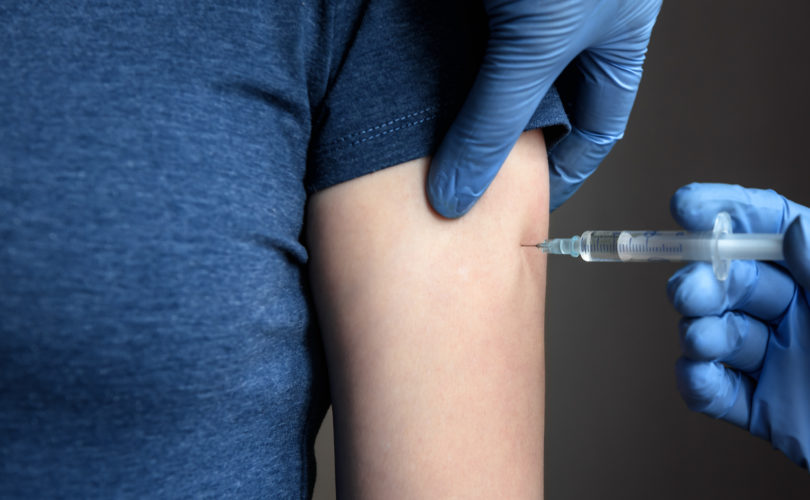 LONDON, Ontario, March 30, 2021 (LifeSiteNews) – A 24-year-old Ontario student with special needs was “terminated” from his local life skills center after expressing his choice to the center’s owner that he would not be getting the COVID jab.

London, Ontario resident Elizabeth Fildey contacted LifeSiteNews about the ordeal surrounding her 24-year-old son Isaac, who has special needs, one of which is a developmental/intellectual disability.

Fildey said that on March 23, Isaac told her that the center’s CEO, Mary-Jane MacKenzie, was talking about COVID “vaccines” with students.

“Isaac told me that she (MacKenzie) said that they could not attend unless they have the vaccine, and wouldn’t be able to come anymore,” Fildey told LifeSiteNews.

“Isaac told her he didn’t want to get the vaccine, so she told him that if he didn’t, he wouldn’t be able to attend any longer.”

Isaac had been enrolled in a day program for adults with developmental disabilities at the LifeSkills Centre, located in London, Ontario, since graduating from high school.

Fildey told LifeSiteNews that on March 25, Isaac came home with a “letter of termination of services” from the LifeSkills Centre, which he had attended for more than three years.

According to Fildey, as of March 23, nothing had been communicated with either her or her husband Rick regarding vaccines.

Fildey said that on the following day, March 24, she and MacKenzie had a call to discuss a behavioral matter regarding Isaac. It was during this conversation that Fildey said she asked MacKenzie about the COVID “vaccine conversation” she had with Isaac and the other students.

“This is the first time I'd ever heard of it, that she had addressed this, nothing had been communicated to us at this point,” said Fildey.

“So I asked her about the fact my son said she talked about COVID vaccines and that they would be required. She said, ‘Yes, I did,’ so I told her, he won’t be getting the vaccine, to which she said he ‘won’t be able to come anymore.'’’

Fildey said that she told MacKenzie it was “unfair” to demand her son get the COVID shot, and that making her son get the jab is “violating his rights under our charter.”

“She (MacKenzie) said, ‘I've had a number of parents say that if everybody did not have their vaccinations, they were going to pull their kids.’ My thought was, well, if the vaccine is supposed to be so good, why does it matter if my son doesn’t have it?”

“But when you're telling them they can't come anymore unless they get vaccinated, that’s coercion, you’re scaring them, I mean their thinking that their world’s gone. And that to me was wrong. I don’t understand why it was even done that way, and it wasn’t even made policy yet.”

During the March 24 conversation with MacKenzie, Fildey said she told her she was sending home a contract “to discuss with Isaac” and that they were to sign it. The contract was regarding his behavioral issues and had nothing to do with vaccines, Fildey told LifeSiteNews.

Fildey agreed to sign the contract but added an addendum, because the word “rules” was used, “and no rules were clearly set out in his contract.”

“Because of her recent demand for vaccinations, I added an addendum to protect my son’s rights in the event it was to be ‘understood’ that rules included an agreement to be vaccinated,” said Fildey.

It was the next day, on March 25, that Isaac gave Fildey the letter of “termination” from the LifeSkills Centre.

Isaac’s “termination” letter, a copy of which was provided to LifeSiteNews, makes no mention of vaccines at all.

The letter states, “In light of our conversation on Wednesday, March 23, 2021, we have decided to terminate our services for Isaac Fildey.”

“As per our contract, we are providing fourteen days (14) notice of this termination. Isaac's last day will be April 13, 2021.”

The “termination” notice goes on to mention that the LifeSkills Centre has “the absolute right to amend the terms of this Agreement, the starting date and/or terminate this agreement.”

Fildey told LifeSiteNews that her son’s “termination” was “a direct result of the vaccination discussion and my son’s right to refuse to be vaccinated.”

LifeSiteNews contacted MacKenzie, the owner of the LifeSkills Centre, for comment regarding the “termination” of Isaac’s attendance, asking for further reasons behind her decision to boot him out.

“We have an obligation to protect the personal information and confidentiality of our clients. We are following the best practice advice from our local health authority. We respect the right of parents to make decisions with respect to their children. We are unable to comment on this matter,” MacKenzie told LifeSiteNews.

Fildey said she is unsure about the new COVID jabs in Canada.

“When you have special needs, you're advocating for them constantly. … As a family, we’ve been discussing these vaccines coming out and just the fact that there's a lot of information that is contradictory,” Fildey told LifeSiteNews.

“It’s a very new vaccine, and you know, I am not an anti-vaccer, our son has had all his childhood vaccines, we did everything that we were supposed to do. However, this is a new quote-unquote vaccine that we don't know enough about it. You know, I just don't feel comfortable with it at this point.”

Fildey stressed that she is not against anyone choosing to receive a COVID shot but emphasized that it should be up to individuals to decide whether or not they should get one.

She also mentioned to LifeSiteNews that when she first put her son in the LifeSkills Centre she was never asked at all about Isaac’s vaccine record.

In Ontario, COVID vaccinations for the age group for which Isaac is in have not begun, a point that Fildey brought up with LifeSiteNews.

Fildey said her son has been left in an awful position, because both she and her husband work outside of the home, and leaving Isaac alone for long periods is simply not an option.

Fildey also mentioned that the mainstream media message may be “making it seem” like everyone is wanting to get a COVID jab, but the reality is that this is “not the case,” as many people have serious questions regarding vaccine safety.

Human Rights Tribunal complaint looming to fight back at 'discrimination'

Fildey says she is looking at taking action with a Human Rights Tribunal of Ontario complaint regarding her son being kicked out of the LifeSkills Centre.

“My thing here is not to shame anyone. I want to protect my son, I don’t want this to become the norm, but I am looking at a Human Rights Tribunal case now, with the help of Vaccine Choice Canada,” Fildey told LifeSiteNews.

Vaccine Choice Canada (VCC) is a not-for-profit society founded by families who have suffered from vaccine reactions or injuries. The group has been an outspoken advocate against mandatory vaccinations in Canada, as well as against COVID lockdowns.

“It is illegal and unethical to coerce anyone to take this experimental shot – to secure employment, services, freedom of mobility, or anything else we otherwise rightfully have access to, and it is especially egregious to coerce vulnerable people by denying them essential services,” VCC's Gisele Baribeau told LifeSiteNews.

“This cannot be tolerated,” she said. “I trust our various levels of government will speak strongly in support of medical choice without prejudice for all of us, and most especially for our most vulnerable members.”

Fildey has also contacted Developmental Services Ontario to ask for guidance on what she can do for her son. She was told that he is at the “bottom of the list” due to him being kicked out of LifeSkills Centre.

She also sent a lengthy letter to her local Ontario MPP, Teresa Armstrong, highlighting her ordeal and seeking assurance that there is “equivalent in funding” for her son “in the event that no other day program will accept” him.

Fildey also asked Armstrong to “tell me how you are going to protect my son’s, your constituent’s, right to choose what goes into his body given the fact that the vaccines were not tested,” and to show they “prevent infection and transmission.”

“These COVID vaccines are still in the experimental stage and neither our son nor my husband and I are comfortable with taking them at this time. Thank you for your time and your consideration of this issue. The one who truly suffers is our son, Isaac. He is deeply saddened that he’s being forced from his day program – which is pretty much his world. This is where most of his friends are and, as well as learning the skills he needs in an atmosphere conducive to special needs, it is his main social outlet,” Fildey wrote in her letter to Armstrong.

In Canada, vaccines are not mandatory at the federal level as each province is responsible for its healthcare delivery. At the provincial level, some provinces such as Ontario and New Brunswick have made certain vaccines mandatory via legislation, with a few exceptions, for children to attend public schools.

Currently, there are four COVID-19 vaccines approved for use in Canada. The Pfizer and Moderna vaccines, which both are abortion-tainted, were approved months ago, with the Johnson & Johnson and AstraZeneca shot being approved weeks ago.

This past Monday, Health Canada announced a pause of the AstraZeneca coronavirus jab from being given to people under 55 after numerous reports indicating that the product may be linked to blood clots.