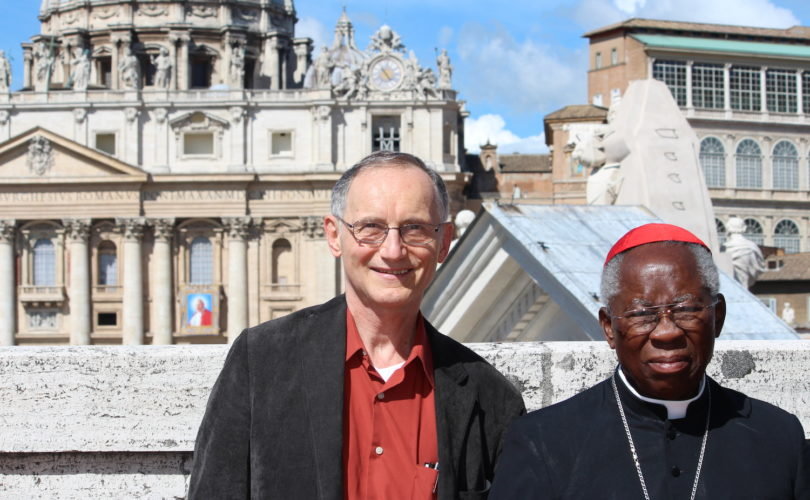 LifeSiteNews Managing Director Steve Jalsevac and Cardinal Arinze on the balcony of the Cardinal's apartment that faces St. Peter's Square

April 29, 2014 (LifeSiteNews.com) – The question of whether Catholic politicians who support abortion should receive or be denied Holy Communion has been a source of contentious debate amongst many bishops and theologians. But according to one of the Vatican’s most senior cardinals, the answer to the question is so simple that even schoolchildren intuitively know it.

In an exclusive video interview with LifeSiteNews this week, Cardinal Francis Arinze observed that he is often asked about pro-abortion Catholic politicians and Holy Communion. “Do you really need a cardinal from the Vatican to answer that?” the cardinal said he tells his questioners. “Is that really a difficult question?”

Instead, says Arinze, he suggests that people who are confused about the issue should go ask a class of children preparing for their First Communion.

“Explain it to them,” he said. “They will ask you, ‘What is abortion?’ Don’t use euphemism. Tell them what it is. It is killing a child not yet born in the mother’s womb. And then tell them if a person is for that, and says that he will continue to support the killing of such children, should such a person receive Holy Communion?”

The cardinal said that one parish priest told him he tested this out on a First Communion class, and they all responded, “No, he should not!”

“These children did not study dogmatic theology at the Catholic University of America or at the Gregorian university in Rome,” said Arinze. “And they saw immediately that killing an unborn child is wrong!”

Arinze, a Nigerian cardinal, currently serves as Prefect Emeritus of the Congregation for Divine Worship and the Discipline of the Sacraments, having served as prefect from 2002 to 2008. He was widely considered a leading contender to be elected pope at the last conclave.

Canon 915 of the Church’s Code of Canon Law states that those who are “obstinately persevering in manifest grave sin are not to be admitted to Holy Communion.”

Though some bishops and cardinals have opposed the use of the canon, the Vatican has been clear in upholding it. In 2004, Cardinal Joseph Ratzinger, then-head of the Congregation for Doctrine of the Faith, wrote a letter to the U.S. bishops exhorting them to deny Communion to pro-abortion politicians after attempting to reach out to them.

Cardinal Arinze told LifeSiteNews that he has no patience for politicians who say that they are “personally” opposed to abortion, but are unwilling to “impose” their views on others.

“This is wonderful logic that you have!” he says he responded to one politician who told him this. “It is just like me saying, ‘You members of congress and parliament, I am personally not in favor of shooting all of you, but some want to shoot all of you. I cannot impose my views on them. It is pro-choice!

“What a wonderful logic.”

“It isn’t my view. It isn’t my law,” the cardinal continued. “It is God’s law. Thou shalt not kill. Anyway, the person making that argument, if he had been killed in his mother’s womb, he would not be there to make the argument. The matter seems to me simple and straight.”

In attendance at the meeting with Cardinal Arinze in Rome were LifeSiteNews’s Managing Director Steve Jalsevac, as well as Colleen Bayer of Family Life International, who is one of the two main sponsors of Saturday's Pro-Life Summit in the Vatican City, which is being hosted by LifeSiteNews. Colleen was accompanied by her son Ben, a young man with Down syndrome.

During the interview, the cardinal also elaborated on the profound influence that Blessed Cyprian Michael Iwene Tansi, who died in 1964, had on his life.

“As a priest, he was known for great zeal in his priestly ministry,” explained the cardinal. “He preached no-nonsense homilies so that even after 50 years, we still remember some of the things he said!”